Synopsis: A young Peruvian bear travels to London in search of a home. Finding himself lost and alone at Paddington Station, he meets the kindly Brown family, who offer him a temporary haven.

- Ben Whishaw's voice work for Paddington was spot on, as he brings his own charm to the role

- The characters are likable; even the villain that you love to hate.

- The orchestration fits the feel and tone of the film perfectly.

- The cinematography and special effects used to create a story book type atmosphere was quite ingenuous.

- Paul King's direction for this film was excellent

- The humor was funny

- Like all family movies, this one still falls into a lot of cliches and tropes that audiences have seen over a million times before, which makes "Paddington" very predictable.

- Even though the characters are given likable personalities, they still have arcs that fall into some of the classic "family formula 101" cliches that you can see coming from miles away. 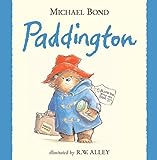 Arguably one of the most underrated family films ever made

"Paddington" may not dominate box office headlines the same way "Alvin and the Chipmunks" does. But unlike that live action CGI hybrid abomination that bastardizes the source material while falling into stereotypical tropes and cliches, "Paddington" has a lot of genuine heart to it. Sure, it still has some of the same cliches and tropes that you'd expect from a family comedy; meaning you already know exactly how the film is going to play out before you even see it.

However, it never talks down to your kids about the underlying message about the importance of family, nor does it needlessly hammer in the message using annoying characters. Unlike "Alvin and Chipmunks", this live action CGI hybrid film treats it's characters like actual people. Sure, the characters still fall into some of the same stereotypical cliché archetypes that we're used to seeing in over a million other family films. Like you have the overbearing tight a** father that won't loosen up, at first.

Of course, you have the teenager that's ashamed of her family, and she seems obsessed with how her peers think of her. You have an overly affectionate mom, and a wise hip old granny. Plus, you have a son that's full of curiosity that you know damn well is going to become Paddington's best friend. Seriously, this film is nothing if not insanely predictable.

However, the film does have some heart to it, as the characters are very likable, which is a huge positive for any family comedy. And for the most part, the film never resorts to any cheap generic jokes, nor does does it rush through any of the character progressions.

Granted, you know exactly how the story is going to end if you've seen enough family comedies before, but it's more about the journey itself rather than the destination. Regardless of how you might feel about the film's predictability, Paddington is a very charismatic character that you can't help but root for throughout the entire story.

The motion capture CGI that was used to bring him to life was fairly realistic, and it's arguably on par with any of the previous two "Planet of the Apes" films. If you haven't seen any of the trailers, then try to imagine the most realistic talking bear that you can think of, and you should have a general idea how well animated Paddington is in this feature.

Ben Whishaw voices the lovable children's character, and he manages to bring a certain charm to the role. It was said that Colin Firth was originally supposed to voice Paddington, but he walked away from the role because he didn't feel like his voice was a good fit for the character. And to be honest, I think it worked out for the best considering that Ben nails the character beautifully that it's almost hard to imagine any other voice coming out of that bear.

However, the film's greatest strength might be from the people behind the camera rather than the ones in front of it. When you watch the film, you'll quickly notice how some of the cinematography shots and special effects help create the world of Paddington, in order to give it that story book vibe.

In various scenes, it'll show you a wide angled shot of an open doll house, with members of the family doing various things in it. As the film does this, you'll hear a brief narration by Paddington about how the family is doing and etc. Plus, there's another scene when Paddington visits an elderly man at his shop, where he tells some story involving a train.

As he tells this story, the camera quickly focuses on the toy train in the room, and then slowly you start to see little miniature people walking around it like it was a miniature train station. This not only creates a story book type atmosphere, but it gives the film it's own unique charm.

Although I won't say "Paddington" is the best family comedy out there, but it's definitely worth seeing because of it's own unique charm. Unlike most family comedies these days, "Paddington" tries to tell you a heartfelt story that'll touch the heart of the entire family, without making any of the parents cringe as they watch it with their kids.