In 1976, at their peak of popularity, Paul McCartney and his post Beatles band Wings embarked on their first and only U.S. tour. “Wings over America” concerts from Seattle, Los Angeles, and New York were documented in the concert film, “Rockshow”.

“Rockshow” was released on Betamax, VHS and LaserDisc in the early 1980’s, but unavailable officially ever since. That situation has now been corrected with Eagle Rock’s new Blu-ray/DVD release of the movie.

At the time of the tour, it had been a decade since McCartney last performed live in America, (at the last Beatles concert). With four consecutive number one U.S. albums as well as the same number of American singles hitting the top spot, fans were ready to see McCartney and Wings live. The band didn't disappoint.

In the film, you can tell McCartney is greatly enjoying his time on stage. He’s seen frequently smiling, with exclamations of “oh yeah”, “well alright” and “my my my” throughout the concert. His charm and wit comes through too in his between song chats. He introduces The Beatles “I’ve Just Seen a Face” by saying, “This is known in the business as a slight toe tapper. So if anyone feels like tapping their toes, do it to this one”.And before playing the 1975 Wings hit “Listen to What the Man Said”.he tells the audience the song's ”For anybody who’d like to move around a bit. A bit of exercise. Shake your bum. Here is a song to shake thy bum to.”

Performance wise McCartney, then 34 years old and sporting a mullet hair do, is in great singing voice, especially on tracks like “Maybe I’m Amazed”, ‘Call Me Back Again’, and “Beware My Love”.From the rest of the group, Jimmy McCulloch, in particular,shines with his guitar solos during “Maybe I’m Amazed”, “My Love”, and especially on his self penned, anti drug song, “Medicine Jar”. Sadly and ironically, McCulloch died three years after tthis tour, at age 26, from heart failure caused by a heroin overdose.

What’s unique,too, is that it takes an hour and 23 minutes into the film before the group performs songs from their then two month old U.S. number one album,“Wings at the Speed of Sound”. Eight tracks from the previous Wings album, “Venus and Mars” are played before the group gets to a “Speed of Sound” track. You would think that since “Speed of Sound” was their newest release, they’d want to promote those tunes early in the set. Perhaps the band realized that “Venus and Mars” was the stronger album of the two. Of course, what better way to begin a concert than with the lyrics “Sitting in the stands of the sports arena/waiting for the show to begin”, from the “Venus and Mars” title track.

The movie also gives the audience a glimpse into the “mega rock” concert tours of the 1970’s. Dry ice drifts through the stage area at times. Smoke and laser lights swirl above the band during “Soily”, and a green strobe light flashes over the stage during “Live and Let Die”.

“Rockshow” has been restored and remastered from the original film and audio elements. Most of the movie looks very good in the Blu-ray format. At one point, the picture’s so clear that you can see the beads of sweat running down McCartney’s face during the fourth song “Let Me Roll It”. On the other hand, there are times when the picture looks a little fuzzy, especially during darkly lit sequences on stage. But this comes from the original film. The movie sounds good, with a choice of LPCM Stereo or DTS-HD Master Audio.

The new “Rockshow” disc comes nicely packaged in a small hardcover book, with color and black and white Wings over America tour photos and new liner notes. Seven songs not featured on the Betamax release are included in this new Blu-ray, making the film clock in at a little over two hours. The disc has only one bonus feature though, the 10 minute “A Very Lovely Party”, with backstage Wings footage from the L.A. Forum. That includes a visit from Ringo Starr, and short glimpses of Cher, Elton John, Harry Nilsson, and others. Dan Aykroyd and John Belushi, doing his Joe Cocker impression,and the cast of a touring company of “The Wiz” are shown performing before we assume, the Wings over America road crew. But this is never explained.

While “Rockshow” never received the critical acclaim of similar movies like “The Last Waltz” or “Stop Making Sense”, it still holds up well today. It’s McCartney’s best concert movie, and a worthwhile purchase for Wings fans and those looking to discover or rediscover their music. 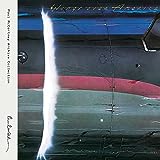