These photos were taken during my visit to Venice, Italy. My group was simply sprinting through Europe. In just 5 days, we had been through Germany and Austria, and now we were making our first appearance in Italy. I couldn't have chosen a better first stop in Italy, than Venice. This was one of our stops I was most excited about!

We stayed at a hotel there in Italy the night before, woke up, jumped on a bus that dumped us off by the dock, where we hopped on a water taxi, that shot us over to the city of Venice. This picture was taken while we were skimming along on the water taxi. A good time was had by all.

How Venice appears to float

When we arrived, the taxi dropped us off, and we began a guided walking tour of the city. We listened to our guide on walkie talkie transmitter packs (I'm sure we didn't look like tourists at all...).

While on the tour, our guide told us that even though the city of Venice appears to be floating, it is really built on wood pilings driven down into the sand and clay underwater. The logs became petrified and stone-like, due to the mineral deposits in the water. Since oxygen can't reach the logs underwater, they can't rot. The pilings were then leveled off, and were building ready.

In this photo, you can see the the Campanile, or bell tower, of the Greek Orthodox Cathedral of San Giorgio (St. George) dei Greci. It was built in 1582-1592, and started leaning almost immediately after construction.

You can even see that the tower is leaning in the photo! And I was worried I wouldn't be able to capture its lean adequately...

Later on the tour, our guide told us that St. Mark is the patron saint of Venice, but it was not always that way. He became the saint of Venice only after his remains were stolen from Alexandria, Egypt, and brought to the city.

Apparently, it was a big deal to "house" the body of a saint in your city. As a result, his symbol of the winged lion, then became the symbol for Venice.

The Latin inscription inside the book the lion holds open, reads:

Meaning, "Peace be upon you, O Mark, my Evangelist."

I remember thinking that Venice looked like it was straight out of a movie set, where every corner we turned, looked like it could be a scene from a painting.

Doing a little exploring on our own

After we were done at the glass factory, we got to do a little exploring on our own. We noticed that the entire city is connected with bridges spanning waterways like this one in the photo.

You won't find many cars here, but you will find small boats, water taxis, and gondolas. Not a bad way to get yourself from A to B.

I managed to snatch this photo really quickly on our way around the city. Flags such as this one are displayed all over, but this one seemed to catch my eye.

I used the window and flag in this photo in a painting I made after we were back stateside.

This is a photo I snapped of the Rialto Bridge. Finished in 1591, it is the oldest of the four bridges that stretch across the Grand Canal in Venice. It was built with the high arch so that larger boats could move underneath it.

This photo was taken a few seconds after the one above it of the Rialto Bridge. This view of the Grand Canal allowed me to capture some of the boat traffic and the views of the colorful marketplace.

The Palazzo Ducale, or the Doge's Palace, was built in St. Mark's Square between 1309 and 1424. It acted in all sorts of capacities while Venice was a Republic. The Palace acted as the home of the Doge (elected leader of the Venetian Republic), law court, prison, and location for civil administration.

The building was absolutely beautiful with it's intricate carvings and paintings.

After a pretty busy day, a couple of us wanted to stop wandering around, and simply watch for a while. We had seen tourists running around from here to there all day (including us), and we started to worry that we would miss actually seeing Venice.

So we found a ledge to sit on underneath the archways seen in this photo. This was one of the photos I got while we rested and took in all the sights.

I have a thing for lights... Well, light fixtures, really. So I couldn't miss this little beauty. The Doge's Palace was the perfect backdrop for this photo, but I don't think there was a spot in this entire city that wasn't photo-worthy.

It came time to head back to the water taxi, so we snapped a few last minute photos, and boarded the boat. All in all, an excellent day. 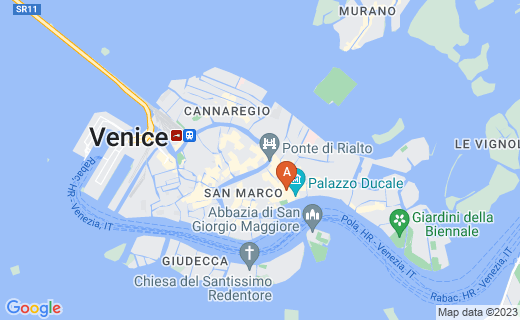