I have always enjoyed watching someone do whatever they do well! The Pirates of Penzance... is the top tier of viewing the best.

Watching the "Owning" of the roles by Kevin Kline and Rex Smith gives an inspiration to any and all performers in every mode of entertainment. They are two well groomed and fantastic actors whose careers in Stage performance overshadow many others. Kevin Kline is a brilliant actor with a long career. I have included two sites below for Rex and Kevins history.

For more info on Rex http://www.rexsmith.com/index.php

The Pirates of Penzance
Buy Now

If you have not yet treated yourself to this marvelous production in the living theatre, a must see movie production with Kevin Kline and Linda Ronstadt needs to be on your agenda. :) A Fun, upbeat viewing for many as they watched actor and actress come into charachter, "showboating" and capturing the attention of young and old alike. Many thanks for these videos for capturing the moments, but the full length movie is just what is needed for some outstanding entertainment value =)

Wikipedia On Pirates Of Penzance

The Pirates Of Penzance or the Slave of Duty is a comic Opera in two acts with music by Arthur Sullivan, its one of the Savoy Operas. The official premiere was in NY at the Fifth Avenue Theatre. The London Premier Of Pirates Of Penzance was on April 3, 1880 at theOpera Comique and it ran for 363 performances. In New York, it had already played for 3 months.

"The Papp production was turned into a film (released in 1983), with all of the original Broadway cast reprising their roles, except that Angela Lansbury replaced Estelle Parsons as Ruth. The film was not a success, but, according to the IMDB, this "had nothing to do with the reviews, which were often quite positive. The real problem lay with Universal's decision to release the film simultaneously to SelecTV and to theaters. Theater owners were so angry that they boycotted the film; in the end, only 92 theaters agreed to show it, and it enjoyed a long run at only one of them."The film has been shown occasionally on television. Another film based loosely on the opera, The Pirate Movie was released during the Broadway run." 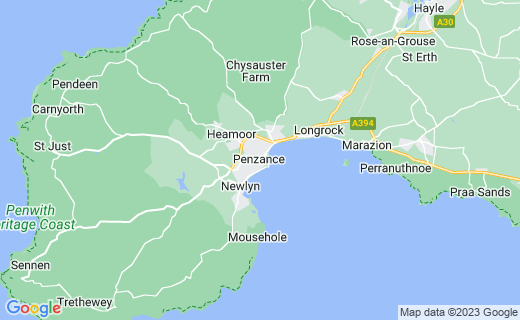 Located at the southern tip of Cornwall, Penzance is well worth exploring. The word Penzance actually means "Holy Headland" in the native Cornish language and is a reminder that the town stands close to where the chapel of St Anthony stood over a thousand years ago. Although people have lived in Penzance since at least the Bronze Age, its importance was recognized by King Henry IV, who granted the town the right to hold a Royal Market.

Located at the southern tip of Cornwall, Penzance is well worth exploring. The word Penzance actually means "Holy Headland" in the native Cornish language and is a reminder that the town stands close to where the chapel of St Anthony stood over a thousand years ago.

Although people have lived in Penzance since at least the Bronze Age, its importance was recognized by King Henry IV, who granted the town the right to hold a Royal Market.

Although it was once a major fishing town, Penzance now caters mainly for the tourist trade. Most of the town is subject to strict planning rules, so its character has been preserved without the blight of too many modern buildings and signage. Although the poet Sir John Betjeman disagreed with that last statement - he thought that the town's character had been blighted.

As befits the area, there is a midsummer festival in Penzance called the Golowan Festival. After a lapse at the end of the 1800s, the ancient customs of the golowan Festival have been revived, including lighting fires and setting off fireworks to celebrate the midsummer solstice. You can also witness street artists and see the whole town decked with greenery and other decorations. The popularity of the festival means that Penzance now attracts thousands of visitors at that time of year, so be sure to book your hotel room early if you are planning to visit Penzance at the time of the festival.

Opera fans will want to check out Penzance. As you'd expect from the title, it was the setting for the Gilbert and Sullivan opera "The Pirates of Penzance". In modern times, you can watch plays at the local Acorn Theatre, which also shows films and hosts dance music and cabaret.

Despite their name, the Penzance Pirates rugby team are now located in nearby Camborne and have therefore been renamed the Cornish Pirates.

On a more exotic note, the solo transatlantic yacht race called the Mini Transat 6.50, so called because the maximum boat length is 6.5 metres, starts its journey in alternate years from Penzance harbour.

Whether you choose to stay in Penzance itself or would prefer to use one of the many Cornish villages nearby, there are plenty of places that you can stay. These range from small, family run bed and breakfasts, often located in farms and other rustic locations, through to the larger guest houses which give you many of the facilities of a hotel but the warm welcome associated with Penzance's landladies. Or if you prefer, you can choose one of Penzance's larger hotels. Whichever of these you decide on, you can be assured of a warm Cornish welcome and the hospitality associated with it.

When you stay in Penzance, be sure to check this widerange of Penzance Guest Houses.

The Pirates of Penzance Theatrical Trailer

For contrary to popular belief, the series of light

were in effect written by the pair of nonentities

named above, Artie being the melodist and Will the

Have you ever heard the name Will Schwenk? Or the

name Artie Seymour? Probably not. But you will,

you will, when the word gets around about how

these two inglorious talents were by-passed, how

they missed being touched by the magic wand of Fate.

For contrary to popular belief, the series of light

were in effect written by the pair of nonentities

named above, Artie being the melodist and Will the

Gilbert had also dabbled in versifying; his cynical

Bab Ballads had caused a minor stir a couple of years

earlier, but the man had no real talent. Sullivan

likewise had plunked out a few tunes on his clavichord,

melodies, if one could call them that, on a qualitative

par with "Chopsticks." The consequence that Sullivan

and Gilbert have always been credited with the fabrication

of Ruddigore, Pinafore and a dozen other popular puerilities

came about through a curious chain of circumstances.

Schwenk and Seymour were eking out a precarious living

in Soho, London's "Tin Pan Alley" of its day, writing

ballads and comedy routines to be sung and performed in

the sleazy music halls at that time ubiquitous in The

City. One day the inseparable Gilbert and Sullivan, both

gentlemen of quality-but also scoundrels, as will be

seen-were slumming along Carnaby Street when through

an open window they chanced to hear Seymour and Schwenk

in the throes of composition. The two were concocting a

humorous playlet supposedly set in Morning Court, with a

parade of panderers, prostitutes, and their pettifogger-

solicitors passing before the judge, singing and acting

out their diverse woeful tales.

The eavesdroppers stood by, taking copious notes and

committing a good earful to memory. They then retired

to the Music Room of their club, and by dint of a few

ingenious switcheroos and an abundance of gall, came

up with their first opus, the well-known Trial by Jury.

It was not mere coincidence that in this year of 1875

the element Gallium was discovered by the French chemist

No, scratch that-perhaps there was no connection between

the two events. In attempting to set history straight,

one is occasionally touched by mild paranoia.

It was extremely bad form for two well-dressed gentlemen

to be seen loitering about Soho streets and alleys for

hours on end, and it wasn't until the invention of the

microphone in 1877 that the two plagiarists were able

to upgrade their method of filching Will's and Artie's

as a pair of itinerant quill-pen inspectors, they

persuaded the gullible landlord of the Schwenk-Seymour

flat to let them in while the two were absent.

They quickly installed a "bugging" device (probably the

first instance of Edison's invention being put to such

use), leading its wires to a nearby flat they had rented

for just such an eventuality.

Will Schwenk and Artie Seymour continued to grind out

the insatiable but poorly-paying music-hall trade. A

and then rewrote, revised and disguised the arduously-earned

creations of the talented pair. H.M.S. Pinafore, The

Ida followed one another in almost annual succession,

elevating G and S to the pinochle of success, if one

may be permitted a small witticism at this point.

It must be emphasized that although the Gilbert and

publicized among the middle and upper classes of

did not move in those genteel circles, nor did the

raucous but appreciative audiences who patronized the

various music halls and amusement centers where the

latter's compositions were being staged. In 1885 the

game came close to discovery when a discerning critic,

after a night of pub-crawling, remarked in his newspaper

column on the similar melodic line in The Mikado's "I've

tracked the clue to its source.

that he built a theater, the Savoy, exclusively for the

players traveled throughout the English-speaking world,

and every performance was a sell-out. The works were

easily translated into other languages; the plots were

simple, the tunes hummable, and the patter-songs lent

themselves readily to other tongues. On one signal date

there were 148 Gilbert and Sullivan operettas being

performed simultaneously (aside from time differences)

in fourteen languages in theaters all around the world.

The money rolled in, augmenting the personal fortunes

of the two cultural swindlers, but none of it trickled

down to the actual fabricators of this immensely popular

frothy pabulum, Seymour and Schwenk, who continued their

daily efforts to make ends meet. Daily the results of

their endeavors were siphoned off by G and S.

Ruddigore, Yeomen of the Guard, and The Gondoliers followed

The Mikado, but by 1889 the two so-called gentlemen, now

both wealthy and portly, had wearied of the years-long

his efforts to the construction of children's mechanical

toys, most notably the Erector Set. Sullivan wrote "The

Lost Chord" and the dirge like music to Sabine Baring-Gould's

hymn "Onward Hebrew Soldiers" (-Marching as to war/With the

Star of David/Going on before, etc.), although Ms

Baring-Gould, under strong pressure from the Church

of England, was induced to revise the title and lyrics

of the latter work.

Will Schwenk and Artie Seymour died in Obscurity, a small

industrial town in the Midlands, never having discovered

nor even suspected the thefts of their labors over that

Author's Note: For the musical-knowledge-deprived, Sir

were in fact the actual lyricist and composer,

respectively, of the named operettas.

Away Away My Hearts On Fire