Animated movie fans love Hayao Miyazaki. In 2008, he brought us Ponyo, a story which is based on the Danish story of The Little Mermaid.

In this tale, a five-year old boy named Sosuke finds a gold fish, which he adopts as a pet and names Ponyo. However, it turns out that Ponyo is no ordinary gold fish but rather a gold fish who really, really, really wants to become a princess and be Sosuke's friend.

A simple and quiet movie, featuring beautiful Japanese animation by well respected Miyazaki. On this page, find more information about the movie, the official trailer and reviews from ordinary movie viewers like you and I as well as from the experts.

Click here to order your copy of Ponyo from Amazon on blu-ray or DVD.

Fast Facts About The Movie, Ponyo

"Welcome to a world where anything is possible! Academy Award winning director Hayao Miyazaki and legendary filmmaker John Lasseter together with Disney bring to life a heartwarming and imaginative telling of Hans Christian Andersen s classic fairy tale The Little Mermaid. A young boy named Sosuke rescues a goldfish named Ponyo, and they embark on a fantastic journey of friendship and discovery before Ponyo's father, a powerful sorcerer, forces her to return to her home in the sea. But Ponyo's desire to be human upsets the delicate balance of nature and triggers a gigantic storm. Only Ponyo's mother, a beautiful sea goddess, can restore nature's balance and make Ponyo's dreams come true. Ponyo will delight your family with its magnificent animation and timeless story."

"Well worth watching, and a very lovely and simple introduction to the work of one of the most inventive and important animated storytellers alive." ~ Nathan Andersen

"Miyazaki's films are refreshing for there even pacing and tempered characters. A far cry from the neurosis of Disney characters where everyone is shouting and riding on high octane. Ponyo is almost completely silent in its first 10 or 15 minutes, and even when the dialogue begins it has more of a sobering effect. If you pair that with the gorgeous hand drawn characters and hand painted backgrounds you suddenly remember what animation felt like twenty-plus years ago." ~ Sniff Code

"Ponyo is simpler and more childlike fare than most of Miyazaki's past films, but it's still a sweet and lushly-animated piece of work. At the very least, it will transport you to a magical childhood." ~ E.A. Solinas

Well, you would think of course, that a movie like Ponyo MUST be appropriate for young children. However, the Movie Mom said, in her review of Ponyo, "Parents should know that even though the movie is rated G it is not for the youngest children. There is mild peril, a flood, some images that the youngest children might find frightening including children separated from parents and family tension, though no one is hurt."

Common Sense Media said, "Parents need to know that this stunning adventure from anime master Hayao Miyazaki is one of his most kid-friendly films to date, with strong characters and positive messages. There's little violence, although a few scenes during and after a climactic storm may disturb the youngest viewers. Some scenes in which parents and other characters seem to be missing might also be upsetting."

I agree that parents should be aware. When I was watching, I wondered if young children would find the menancing waters scary. That being said, The Movie Mom did, in the end declare this movie acceptable for all ages and Commen Sense Media recommended it for children five-years old and up. If you have any concerns, as always, I recommend previewing the movie before showing it to your very young children.

Michele Johansen of the Seattle Examiner, said "If you're looking for a new type of movie to take your kiddos to, or looking for any movie at all, Ponyo is worth your time and money. It's fresh, original, and overall sea-worthy (pun intended)." She said her two and four year old daughters enjoyed it and that there was plenty of laughter from the other children in the audience.

Alonso of Today said, it "is a sweetly lovable and visually trippy movie that young tots and their parents can enjoy in equal measure."

Click here to order your copy of Ponyo from Amazon on blu-ray or DVD.

I agree with the reviewers on Amazon, this movie is perfect for a plush toy and it is somewhat unusual for Disney to pair a movie and a toy. If you and your children loved Ponyo, you may want to consider buying this gift set. Alternatively, if you are looking for a movie to give to a child and it doesn't feel like a movie alone is quite enough, then this would be a fantastic choice.

Ponyo On The Cliff By The Sea Movie Soundtrack

Featuring the work of Joe Hisaishi.

"...behind every great movie (with some exceptions) is a great soundtrack. This was one of the few movies that I've seen where I had to buy the soundtrack immediately after seeing the film. The music is absolutely breathtaking and beautiful. It's angelic, and it's such a breath of fresh air when so many movies have such mediocre soundtracks. The combination of Miyazaki and Hisaishi is so perfect." ~ James G 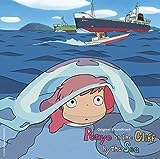 Have YOU seen the movie Ponyo? What did you think?