Under the Cherry Moon was released on July 4, 1986 and grossed only 10 000 000$ at the box office. It came as a huge disappointment, considering that Prince was then at the height of his popularity and the huge success of Purple Rain less than two years before (a film that grossed over 68 000 000$ and won an Oscar). The film was destroyed by critics and won plenty of Razzie Awards. Does it deserve the hate ? No way. This film is amazing, and if you consider yourself a Prince fan, then this is a must-watch. Here is why !

The movie's plot is very simple ; gigolo Christopher Tracy (Prince) wants to meet and marry Mary Sharon (Kristen Scott-Thomas) for her money, as her dad (Steven Berkoff) is very rich. Of course, Tracy ends up falling in love with Mary while her dad tries to sabotage their relationship... Does it remind you of something ? It should. I was stunned by how the plot is basically the same as the Richard Gere film American Gigolo (1980). However, the film is stylistically very different. It is a comedy aimed at recreating classic ones from the 40's (so it's expected to be silly and it is). Under the Cherry Moon is shot entirely in black and white and was filmed at the French Riviera, an area known for its beauty and rarely seen in american films. The film looks stunningly beautiful at times and I wonder how it would have looked like in color. There is impressive costume design displayed here, as everything Tracy or Mary gets to wear looks amazing. Prince won the Razzie Award for Worst Actor in 1986 for this movie. While he is far from a great actor, his performance here is rather funny and always riveting. This guy owns every scene he is. Jerome Benton plays literally the same character as in Purple Rain (here called Tricky) and I thought that while he was quite annoying sometimes, he has some funny scenes and makes a great comedic duo with Prince. Some scenes are genuinely funny (the Wrecka Stow one is always pointed as a highlight) while others are just bizarre. No matter how odd some of it parts are, the film remains hugely entertaining. Kristin Scott-Thomas gets her first role ever in this film. She does a fine job while always looking absolutely gorgeous, beating other Prince leading ladies like Apollonia from Purple Rain or Ingrid Chavez from Graffiti Bridge. Her romance with Prince his quite believable, something that was crucial in order to make the film work. I was surprised to see that Prince is also the director of the film (he fired Mary Lambert due to creative differences at some point during filming) and by how great he is at it. Some shots are impressive and the movie always looks elegant. This film is really easy to follow and just fun to watch. There is no deep meaning here or anything close to it ; it is simply thrilling to witness the work of a creative genius in full swing while he was at the height of his fame and power. The result is an often funny, sometimes strange, but always thrilling piece of art. 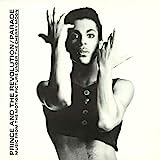 Parade: Music from the Motion Picture "Under the Cherry Moon"
Buy Now

While the film was shattered by critics, its soundtrack (the album called Parade) was hailed as another masterpiece by Prince. It certainly is and stands the test of time extremely well. The album was the commercial success the film failed to be ; it sold 2 million copies and reached the 3rd position on the US Billboard 200. Parade sounds very different than anything Prince recorded before, as it contains few electric guitar parts and a lot of classical elements (courtesy of Clare Fischer) that fit well the french setting of the film. Its first single, Kiss, reached the 1st position on the pop charts and remains one of Prince's best known tracks. Funny fact : the song was originally given to the band Mazarati, but Prince liked the version they recorded so much he decided to keep it for himself at the last minute. It proved to be a wise decision. The other big hit from the record is Mountains and it is an absolute gem. It's one of my favorite Prince tracks. The beat is hypnotizing and displays the impressive talent of Prince's band The Revolution. Parade would sadly be the last album released by the band (but not the last one they recorded...) before Prince decided to go solo for 1987's Sign O' The Times. Another favorite of mine is the party song Girls & Boys, which is the only song performed in the movie by Prince & The Revolution. The last song on the record, Sometimes It Snows In April, is Under the Cherry Moon's own Purple Rain. It's an incredibly touching song about how good things never last or loss and death in general. The untimely passing of its creator in 2016 makes it even more troubling and it remains one of Prince's most heartfelt vocal performance to my ears. The other tracks from the album are all very good and help create a pleasant atmosphere that stays with you once the album is over. There were other songs written for the film but not included on the soundtrack ; worth checking out are Love Or Money and the instrumental Alexa de Paris. Parade is one of the few Prince albums I like to listen to in its entirety. This is a must-have. For your listening and viewing pleasure, here is the performance of Girls & Boys as seen in the film :

In retrospect, it is easy to understand why the movie bombed. After all, it is a black and white comedy with plenty of dialogue in french with subtitles and a few musical parts. Audiences were expecting something more in the vein of a Purple Rain sequel and didn't know how to react to this bizarre movie. Speaking of a Purple Rain sequel, it got made in 1990 and is called Graffiti Bridge, a film that fared even worse at the box office and with critics. I tend to agree with critics about Graffiti Bridge ; it is awful and rightfully so shattered Prince's acting career. Under the Cherry Moon is a totally different thing, a surprisingly stylish and funny movie that features a killer soundtrack and an entertaining performance by the Purple One. Don't skip it !

What do you think of Under the Cherry Moon ?