Que Sera, Sera Whatever Will Be, Will Be - Memories with Mum

This song has been my all time favourite. My mum taught this song to me when I was a little child and also mentioned that it has been her all time favourite. In my early childhood days, we never had any means through which we could either listen to or download this song. My mum has always been on the look out for cassettes which would have this song, but never was lucky enough to have one. When I first saw this video on the internet, the first thing I did was to email my mum, and also send her an mp3 format of this song so that she could listen to it whenever she wished to. I could feel her happiness, even from a far off distance over the telephone.

This song was written by Ray Evans and Jay Livingston and Doris Day sang this in the Alfred Hitchcock movie The Man Who Knew Too Much. In the movie, she was putting her young son to bed. Livingston got a call from Hitchcock, who told him that he was going to use Doris Day in lead role in that movie, which Hitchcock definitely did not want, but had to go by the command of his agency that was offering him a job. So they wanted a song for Doris Day, since she was a singer. Hitchcock also suggested that he wanted the song to have a foreign title because the leading role Jimmy stewart of that movie was an ambassador who goes all around the world.

‘Que Sera, Sera’ is a phrase taken from the movie called The Barefoot Contessa, where the character Rosanno Brazzi’s family motto wa ‘Che Sera, Sera’. Evans and Livingston changed the Italian ‘Che’ to Spanish ‘Que’ because more people spoke Spanish in the US. This phrase also appears as ‘Che sera, sera’ in the sixteenth century English play Doctor Faustus by Christopher Marlowe. However this phrase seems to transmit a fatalistic conception on the future ‘what has to happen, will happen’.This song became Doris Day’s biggest hit. She did not want to record that song, since she thought it was a children’s song, but due to the pressure from the studio, she finally agreed to record it.

The song reached the Billboard magazine charts in July 1956 and received the 1956 Oscar Award for the Best Original. It was the third Oscar in this category for Livingston and Evans, who previously won Oscars in 1948 and 1950. Also Doris Day's character sang it to herself in a scene from the 1960 film Please Don't Eat the Daisies. The song later became the theme song for her sitcom The Doris Day Show, which ran from 1968-73.

10 years later, this song was performed by Mary Hopkin, which was a very nice performance. Also this song was sung in French by Jacqueline François which became big﻿ hits in France. A remix of this song also was released in The Album (2002) of the Hermes House Band which is a Dutch party band established in 1984 by members of the Hermes student society in Rotterdam, The Netherlands. 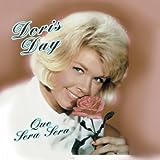