The implosion of Queensrÿche certainly ranks as one of the messiest musical divorces in recent memory. In case you haven't been keeping up with this ongoing saga, here's a brief recap of the drama surrounding these '80s rock stalwarts, and the unusual circumstances that led to the release of 2013's "Queensrÿche" (note the quote marks) CD, Frequency Unknown.

In mid-2012, the Seattle prog-metal band best known for the Operation: Mindcrime concept album and the early '90s hit "Silent Lucidity" suddenly announced that they'd fired lead singer Geoff Tate, claiming that his erratic behavior had caused unbearable working conditions within the band. While they replaced Tate with new vocalist Todd La Torre and began moving forward with plans to record a new studio album, Tate sued his former band mates to claim ownership of the "Queensrÿche" brand name. The rest of the band filed their own countersuit and a Washington State judge ruled that until the naming dispute was settled there was no legal barrier preventing Tate from assembling his own version of "Queensrÿche" and continuing to use the name.

Tate was soon back out on tour as "Queensrÿche" with a new backing band, and quickly scored a new recording contract with Deadline Records, a sub-label of L.A. based rock indie Cleopatra Records. With a variety of studio musicians and celebrity guests in tow, Tate banged out a new "Queensrÿche" CD - dubbed Frequency Unknown - in a matter of weeks and rushed it into stores in late April of 2013 -- a full two months ahead of the "other" Queensrÿche's first album with Todd La Torre.

In other words, Geoff Tate was successful in firing the first shot in the War of the Queensrÿches... but was the album any GOOD?

Given its controversial, created-by-committee origins, it's my opinion that Frequency Unknown shouldn't be reviewed as a legitimate "Queensryche" album, as it was obviously not a "band" effort. It's a hastily-assembled collection of songs performed by a cast of hired guns, led by a guy whose sole purpose in creating the record was to give the middle finger to his old band. (I sincerely doubt it's a coincidence that the album title's initials are "F.U."!)

That said...whether you view F.U. as a rush job, a glorified Geoff Tate solo album, or a vanity piece, it still somehow manages to be more listenable than the last couple of "real" Queensryche albums. Of course, if you've ever heard 2009's American Soldier or 2011's Dedicated To Chaos, then you know that's faint praise.

Three of the songs on Frequency Unknown are actually pretty damn good. Unfortunately, you have to slog through a lot of middling material in order to find the gems.

The album opener "Cold" starts things off on the right note, building around a nice chunky guitar riff and featuring one of the catchiest choruses on the record. Tate co-wrote this song with one-time "Rock Star: Supernova" winner Lukas Rossi, and he was smart to put this track in the leadoff position on the album. Unfortunately, by doing so he writes a check that the rest of the album can't cash.

"Slave" jumps out at the listener from the album's midsection, once again due to its infectious chorus - which salvages what would've otherwise been a strictly average, chug-a-lug hard rock song. I actually find myself humming the refrain to this song ("You're a slaaaaave to the light...) at random intervals.

The late-inning winner is the lovely "Everything." Despite the tinny-sounding canned drums that open the track, the plaintive piano and overall theatrical feel of this cinematic ballad, reminiscent of prog-metallers Savatage, rises out of a clutch of mediocre songs like a flower suddenly sprouting from a crack in a city sidewalk. This one is tied with "Cold" as my favorite song on F.U.

Aside from the aforementioned three songs, the bulk of Frequency Unknown is fairly bland. Some members of Tate's camp had hyped F.U. as being "stupidly heavy" while it was in the works, but if fans were hoping to hear G.T. getting back some of his metal mojo they're bound to be disappointed, because the majority of the album is stuck in the same watery sounding late 90s alterna-metal rut that Queensrÿche has been mining endlessly since at least Hear In The Now Frontier (1997).

Tate appears to be taking lyrical pot shots at his former band mates throughout F.U., particularly on the irritating "Dare" in which he boasts "I don't give a f**k about the threats you're throwing round... take me outta context, I'll put you down, take you out," and the passable "Fallen" ("You ain't nothin!"), which features a nice guitar solo by Dave (Y&T) Meniketti. In fact, many of the lesser songs only come alive when a stunt guitar player comes in for a solo, as when Ty Tabor of King's X turns up on "In the Hands of God," or Brad Gillis of Night Ranger appears on "Life Without You" (which would be a much better song without Tate's constant, breathy-voiced pleas of "Are you ready? Are you?", which get kinda creepy after a while.) Even K.K. Downing of metal royalty Judas Priest drops in to lend his axe to the otherwise unremarkable "Running Backwards." However, even a guest solo by the great Chris (Megadeth) Poland can't save the weepy, self important "Weight of the World," in which Tate bemoans his fate of having "the weight of the world on my chest," as if we're supposed to feel sorry for him. Ugh.

After "Weight of the World" ends the album proper, Frequency Unknown concludes with four "bonus tracks" - newly re-recorded versions of the Queensrÿche classics "I Don't Believe in Love," "Jet City Woman," "Empire" and "Silent Lucidity." All of the instrumental tracks on these cover versions was performed by one guy - Martin Irigoyen (who?), which would probably be more impressive if said performances weren't so sterile, lifeless and karaoke-worthy. It goes without saying, obviously, that none of the four re-treads is better than the original versions. Tate has sung these songs thousands of times over the years, which may explain why he sounds like he's merely punching a time clock. Additionally, if you play these versions back to back with the original recordings, you can hear how much range Geoff has lost over the years. 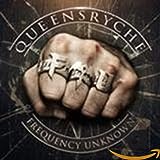 So Is It Worth Buying?

Considering that it was stitched together Frankenstein-style in a rush by a large group of contributors rather than an actual "band," Frequency Unknown is still occasionally an interesting listen, even if the reason it's "interesting" is more due to its "what the f*ck?" curiosity factor than due to any musical merits.

In April 2014 the battle over the Queensrÿche trademark was settled, and Tate's former bandmates - with their new vocalist Todd La Torre - were awarded the rights to continue recording and touring as Queensrÿche. Therefore, Frequency Unknown will be the final recording that Geoff Tate releases under that banner. As part of the agreement, Geoff maintains the exclusive right to perform the band's Operation Mindcrime I and II in their entirety in concert, and he was allowed to continue touring as "Geoff Tate's Queensrÿche" till late 2014 in order to fulfill concert dates that had been booked prior to the settlement. Time will tell whether or not this unique circumstance results in Frequency Unknown being re-issued under Tate's own name, or if copies of it with the "Queensrÿche" name become collector's items.

In mid-2014, Geoff adopted "Operation Mindcrime" as the new name for his band, and they began working on a trilogy (!) of concept albums for the Italian melodic-rock label Frontiers Records. Whatever band name he uses, Tate definitely needs to come up with stronger material for his next recorded outing. Morbid fan curiosity will only get you so far and with Frequency Unknown, I think even his most patient supporters may have reached their limit.