Overlooked and underrated movies are speckled amongst the sea of bad horror. Allow me to steer you in the direction of some good films.

Happy Hunting takes you with Warren, an alcoholic who needs to get to Mexico. Having learnt his ex-wife has died and that he has a daughter he never knew about, he leaves behind his crappy life to go and see her.

Half way there, he stops in Bedford Flats. The people there seem friendly enough and there is an upcoming hunting festival everyone keeps mentioning.

When his old life begins to catch up with him, he finds himself in a situation he wasn't expecting.

Genre: Described as an American Western Horror, I'm more inclined to say it's an Action-Thriller.

My Thoughts On Happy Hunting

The writers and directors Joe Dietsch and Louie Gibson's feature début didn't show in theatres. Happy Hunting also lacked in marketing. For such a clever and well put together film, it's absolutely not receiving the attention it deserves.

Sure, Happy Hunting is not an original concept. In fact, films, where people get hunted for sport, are made a million times over. Most movie lovers have seen the likes of big-budget films like The Hunger Games (2012), The Running Man (1987) and The Purge (2013.) But for die-hard fans of horror fuelled action, Happy Hunting is definitely one to add to your watch list.

This movie taps into many of society's issues, like crime, homelessness, and addiction. These issues are combined with a strong plot, some great acting, and some fantastic cinematography. It grabbed hold of many concepts within this theme and delivered them with some wonderful, dark satirical finesse.

Having this film set in the desert made me wonder how the guys behind the camera managed to create the level of drama and capture the desolation so beautifully, but they did and they did it well.

This film is low on gore but still manages to make you wince at the mental picture of some of its ill-fated members with remarkable accuracy. Although it doesn't sway from generic casting, this film even plugs in some nice surprises; such as a 'Negan' style bat (well-known if you are a fan of The Walking Dead) and some hunters stopping for selfies with their hunt.

Martin Dingle Wall is the Aussie actor who plays Warren and he spins his character from protagonist to antagonist and back again multiple times with ease. I pitied and championed Warren depending on how I felt about his state of affairs at the time. Certain scenes made me think of McGuyver if of course, McGuyver was a booze-guzzling alcoholic. In any case, his wily ways entertained me throughout.

Instead of blood and guts filled gore, I had a story to bite into. Within the many back stories, they helped create a solid connection with the main cast. The rest of the characters are a well-collected bunch of unknowns. One guy stands out— Junior, played by Kenny Wormald.

I happened to google him afterward and learned that he is actually a dancer. You wouldn't know it though, he plays the role of eager-beaver-child brought up in a closed-off community well and with a certain comedic flair. It would be great if I spotted him in future films, given that I enjoyed his performance so much in this.

About halfway through this unique, nasty little gem that I became concerned about how it may end. A films final scenes can make or break it. How would this one end? I'd invested myself into the welfare of Warren. Would it be disappointing if Warren lived or died? Would I be angry if he escaped and went skipping into Mexico? What if he checked into rehab so he could reunite with his long-lost daughter? As the film climaxed into some foreseeable outcomes and some not so foreseeable moves, I waited.

This film did not disappoint. This is a seen a done before thrill-ride that you'll enjoy, I guarantee it.

I give Happy Hunting 4 bear traps in the desert out of 5. 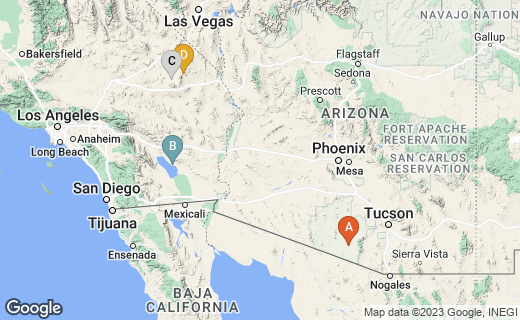 The movie was shot mostly in Bombay beach and the closest desert is Sonoran Desert.

Filming took place in Bombay Beach and various deserts, however, filming only took 23 days so I doubt they went too far away from Sonoran Desert.

Very close to Bombay Beach, this desert could also be a filming location.

Filming took place at numerous locations, this one is also close by Bombay Beach.