It was New Year's Eve 2000; as the Twentieth Century was drawing to a close, I found myself idling in front of my Web TV unit (I was too poor to afford a computer at the time), checking out a website I had discovered a few years earlier called I.U.M.A. (short for Internet Underground Music Archive). Before Youtube, Facebook, Garageband, and Myspace, I.U.M.A. was a place to go to check out unsigned bands from all over the world. Each band had its own page along with MP3 excerpts of some of its music. Sadly, though I went on I.U.M.A. frequently, I must confess I did not expect to hear anything great at that point. By 1999, I had resigned myself to the fact that great, epic Rock was a thing of the past, and that all there was left to do was to amuse oneself with the pathetic attempts at making music that the average band of the day engaged in.

The search filter at I.U.M.A. Enabled one to search for bands according to genre and then, once one settled on a genre, one could further refine one's search by either focusing on a region an artist was from or by the letter of the alphabet that the artist's name started with. That night I decided to search for Progressive Rock bands, whose name started with the letter K. Other than resolving to play the guitar, it was one of the most fateful decisions I ever made in my life for, by doing so, I discovered the music of Ryan Kickland.

The I.U.M.A page Kickland had at the time was showcasing the music from his first album 3D Collapsing Star. I clicked on the first track, and my jaw almost hit the floor. While most bands on I.U.M.A. may have consisted of competent musicians, there was this bar of quality that they could just not seem to clear. It was obvious from the first listening of Kickland's music that he was able to pole-vault way over it. Perfect songwriting, perfect musicianship, perfect production: the man had it all, and listening to the subsequent tracks only confirmed that belief.

In many ways, I feel 3D Collapsing Star was the record that kicked off what I call the Post-Commercial Era of Rock, an era in which the kind of epic Rock, normally under the aegis of the major-label system, struck out on its own, where it has been ever since. Indeed, if one were to survey the musical landscape over the past sixteen to twenty years, one would see dozens of new, epic bands plying their trade such as Animalcule (Ryan's subsequent band), The Want, Heaven And Earth, The Quill, Witchcraft, Dozer, Danava, The Darkness, and The Sword to name a few. Sadly, it seems it will only be in hindsight that these bands will be appreciated. When one thinks of the various decades that get name-checked by fervent Rock aficionados, the decade of the 2000s is always at the bottom of the list. To be sure, if one only sees what was on the surface of Popular Music during this period, it is understandable that many an unenlightened Rock fan would think so. However, in the distant future, when musicologists look back at this time, it will be seen as something of a golden age. Though the progenitors of epic Rock may have occurred in earlier decades, it was in the decade of the 2000s when bands en masse (such as the aforementioned ones) took all the empirical knowledge accrued from all the past eras and parlayed it to make a slough of solid, consistently amazing albums. What a shame the average Rock fan has failed to see that.

I started this blog to support such bands; so what better to start off reviewing than 3D Collapsing Star?

Starting off the album is the song Now Then. A song about release and revelation, the track begins with guitar dyads, which flutter about ones ears like golden yods being sprinkled down from Heaven. Then, like a Hoover Dam's worth of pent-up psychedelic energy bursting forth, Ryan's aggressively cascading rhythm-guitar and haunting vocals kick in. Back in 1999, hearing such an amazing song in such a musical wasteland was quite a moving experience I can assure you.

Next comes the sportive track Crumbling Pages. Like a modern-day sea-shanty, its rollicking guitar and vocal figures playfully rise and fall like a piece of flotsam bobbing up and down on the ocean. Using his Syd Barrett/David Bowie influence to its best advantage, his song manages to be gentle and whimsical yet epic and stirring at the same time.

Like a lullaby for those about to engage in astral-projection, Space Station sends one soaring into the cosmos. Peaceful yet sublime, Kickland's guitar and vocals weave a vivid picture in The Mind's Eye of floating above the earth. Especially of note is Kickland's adroit use of the Morley Echo Plus (a devise one hooks up to the electric guitar) to enhance the spacey mood.

In addition, ones sees in these first three tracks something that was to be a hallmark of Kickland's recorded work: that of economy. The sign of any great musician in not the quantity of notes he or she plays but the quality. In the case of Kickland, he can take the simplest of rhythm-guitar figures and make it sound like a magnum opus once he adds the vocals to it.

Next is the instrumental track One For The Road. Starting off with Ryan's skittering, Indian-influenced guitar-figures, this is a track where Patrick Ondrozeck's keyboard playing really comes to the fore. The best keyboardist in Rock, Patrick's dark and sonorous organ tapestries provide the ideal ground for Ryan's guitar-rhythms to gambol. A tune that would go toe-to-toe with the early instrumental compositions of Pink Floyd, it would be the perfect soundtrack for a hippie van barreling down an old country road on a warm summer night en route to Bonnaroo.

In the song Earth, one sees again the difference between a good musician and a true artist. With just a simple arpeggiated guitar-figure, an incisively placed vocal-hook, and light sprinkling of electric piano on the part of Patrick Ondrozeck, Ryan is able to create a masterpiece.

Then there is, perhaps, my favorite track The Squire's Red Fire. A song about a man with great curative powers, the brume of Patrick's organ swirls around everywhere to create a deliciously eldritch atmosphere. To put it another way, if this song were part of a film-score to a Hammer Horror motion-picture, it would make the soundtrack a very sought-after album.

Next comes another instrumental Zulu. A definite track for headphone listeners, it is easy to lose oneself in its atmosphere of meditative urgency.

A fully-realized player, in Siddhartha Gautama Ryan shows there is more to his guitar-playing than just strumming and solos. A fingerstyle guitar-instrumental, his playing shows a delicate intricacy reminiscent of a John Fahey or Jorma Kaukonen's acoustic guitar-work.

Like his musical hero Syd Barrett, Ryan has a penchant for taking childlike emotions and imagery and crafting it into a psychedelic gem, which he does with great aplomb in It's A Bowievel. With its trippy, bouncy guitar-track and woodblock keeping time, it is the kind of song one would hear on the soundtrack to H.R. Puffenstuff or some other 70s psychedelic show a child would have watched back then on Saturday morning.

The final track Flying Mad Music Machine makes for a lovely synopsis to this album. His guitar-signal drenched in the syrupy goodness of the Electro Harmonix Small Stone Phaser, the song reminds one, ironically, how little Ryan needs by way of effects or other equipment to craft classic songs.

All in all, I would characterize 3D Collapsing Star as a dark record, but it is not dark the way or gory horror-film is dark or a documentary about John Wayne Gacy is dark. Rather, it is dark the way a warm and clear summer night is dark: vast and fathomless, yet peaceful, inviting, and womb-like.

In sum, 3D Collapsing Star is an album that shows everything that was right about the 2000s music-scene. What a shame it never reached a wider audience.

An Example Of Kickland's Excellent Songwriting 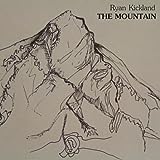