Review of Roald Dahl's 'Matilda the Musical' at the Cambridge Theatre

On a cold and damp winters morning in January 2015, my wife, kids and myself were lucky to be taken to see 'Matilda the Musical' at the Cambridge Theatre in the West End of London by my parents; a musical production based on one of the many books written by Roald Dahl.

After paying a disgraceful off-peak fee of £12 per adult for a tube ticket (and then finding that the Central Line wasn't running a complete service) we finally made our way to the theatre after a spot of lunch and took our seats in row F of the stalls. I was lucky to be on an end seat in the centre of the stalls and, thanks to a number of small children sitting in front of me, had a perfect centre view of the stage.

The scenery which surrounded the stage was fantastic. Hundreds of wooden blocks dotted around the stage and auditorium spelt out various words in different fonts, providing pre-show entertainment for the kids as they tried to spot as many words as possible. In the centre of the stage, seven different coloured blocks suspended from the ceiling spelt 'MATILDA'. From the wings of the stage bookshelves protruded (later to become part of the library scene) and the stage floor was a mishmash of different wooden blocks, which would later morph into various scenes including a bathroom, classroom and parapets for the actors.

The show commenced promptly at 3pm and from that moment the audience was hit we a mighty mix of music and vocals that instantly demanding everyone's attention. Every child I could see was mesmerised as we were introduced to Matilda's family, starting with her conceited and narcissistic mother 'Mrs Wormwood' (played by Lucy Jane Adcock) who we quickly discover is pregnant (with Matilda) and which most adults quickly realised was most likely to be the illegitimate child of her camp and vain ballroom dance partner, 'Swing' (played by Fabian Aloise).

From here, we were swiftly introduced to Mr Wormwood (played by James Clyde). Instantly the superb casting of this musical shined through as we became to loathe this character whilst feeling slight sympathy for is idiotic views on education; in particular reading.

Clyde was truly superb. He had mastered the art of playing a slimy, conceited and untrustworthy car salesman with perfection and really projected the true stereotype that the role required.

The introduction of Miss Honey

Fast-forward time 5 years and we are drawn into the family circle of a son who is doted on by his family (yet can barely speak a single word caused by his incessant television viewing) and parents who clearly hate their daughter, Matilda. Mr Wormwood is so disappointed that Matilda was born a girl that he constantly refers to her as a boy (along with many other derogatory slurs) and shows utter contempt to her.

As time continues and Matilda goes to school she is quickly recognised by her teacher - Jenny Honey (played by Haley Flaherty) - as the bright and uber-intelligent girl she has taught herself to become from secretly reading books from the library. Flaherty will later play a very emotional scene where she sings beautifully and with such emotion than many in the audience were left quietly weeping. Even this 30-something man who rarely shows emotion had a tear in his eye.

I contacted Haley via Twitter just after we saw the show to congratulate her on such a genuine and emotional performance. It was great to receive of response very shortly afterwards, another sign that stage actors are so much more on a level than some of the ridiculously overrated and overpaid actors we see on screens:

@BluesF1Brother thank you so much for your kind words. It always means a lot to hear how much people have enjoyed the show x

Queue Miss Trunchbull. This menacing character, played by Craige Els, instantly struck fear into the auditorium. The snarling, ferocious woman was bought to life by Els who dominated the stage in such a way that it would be impossible to imagine anyone else playing the role. The usually skinny man had be transformed by costume and make-up into a giant ball of anger and dominance who even had me concerned as he snarled past be through the centre of the auditorium. My 7-year-old daughter was clearly a little scared despite saying to the contrary!

Throughout the show, Els commanded the stage in every scene and we agreed after the show that he was clearly the best of what was and already excellent cast. Els is extremely witty, as the video interview below shows, but in Matilda he replaces his whit for dark sarcasm which is regularly booms at other characters in the most convincing way.

Matilda was played by the little known Tasha Chapple. Trained at Playbox in Warwick, this musical is Tasha’s professional stage début. The 10-year-old girl was nothing by perfect for this role, as were all of the child actors on stage.

Yes, I know that Tasha Chapple isn't the first actor to play Matilda and I doubt that she will be the last given that this production have longevity. I can therefore only comment on the young lady that I saw on stage. Ms Chapple was supreme and displayed acting skills well above her 10 years of life. I've seen children act in numerous productions, including Charlie and the Chocolate Factory, but there is something particularly special about her and she is definitely a stage star of the future.

I was, like many others I imagine, a little surprised that Tim Minchin had written the music for this musical. I had only ever seen Minchin on TV on a stand up comedy show and didn't find him particularly funny. At the end of last year I saw him give a rousing speech at the University of Western Australia which I found extremely inspiring and also very clever. Now, after hearing the music created by Minchin for Matilda, I think I'll be a life-long fan.

Tim Arther of Time Out magazine said of Tim Minchin:

"Minchin is a genius, pure and simple. He is to musical comedy what Charles Darwin was to evolution and what Einstein was to physics and moustaches. You’d be hard pushed to find a more sublimely talented comedian. Handsome, hysterical and divinely musically gifted – you can go off people, you know!”

Let's be clear - the music is unlikely to remain in the personal music collection like hits from Les Miserables or Phantom of the Opera - but does lend itself perfectly to the style of production, which also suited the often dark nature of the production. A plethora of songs with catchy hook lines that children and quickly remember but also song lyrics which make adults reflect in the way that they behave in their busy and bustling lives.

Expect to hear more of music writing from Minchin in the form of West End and film productions.

From a production point of view I found it strange that the band was playing music, live, from a desperate studio in the theatre. There was no orchestra pit. Instead, the music was piped from a sound-proof studio and the conductor beamed to the stage via a number of monitors dotted around the rear of the auditorium. This enabled the crew to take their cues. It was the first time I'd seen a production of this type where the band where in a separate room and in a way it makes sense - giving the sound engineer more ability to control the volume and overall mix of the music.

This production was absolutely superb and worth every single penny. The cast were cleverly picked, the music excellent, effects and sound well used and the entire experience came together to provide a perfect play which Roald Dahl would have been extremely proud of.

I highly recommend this show to anyone with children, but be aware of the minimum age of 6 years. There are some dark sections which may scare little ones.

How to find Cambridge Theatre 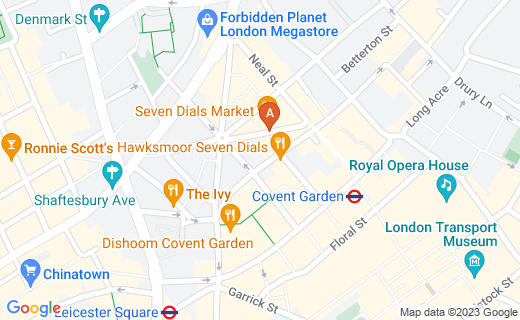