About "Bonded by Blood" and the Guitar Sound

There are heavy metal albums that have had an impact on the music scene and even years later, we think about them and analyze them. One such example is the debut album "Bonded by Blood" released by American thrash metal band Exodus in 1985. This is one of the few Exodus albums that I have heard along with Impact is Imminent and Tempo of the Damned. Bonded by Blood features the high pitched vocals of the late Paul Baloff (1960-2002). The guitar sound is very much in the style of the 1980’s because if you listen to the tone closely enough, you will hear the sound which is not developed enough and it has to do with the equipment that was available in those days. The guitar sound is similar to what we would hear on the album Alice in Hell in 1989.

Bonded by Blood is considered to be one of the most influential thrash metal albums of all time. It does not have the raw, staccato type riffing that we hear on Metallica’s debut album and this album is more straightforward in its approach.

The 1980's and the Role of Exodus in the Decade

The 1980’s might as well have been some sort of “golden age” for heavy metal especially in the United States. If there is one con about this album it is the lyrical content. I think listeners can see for themselves. Any album that has negative lyrical content will not receive a 100 percent rating no matter how great the quality of the music on the album is. There is actually a song Exodus that has the band’s name. The song might as well have been written about a professional assassin. Some people just enjoy inflicting pain on others.

Exodus and Their Category of Thrash Metal

There are different categories of thrash metal. Some of them are:

Rate the Album Bonded by Blood

Cast your vote for Exodus Bonded by Blood

How is the Rest of the Album Bonded By Blood?

Based on the popularity of Exodus, fans will probably say that they prefer the singing of Paul Baloff over Rob Dukes. The album starts with the title track Bonded by Blood. Can there ever be more strange lyrics that talk about having fun with metal music and then dealing with blood? That’s really unusual even for lyrical themes. And Then There Were None is a song that lyrically speaks of the end of the world. Will life end in sin as it started in sin? If mankind had not sinned against GOD we might as well be living in paradise now but as part of the human condition, there is both good and evil, life and death. Metal Command is a song about having fun listening to heavy metal and of course, the tradition of head banging. I’d like to make an interesting comment here: I’m sure that Mercyful Fate’s King Diamond would have thoroughly enjoyed the dark lyrical themes and the lead guitar work on this album! No Love has some fast riffs and it is a song about someone that loves to walk in the darkness and drink the blood of others. That’s what a vampire does. The fourth track which has a very graphic title sounds sort of black metal and rock style in the riffing.

How Is Bonded by Blood as An Album?

Overall, Bonded by Blood is a very good album with complex riffs and good solos but it is not as good as other studio albums made in the 1980’s such as Kill em All or Master of Puppets. The best songs in Bonded by Blood are most of them including the title track, Piranha, Deliver Us to Evil, and No Love.

Bonded by Blood May Be a Better Album In 2019

Looking back at this album in 2019, I hear that it still has that early good thrash metal sound that bands in this period were known for and that’s for the most part. I guess one exception would be Megadeth’s first three albums which had a bit of poor production. The song called Exodus has lead guitar that resembles Judas Priest in a sense but two songs into this album, I get the sense that it may be a better album than I previously thought. Bonded by Blood has that classic beginning of the early days of thrash metal and the riffing of that title track is memorable and the production is better than what we would have heard in terms of 1985 standards.

A Map of San Francisco the Birthplace of the Band Exodus 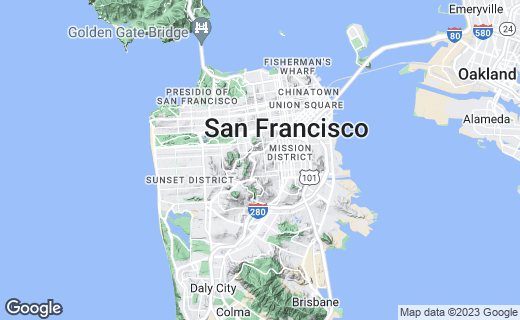