The Band Chainbreaker Is Not an Ordinary Thrash Metal Band

Linz Austria based thrash metal band Chainbreaker is the latest thrash metal band to be analyzed as part of this huge New Wave of Old School Thrash genre which could be considered a sub-genre of the main part of thrash. I know what some fans may be thinking. Thrash metal and Austria do not belong in the same sentence. That kind of sentiment may have been true years ago but with the way that thrash metal has been expanding and slowly being established in many parts of the world, there is a chance that Austria could become a decent thrash metal nation.

What we are reviewing is the album called Wasteland City but regardless of the title of this 2018 album, what we hear on this album is a well polished and created thrash metal work that is pretty melodic and contrary to what one of the songs says, these guys definitely do not screw it up. Instead, they provide a very entertaining brand of melodic thrash that is sure to please fans of bands such as Distillator or Kreator.

More Reasons to Listen to the Album Wasteland City

The album also has good choruses that a fan can sing along with, interesting bass lines as is the case in the song called Awakening of Evil. Thrash metal should not only be analyzed as being just another style of heavy metal but in times of hardship and struggles, music is a cathartic way to let our feelings and frustrations out or better yet, enjoying this kind of creativity. Thrash metal has gotten better in Europe going from a mainly speed focused form of thrash to becoming thrash metal of a more technical and melodic nature and there are also various vocal styles.

Wasteland City begins with an intro that most of you that listen to thrash metal would be familiar with. Okay, do you still not recognize it? It sounds like Metallica's Hit the Lights song but the beginning of the song does not completely sound like that one. The vocals do indeed sound like early Exodus. Does Paul Baloff come to mind? Merciless Eyes is a great introduction and entry to one of Austria's best new thrash metal bands. The same country that has mountains and gave birth to Arnold Schwarzenegger also is starting to develop a better metal scene. The melody in the first song is indicative of this evolution.

“Wasteland City” is once again Metallica influenced as the song lyrically talks about running through a city that has been turned into a wasteland. “Oldschool Attitude” sounds kind of like Judas Priest at first until the song speeds up and the screeches of the vocals come to greet our ears. The next song which has a very profane title in it starts with a bass line and then the bass guitar can be heard as the Metallica influence is shown again. The song lyrically is about people that want to party and drink and get “wasted” which is never a good idea to begin with. The song's shouting becomes a bit more intense as there is a call to “crash the party” and you can hear what beverage is being referred to here in this song. And then what seems like out of nowhere, an interesting melody accompanies the main riff.

The Rest of the Album Wasteland City Is Impressive As Well

“Breaking the Chains” has an interesting shouting style vocals and the song lyrically is about someone that has broken the chains of their captivity in life but they do not know where to go now. “Awakening of Evil” begins with another bass line as this song also slowly builds up into another modern day thrasher that is about what happens when there is evil unleashed in the world. The world then turns into a sinful place that becomes hard to escape from. From the beginning of time, human beings have sinned and they have suffered for their sins but it also is a fact that no human being is ever going to be perfect. “Mind Control” is a very fast song that lyrically tries to tell us to shut off the TV and take a look at what we put into our minds. Unfortunately for many of us, TV offers a very passive form of leisure that isn't always the best hobby for us as we are exposed to news which is negative and destructive. Can you lose your mind as the song says? You sure can lose your mind if you watch too much TV. “Blood for Blood” is a song that definitely does sound like something that German band Kreator would write. The song lyrically is about what someone does to try to get even because someone else has wronged him. The person described in this song is really looking for revenge. Through two full listens of this album Wasteland City, what you will here is thrash metal that is VERY well done and even if Paul Baloff were alive today, he would have given his stamp of approval if he had the chance to hear this brilliant work from Linz Austria's Chainbreaker!

A Map of Linz, Austria Where the Band Chainbreaker Was Formed 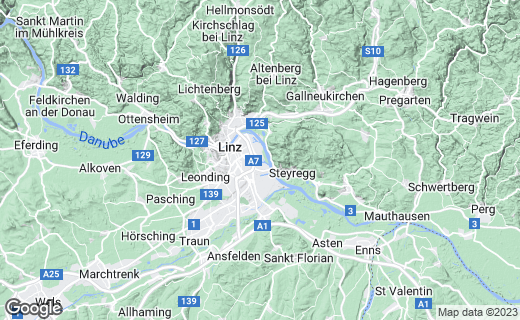