The Rock Songs List of one hit wonder music through the decades of the sixties and the seventies was probably the best collection of unique sounds that were ever put together representing this niche. Many of these hits bring back early grade school memories as well as memories of beach parties at Tobay beach on Long Island, NY. As a matter of fact there were so many one hit wonder hits in these two decades that I've limited my list to the most memorable.

During my grade school days I became known as a class clown, which frequently included playing the drums on my desk as part of my routine. Most of the time I played "Wipe Out", which was a sensational 1963 tune by the Safaris. "Mule Skinner Blues" by the Fenderman (1960) was another favorite of mine to perform during class because of it's yipping and yodelling.

In the early sixties there was a kid's program called the Sandy Becker show that was a favorite. Sandy Becker was an eccentric comedian and puppet master who dressed in weird outfits and had several alter egos, two of which were Norton Nork and Hambone. Norton Nork was a good-natured simpleton who was guided through his day by a voice-over (also played by Becker). Hambone was a loony disc jockey -- sort of based on Wolfman Jack and Cousin Brucie. When these crazy characters appeared they were usually accompanied by music. Two such pieces I recall from 1963 were "Surfin Bird" by the Trashmen and "Mr. Bass Man" by Johnny Cymbal.

The EasyBeats - "Friday On My Mind"

Soul Survivors - "Expressway to your Heart"

Some other influential early 60's one hit wonders were:

You've Got to Hide Your Love Away - the Silkie (1965) England's answer to Peter,Paul and Mary

Winchester Cathedral - the New Vaudeville Band (1966) A novelty song that had a megaphone/Rudy Valle (20's) quality to it.

They're Coming to Take Me Away, Ha-Ha - Napoleon XIV (1966) This song, which was a bizarre depiction of mental illness, was banned from the New York airwaves.

Some late sixties one hit wonders were:

Come On Down to My Boat - Every Mother's Son

We Ain't Got Nothin' Yet - Blues Magoos

Expressway to Your Heart - the Soul Survivors

Judy in Disguise (With Glasses) - John Fred & His Playboy band

Reach Out Of the Darkness - Friend and Lover

You Keep Me Hangin' On - Vanilla Fudge

Baby It's You - Smith

Smile A Little Smile For Me - Flying Machine

Something in the Air - Thunderclap Newman

The seventies were my partying years. Our group of cronies had many beach parties (keg parties) at Tobay beach and Jones Beach, NY, in addition to house parties that included favorite drinks like Southern Comfort, Rum & Coke and seven & seven. Some of the tunes loved by our group included one hit wonders like: Tighter, Tighter - Alive and Kicking (1970), Ride Captain Ride - Blues Image (1970), Love Grows (Where My Rosemary Goes) - Edison Lighthouse (1970), and Reflections of My Life - Marmalade (1970)

Other early 70's one hit wonders were:

In the Summertime - Mungo Jerry

Vehicle - the Ides of March

Are You Ready? - Pacific Gas & Electric

Put Your Hand in the Hand - Ocean

Hold Your Head Up - Argent

Oh, Babe, What Would You Say? - Hurricane Smith Similar to "Winchester Cathedral" from 1966 with the megaphone sound

Brandy (You're A Fine Girl) - Looking Glass Became a #1 hit

Dancing in the Moonlight - King Harvest

Seasons in the Sun - Terry Jacks

Some Late 70's one hit wonders were:

Fooled Around and Fell in Love - Elvin Bishop

Love Is In the Air - John Paul Young

Because The Night - Patti Smith Group

The one hit wonder Rock Songs List during the sixties and seventies will be remembered as the most diverse and popular collection of music representing this niche forever. 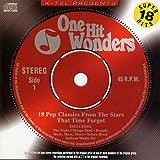