“Rowan and Martin’s Laugh-In” was an American pop culture phenomenon when broadcast on NBC-TV from 1968 to 1973. The series from “Beautiful Downtown Burbank” was the number one rated show for its first two seasons on the air. It made famous such catch phrases as “Sock it to me”, “You bet your sweet bippy”, and “Here come da judge”. “Laugh-In” vinyl record albums, trading cards, lunch pails, paper dolls, joke books,a comic strip, and a magazine were produced. It also launched the careers of Goldie Hawn and Lily Tomlin.

Now, to celebrate the 50th anniversary of the series (the pilot episode aired in 1967), Time Life and Proven Entertainment have released all six seasons of “Rowan & Martin’s Laugh-In” in one box set. The collection includes 140 episodes on 38 DVD’s, with a 39th disc consisting of bonus features. 89 of the episodes have never been released on home video or streaming before.

Dan Rowan and Dick Martin formed their comedy team in the 1950’s, including starring in a 1958 film, “Once Upon A Horse”. After headlining in Las Vegas, the pair hosted Dean Martin’s NBC summer replacement series in 1966.

The following year, the pilot for “Rowan and Martin’s Laugh-In” was broadcast, with the series starting in January 1968. It replaced “The Man From U.N.C.L.E.” in NBC’s Monday 8:00 P.M. time slot. "Laugh-In", with its mix of free wheeling humor, fast paced sketches, jokes, celebrity cameos, political satire, and musical numbers, took on and beat out its network competition in the top rated “Gunsmoke” and “The Lucy Show”. Rowan and Martin, dressed in their black tuxedos, proved to be affable hosts as well as appearing in the sketches, too.

The shows in the box set have been remastered from the original broadcast elements, so the picture quality is good. The episodes from the first four seasons open with the NBC peacock ID and the network’s announcer Mel Brandt intoning, “The following program is brought to you in living color on NBC”. The “Laugh-In” programs are complete and run approximately 51 to 52 minutes each. It would have been nice to have a few episodes with all of the original commercials intact, like the Johnny Carson Tonight Show Vault Series DVD’s, but that’s no big deal. The pilot episode found on the bonus disc does have an ad for Timex watches, featuring John Cameron Swayze, filmed in Sun Valley, Idaho. There’s also a brief spot for Ford’s 1971 lineup of new cars, including the Pinto, in a 10/5/70 season four show.

As Arte Johnson’s “Laugh-In” character Wolfgang the German soldier would say, the first “Rowan and Martin’s Laugh-In” episode on the Season One disc has a “Very interesting” segment in it. Along with guests Barbara Feldon, Flip Wilson, Buddy Hackett and others, the show introduced America to the falsetto singing, ukulele playing entertainer Tiny Tim. The looks from Dick Martin when Tim performs “A Tisket A Tasket” and “On The Good Ship Lollipop”are priceless. Tim was back in the third episode, singing “Tiptoe Through The Tulips”. Unlike the pilot episode, announcer Gary Owens does appear here in the first "Laugh-In" broadcast, as he did for the run of the show. He joined Rowan, Martin, and Ruth Buzzi as the only cast members seen on "Laugh-In" during all of its six seasons.

Season two's premiere episode, broadcast on September 16, 1968, includes the noted brief cameo by Richard Nixon (“Sock it to me?”) and guests Hugh Hefner, John Wayne, Jack Lemmon, Zsa Zsa Gabor, and Barbara Feldon again. With the attention given to Nixon’s segment, it’s interesting to see that he didn’t appear in any other parts of the program. You have to remember though that this was in the days of three broadcast networks, with no basic cable networks, Internet, Twitter, or YouTube. Presidential candidates might guest on talk shows or news related programming, but not on comedy variety shows. Such was the popularity of “Rowan and Martin’s Laugh-In”, that several people credit the show with Nixon gaining votes in the 1968 presidential election.

By the fourth season, much of the original cast had left the show. For the 100th episode, in season five, ex-cast members Johnson, Judy Carne, Henry Gibson, Jo Anne Worley, and Teresa Graves return for the broadcast milestone. Tiny Tim and John Wayne guest star. In one sketch, Wayne appears as his “True Grit” Rooster Cogburn character with Buzzi’s Gladys Ormphby. Carne also receives a gift of a light socket from Rowan and Martin, which leads to her being splashed with a bucket of water to reprise her Sock It To Me segments.

A bonus disc, exclusive to the box set, contains a 48 minute, 25th Anniversary Cast Reunion TV special; a 28 minute interview with “Rowan and Martin’s Laugh-In” Executive Producer and Creator George Schlatter; an interview with “Laugh-In” cast member Alan Sues; and a brief kinescope clip of Elizabeth Montgomery announcing and presenting the 1968 Emmy for Outstanding Musical or Variety Program to Schlatter, Rowan, and Martin. In the Schlatter interview, he mentions how he first saw Lily Tomlin perform in New York doing a barefoot tap dance act (she had taped the taps to her bare feet). He also tells how he hired Goldie Hawn after “Laugh-In” producer Carolyn Raskin saw her dancing in the chorus of Andy Griffith’s 1967 “Uptown-Downtown Show” TV special.

The box set includes a 32 page “Laugh-In Memories” book made up of jokes, archival, behind-the scenes photos, and notes from Schlatter.

In 2002, TV Guide named “Rowan and Martin’s Laugh-In” as one of the top 50 shows of all time. Thanks to Time-Life and Proven Entertainment, you’ll see the reasons why. While not ideal for binge watching, the program still provides lots of laughs decades later. 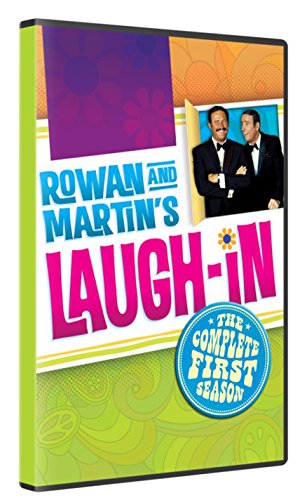