The Music of Scotland

When you think of Scotland the first thing that springs to mind is men running about with their kilts blowing in the wind, eating haggis and playing the bagpipes.

In reality the music of Scotland is more diverse and has a long history of folk rock and even pop music but the songs written for The children of Scotland are amongst the funniest and silliest in the world.

From a lullaby like Ally Bally Be to Donald Where's Yer Troosers, Scotland's children love to sing these traditional and modern songs every day and they always go down well when sung at a good old Scottish themed Party.

The song Coulters candy, or Ally Bally Be, can be traced as far back as 1845, it started off as an advertisement for a shop that sold aniseed flavored boiled sweets. the song originally one verse quickly grew popular with children all over Scotland and more verses were added over time.

The recipe for Coulters Candy has been lost to the annuls of history but boiled aniseed sweets are still available in Scotland today.

The song is still sung throughout Scotland today, as a lullabye to settle children and babies down for the night.

O' ye canny shove yer granny aff a bus is set to the tune of She'll be coming round the mountain when she comes but it has different connotations.

The question is why would anyone want to shove their granny off a bus in the first place?

Although you can't shove your mother's mother off a bus, in the song it seems to be alright if it is your fathers mother.

A fun song that children sing every day in Scotland that always gets a giggle.

The Jeely Piece Song, Originated in the 1960s on the outskirts of Glasgow with the building of high rise flats to cope with Glasgow's growing population. When children played in the streets outside of their old tenement buildings, instead of calling them in for something to eat the mothers would throw a sandwich to them from the window.

A jeely piece is the Scottish name for a jam or jelly sandwich and the song is about trying to throw a sandwich from a flat or apartment 30 stories up to a child playing in the street. 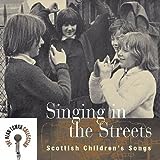 I have to be honest here and tell you that I have never heard this song before today, to me Skinny Malinky Long Legs was a rhyme rather than a song and was completely different from the song in this video.

Went to the pictures and couldnae find a seat

Red yo-yo is another song loved by the children of Scotland, about a girl called Annie who has taken her red yo-yo to school and lost it. she and everyone in the school are is looking everywhere to find it.

Please if you find wee Annie's red yo-yo with the wee yellow string hand it in, the poor wee lassie is broken hearted and her maw canny afford to buy her another one.

A catchy song loved by children all over Scotland.

Donald Wheres Your Troosers? is a song about a Scotsman who wears a kilt instead of trousers. This song was a UK number one hit single twice for Andy Stewart the first time in 1961 and again in 1989.

A favorite with Scotlands children and adults and was one of Scotlands most popular funny songs of all time.

Donald Wheres Your Troosers? is said to have been written in ten minutes by Andy Stewart when he was sitting on a toilet seat with his trousers round his ankles.

Billy Connoly is probably Scotland's most famous comedian of all time and his Welly Boot Song has become a modern Scottish classic.

Children all over Scotland still get a laugh from this song even if they don't know who Billy connoly is.

Scotland is a country that gets a lot of rain and this song sends a message about the importance of wearing your welly boots to keep your feet dry.

If it Wisnae Fur Yer Wellies

There's Been A Murder in the Chip Shop

There's Been A Murder in the Chip Shop is not a line from Taggart, Scotland's most famous detective, it is a rather gruesome song involving theft, the murder of a dog at the paws of another dog, false teeth, a wig and a wooden leg.

A short song that changes direction after the first verse and really doesn't make any sense at all but it is a popular song that children love to sing and have a laugh with.

There's Been A Murder in the Chip Shop

Sam the skull is about the wanderings and shenanigans of a cat wandering the streets of Glasgow.

Cat lovers and children love this song about Sam's adventures and the havoc he causes.

Sam the Skull is a lovable rouge who gets into all sorts of trouble and claims that the bars on the local prison are not to keep the prisoners in but they are there to keep him out.

A favorite amongst the children of Scotland I have often thought that Sam the skull would make a great childrens story.

Granny's In The Cellar

Granny's in the cellar by the Corries is another classic childrens song about Granny and her unhygenic cooking habits, it may gross you out a little but in the end Granny's cooking always tastes better than anyone else's.

Granny's In The Cellar