American composer Jim Steinman, once dubbed the Wagner of modern rock opera, is known for his sensual, dynamic music, darkly obsessive lyrics, and dramatic flair. He has also worked as an arranger, pianist, and stage performer. Although many may not be familiar with the man himself, the artist's collaborations with such greats as Meat Loaf, Bonnie Tyler, and Celine Dion has guaranteed a place for him in pop-culture history.

Early Work and Bat out of Hell

Jim Steinman was born November 1, 1947 in New York City, New York. His first serious composition (book, music, and lyrics) was written as part of an independent study course he took while as a student at Amherst College, Massachusetts in 1969. The rock musical, The Dream Engine, is set in a futuristic, dystopian world where the hero, Baal, rebels against societal constraints with the aid of his own lost boys, who call themselves The Tribe. In typical Romeo and Juliet fashion, Baal falls in love with the Girl, the daughter of his mortal enemies. Steinman played Baal in the original production, and so impressed Joseph Papp, founder of the New York Shakespeare Festival, that the show was signed for its New York debut at intermission. Unfortunately, because many objected to the script's explicit sexual references, the deal fell through.

In 1974, Steinman worked again with student director Barry Keating on a Vietnam-set musical, More than You Deserve. One the show's cast was Marvin Lee Aday, whose impressive girth earned him the nickname "Meat Loaf." Steinman was so awed with the singer's range and pop sensibility that the two began collaboration on an album that would become Bat out of Hell.

According to the duo's autobiography, Steinman and Meat Loaf spent the better part of three years trying to find a recording label. CBS executive Clive Davis rejected the idea, stating that Steinman was a horrible writer who knew nothing about rock music. It wasn't until October 1977 that the album was finally released by Cleveland International records. Much to the chagrin of many in the recording industry, the album was an instant success in Australia, the United Kingdom, and the United States. Steinman estimated that as of 1999 over 35 million copies had been sold. The biggest hit off the album was the rock-ballad, "Two out of Three Ain't Bad," which reached #11 on the billboard charts and the raunchy "Paradise by the Dashboard Light." After a brief hiatus due to throat problems, Meat Loaf again recorded songs composed by Steinman on the 1981 album, Dead Ringer. "Dead Ringer for Love", a duet with Cher, helped the album clench the #1 spot on the UK charts.

With the success of Bat of Hell and Dead Ringer, Steinman went on to produce raspy-voiced chanteuse Bonnie Tyler's 1983 album, Faster than the Speed of Night. In that same year, Steinman held the top two positions on the Billboard singles chart with "Making Love out of Nothing at All" by Air Supply and Tyler's powerful rendition of "Total Eclipse of the Heart." In 1984, the Footloose film soundtrack featured another successful Tyler-Steinman song, "Holding Out for a Hero," which recently appeared in Shrek II, performed by Jennifer Saunders.

In 1993, Meat Loaf and Steinman teamed again for Bat out of Hell II: Back into Hell. The album was hugely successful, reaching number one on album charts in various countries including the United States and the UK. The album had three top 40 singles, "Rock and Roll Dreams Come Through," "Objects in the Rear View Mirror (May appear Closer than the Are)," and the sexually-charged, "I'd Do Anything for Love (but I Won't Do That)," holding the top spot on pop single charts in 28 countries. In 1996, recording superstar Celine Dion's Falling into You included Steinman's haunting "It's All Coming Back to Me Now," which held the #2 spot on the charts after its debut and was awarded the BMI song of the year.

In 2003, MTV named Steinman the executive producer of their televised film version of Emily Bronte's gothic romance, Wuthering Heights. The composer has previously declared the novel to be one of his favorites, naming its ethereal lovers as the inspiration for "It's All Coming Back to Me Now." A limited-release six-track soundtrack CD was sold through MTV, and included "More," sung by Mike Vogel and Erika Christensen, "If It Ain't Broke (Break It), performed by Vogel, and "The Future Ain't What It Used To Be," sung by Christensen. That same year, the pop-classical duo, Opera Babes, released Beyond Imagination, with Steinman producing the track, "Vittoria!" adapted from Giuseppe Verdi's Aida.

Shortly after the release of "Total Eclipse of the Heart," Steinman was approached by British composer Andrew Lloyd Webber to write lyrics for The Phantom of the Opera, due to the "dark, obsessive" passion so often displayed in Steinman's work. Unfortunately, due to previous commitments to Bonnie Tyler, Steinman had to decline and the job went instead to Charles Hart. However, Steinman and Lloyd Webber later collaborated on the musical Whistle Down the Wind, first in December 1996 and then in a reworked, more successful 1998 West End production. In addition to the full-length 1998 cast album, a pop album was released featuring Bonnie Tyler, Meat Loaf, and UK boy-band, Boyzone. The single, "No Matter What," reached the top spot in the charts of many countries, while the title track also enjoyed some moderate success.

Steinman's own musical, Tanz der Vampire (Dance of the Vampires), opened in Vienna, Austria on October 4th, 1997. Based on Roman Polanski's 1967 horror-comedy, The Fearless Vampire Killers, the show was a smash hit, winning six International musical awards, at the International Musical Award Germany (IMAGE), in Dusseldorf. There have also been numerous productions of the show outside of Austria, including successful runs in Poland, Hungary, and Japan. The show includes multiple reworkings of Steinman's earlier compositions, like "Totale Finsternis" ("Total Eclipse of the Heart'), and "Die Unstillbare Gier" (uses the melody of "Objects in the Rear View Mirror").

Dance of the Vampires, based in part on Steinman's Austrian musical, opened on Broadway in 2002. Unlike its European counterpart however, the show included a large number of lowbrow and absurd jokes. Moreover, this Dance was presented as more of a comedy with only a few inserted songs. Despite the presence of stage star Michael Crawford (The Phantom of the Opera), the play was a critical and box-office failure, denounced by even Steinman himself. It closed on January 25, 2003 after only 61 previews and 56 regular performances, losing roughly $17 million.

To learn more about Steinman's latest projects, make sure to check out his blog. 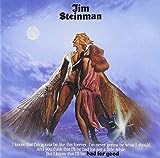