I love Shark Tank and get frustrated with how difficult it is to find out what's happened to my favorite pitches. Now I find the answers.

What Was Scrub Daddy?

Scrub Daddy is the "better way" when it comes to kitchen sponges. Created by Aaron Krause, it balances the best attributes of cheap green sponges with their scrubbing muscle while offering the versatility of a softer sponge. Add in the adorable smiley face design which allows you to grab or more easily clean cylindrical objects and you have yourself a kitchen mainstay.

Scrub Daddy is also known as one of the most successful pitches in Shark Tank history with multiple bids from Sharks, and would make a good presentation example for business leaders. Not too shabby for a new-ish product with a 4 month sales record, right?

As an owner of more than one Scrub Daddy product, I have to say, it makes washing dishes a bit more fun. What kitchen products can do that for you? 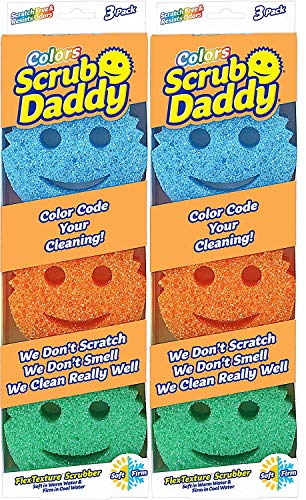 Scrub Daddy Deal or No Deal

Scrub Daddy received the following offers from the Sharks:

After duking it out with Kevin and Daymond, Lori emerged as the winner with a deal at $200k for 20% of the Scrub Daddy company.

That keeps the valuation that Aaron Krause wanted when he entered the Shark Tank with an ask of $100k for 10% of his company. Not a bad result when he had only sold $100k worth of Scrub Daddies up until that point.

Scrub Daddy is famously one of the biggest hits in the history of Shark Tank. As of 2017, the product had sold over 10 million units and grossed over $50 million in sales. Even at that point, Lori's gamble of $200k at 20% would be worth a staggering amount!

Later in 2017, Fortune wrote an article updating readers on Scrub Daddy and how it had reached $75 million in revenue which tells you the sales velocity they've been having with the main product and with sister products.

In the 9th season of Shark Tank, we're treated to an update and find out that Scrub Daddy has now racked up over $150 million in sales making it the biggest winner in Shark Tank history as of this writing.

Just as importantly, buyers seem to have an inexhaustible love for the product. The main listing on Amazon has over 2600 reviews with an average score of 4.6 - impressive! And as I've written earlier in this column, I can vouch for the quality of the product and haven't had any regrets since buying my own. Likewise, you'll see great reviews on other sites like Bed Bath & Beyond.

So if I had to characterize this 2019 Shark Tank update for Scrub Daddy, I'd have to say that Lori and Aaron Krause are the biggest known winners since the show's inception in 2009.

Scrub Daddy Beyond the Tank

So what did you think of the Scrub Daddy and how it's succeeded since the airing of the episode. Once Lori made the deal, I expected it to do very well because she can clearly tell the difference between a hero and a zero. And any time you have three Sharks jumping on a product and not wanting to partner up, it generally means good things for the product.

Do you have any thoughts that you want to share about Scrub Daddy? Have you heard anything through the grapevine about what's next for the company?