A Tribute to Lynsey de Paul

Lynsey de Paul was one of the mainstays of British pop music during the 1970s, both as a singer and as a composer. So, it is with sadness that we learned the news of her death on October 1, 2014 at the age of just 64.

Lynsey started her working life as an album sleeve designer which soon led to a change in career path as a songwriter.

She wrote several songs for British actor and singer Jack Wild in the early 1970s, but it was the success of her collaboration on The Fortunes' 1972 UK Top 10 hit Storm in a Teacup which really put her on the map.

As Co-Writer: The Fortunes: Storm in a Teacup

She was a renaissance woman. She could do everything: she could sing, she could compose, she was an immensely talented artist. 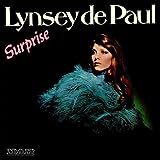 1972: The Start of Lynsey's Solo Success

Lynsey de Paul was not only a talented composer, but also a fine singer (and a beautiful woman, to boot).

Evidence of this came in 1972, when she combined both of these talents to score her first (and biggest) UK hit with the song Sugar Me - a Number 5 hit in the UK and a best seller across other parts of Europe.

Her follow-up, Getting A Drag, also entered the UK Top 20 although, sadly, it did not make as big an impact as her previous single.

Although she was small in stature, she was very big in positive personality. She was always so positive about everything.

Released in late 1974, Taste Me...Don't Waste Me was Lynsey de Paul's third album and contains eleven tracks - including the singles Ooh I Do and My Man and Me.

Also featured is her version of the Barry Blue hit, Dancin' (On a Saturday Night) (which she co-wrote with the singer).

Won't Somebody Dance With Me?

Despite a number of promotional television appearances across Europe and the UK, Lynsey's next single release, All Night, was not a chart success anywhere.

It would not be until later in 1973 that she would return to the UK hit parade with one of her best compositions, the plaintive ballad Won't Somebody Dance With Me?

It was a Top 20 success and also earned Ms. de Paul an Ivor Novello Award, the first ever to be given to a female composer.

She would win a second for the song No, Honestly, the theme tune to a sit-com of the same name. It also became her fourth UK Top 20 hit.

Award Winner: No Honestly From 1974

Barry Blue was something of a glam rock pop star during the 1970s and Lynsey de Paul helped co-write many of the songs he released as commercially successful singles.

He had five UK chart entries during 1973 and 1974, including School Love and Hot Shot.

However, his biggest song of the era was the UK Number 2 hit, Dancin' (On a Saturday Night) which Ms. de Paul helped compose.

It was her most successful composition (chartwise) either as a singer or songwriter. 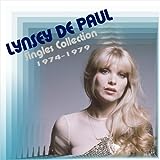 On to The 1977 Eurovision Song Contest

A couple of minor UK hits appeared in 1974 (Ooh I Do) and 1975 (My Man and Me), but her next voyage into the music charts of Europe came courtesy of the annual Eurovision Song Contest.

In 1977, she and composer Mike Moran joined forces and were selected as one of the acts to compete in the UK Eurovision national final with the song Rock Bottom.

Competing against eleven other songs, the duo's composition eventually won the ticket to represent the United Kingdom at that year's competition in London.

At the Final, once the voting had been completed, Rock Bottom defied its title and ranked as the runner-up behind the entry from France. However, in terms of sales across Europe, the UK song turned out to be the winner.

Which is your favourite Lynsey de Paul song?

As far as commercial success in her own recording career was concerned, the 1970s was the pinnacle of her output.

For most of the 1980s she disappeared from public view, but continued to work creatively in the world of music through her songwriting and record production.

She branched out into other fields of the arts, too. Acting and television presentation became a part of her repertoire and these strands of her career continued into the 21st century.

In addition to her Ivor Novello Awards from the 1970s, her later career also garnered some further accolades. She won a Royal Television Society award for a documentary on the subject of women's self defence, as well as a Gold Badge Award for her contribution to music.

That music was given a new lease of life when Cherry Red Records released two anthologies of her Seventies recordings (some previously unreleased) in March 2013.

She will be missed.

Your Comments Are Welcomed!