Slade - where are they now?

Slade are a classic English glam rock band that gained fame during the early 70s with a prolific series of hit singles and albums – they are one of the most successful British bands of the 70s. While most of their success was in Europe they had a couple of good years in the 80s in the US with a couple of songs reaching the top 50.

Their humble beginnings with a mediocre album Beginnings didn’t deter them and when Chas Chandler (the Animals’ bassist) took over management he transformed them and believed that they should write their own music.

It took several years of failure before they began to find their identity, they continued to perform live and gained a decent reputation as a live act. One song ‘Get Down and Get With It’ was a popular song that required audience participation and due to this it became a hit on the UK charts – most of Slade’s songs are ‘sing a long’ type songs and this early song helped them build a decent following, especially when they moved away from their ‘skin head’ look into a more popular glam rock ‘long haired’ look.

Slade began to record and perform rock anthems and during this period had their most commercial success with a string of hit records in the early 70s.

By 1974 Slade followed the trend of many bands and tried to create a movie – with a disappointing album they began to lose popularity and this ultimately led to their downfall. They had a brief resurgence in the Heavy Metal era but mostly were confined to the ‘doldrums’ with minor chart success.

Today, Slade II still perform and are moderately successful. They have stamped themselves on music history and have influenced many bands, with several of their songs being covered by ‘hair bands’ in the US in the 80s. 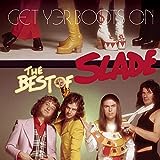 Get Yer Boots On The Best OF Slade
Buy Now

Slade have been associated with many genres throughout the years ranging from progressive rock, glam rock, heavy metal, hard rock and pop rock.

Slade probably had most success with their glam rock sounds during the 70s.

They toyed with acoustic rock but were mostly happy with a heavier sound that would not have been out of place during the 80s ‘hair band’ era.

Their attempts to regain fame included a stint with heavy metal, followed by a more pop rock; this became popular in the 80s in the US but was far away from the true glam rock sound of the band from the early seventies that produced the most hits for them

Slade through the years

Where are Slade Now?

Hill and Powell formed Slade II in 1993 (later shortened back to Slade) and while the band has transitioned over the years, Hill and Powell still form the core of Slade today.

Slade released a studio album in 1994 (Keep on Rockin') but this was not commercially successful. Compilation albums were released over the next decade or so to keep Slade’s name in the public eye, but mostly they were reduced to touring and playing their older successful songs.

Today Slade can still be found touring Europe and are appearing live at Koko in London. With two of the founding members still in the band they continue to belt out their hits in true glam rock style!