Some Of The Funniest Songs Are Found In Country Music

Humor Has Been Used Effectively For Decades In Crafting Country Songs...

Recently we were in downtown Las Vegas watching an unusual parade. A NASCAR race was about to be held here, and there was a parade riding down the strip made up of the haulers that move the race cars that were to be used in the race. Beautiful shiny semi trucks slowly made their way down the strip, all the while honking their horns and waving to the thrilled crowd.

We happened to be standing by the Riviera Hotel, on the North end of the strip. An older hotel, the Riviera has a lot of character, along with a great area to stand in front of the hotel with a magnificent view of the strip. It's a fantastic place for watching an event like a parade.

Music was being piped in through an overhead system, and one of the songs that came on was an old Roger Miller tune called "Chug-A-Lug." You might remember this song, some of the words are "chug-a-lug, chug-a-lug, makes you wanna holler heidi-ho, burns your tummy don'tcha know, chug-a-lug, chug-a-lug." He goes on to sing about going out behind a barn for his first taste of moonshine... and it brought back some fond memories of the outstanding Roger Miller songs that famously showcased his humorous writing talent.

Roger Miller has been one of my favorite songwriters for years. His songs are timeless, ring true, and are at times very funny! And with titles like "Chug-A-Lug," "Do Wacka Do," "Dang Me," "You Can't Roller Skate In A Buffalo Herd" and "Atta Boy Girl"... not many writers then or since have been able to compete with his exceptionally humorous and brilliant "bent" on songwriting. Roger had a brilliantly sharp wit and was able to use words in ways that crafted great humor, without relying too much on cliché.

Some Of Country Music's Recent Offerings...

Even today, humor is found throughout country music. Laughter is good and healthy, and one of the most fun parts of life. After all, "If we can't make fun of ourselves"... that's how the saying goes!

One of the funniest recent songs is the song "Red Solo Cup" by Toby Keith. Filled with obvious humor with a bit of innuendo and just plain silliness thrown in for good measure, this is one song that sticks in your head when you hear it!

We were at a concert last Friday night, and the people behind us were talking about that song and one of them said how the song was "stuck in their head" and they couldn't get it out! That's one of the hallmarks of a great country song, even if it is a silly one!

With references to using a red solo cup to drink at a party, and nothing else will do and a line like "you sir do not have a pair of vegetables if you prefer drinking from glass." A song like this might very well bring back memories for many people of parties from their college days, where the usual cup of choice was a RED solo cup.

"And admiring how sharply my first name is written on you"... isn't that almost always done at a keg party featuring RED solo cups? Proceed to party!

Another song on the radio lately that I found to be hilarious is the song by Billy Currington "Like My Dog." Very clever references to the ways that a dog acts around its owner, and wishing that his woman would act more "Like My Dog" is the premise of this song. With lyrics like "he never looks at me like he might hate me" and "want you to love me like my dog does baby, when I come home want you to just go crazy"... with those kinds of lyrics how can this song NOT be as lovable as ones dog?

Where else will you hear lyrics like "He always thinks pull my finger's funny" and "when I leave the seat up he don't think that's rude"? Nowhere else that I can think of, except in a great FUNNY country song! I would think that writing humorous songs would be the most difficult kind to write, but truly great songwriters have a knack for making it look easy.

I'm not even going to pretend to know which artists sang these songs or who wrote them, but, some of them I can actually remember from listening to my Grandma's radio as a kid! AND, these humorous Country song titles have got to be some of the LONGEST song titles around!

And the award for the song title that really makes you THINK is this little ditty:

The award for the LONGEST title of a country song has to be this one:

And yes, these really ARE song titles, truth can be stranger than fiction! You can't make this stuff up... oh wait, yes you can! 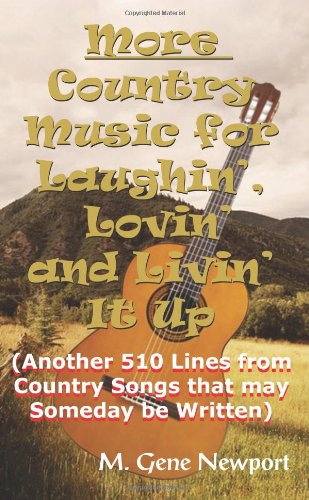 More Country Music for Laughin', Lovin' and Livin' It Up: (Another 510 Lines from Country Songs that may Someday be Written)
Buy Now