Synopsis: A desk-bound CIA analyst volunteers to go undercover to infiltrate the world of a deadly arms dealer, and prevent diabolical global disaster.

MPAA Rating: Rated R for language throughout, violence, and some sexual content including brief graphic nudity 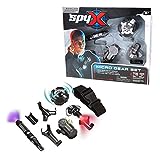 - Paul Feig does a tremendous job directing and writing this feature

- Melissa McCarthy and Rose Byrne were hilarious together onscreen, as every scene they were in together were some of the parts of the film.

-Jason Statham was surprisingly funny in this film.

- Movie flowed at a decent pace

- All the male characters are reduced to generic stereotypes, but it's for comedic effect, so it's forgivable.

Like "Neighbors" from last year, "Spy" doesn't seem like much when purely judging it from it's trailers. In fact, the trailers almost suggest that it's going to be one of those over the top silly comedies in ilk of something like "21 Jump Street", with a few added d**k jokes thrown in there for good measure. However, it's surprisingly deeper than that.

"Spy" follows a young woman named Susan Cooper (Melissa McCarthy), who happens to be working as an analyst for the CIA. When her long time crush gets allegedly killed in the line of duty, this inspires her to volunteer to go undercover for them before Rayna Boyanov (Rose Byrne) can sell a dangerous bomb to the highest bidder. Cue in various James Bond esque references and jokes throughout the film, along with some slapstick comedy, and you'd think that would be enough for most Hollywood filmmakers to run with.

However, "Spy" seems too smart for that. Sure, Susan's story arc about being this shy wallflower that eventually finds the confidence she needs to live up to her potential is rather predictable to say the least. However, it's how it's set up that makes it interesting, and her relationship with her antagonist, Rayna Boyanov.

As we're initially lead to believe, Rayna happens to be the daughter of a dangerous arms dealer, whose father was killed by Susan's crush, Bradley Fine (Jude Law), and she allegedly kills Bradley a bit later on. Now, you'd think with a set up like that "Spy" would be a pretty simple revenge story, where Rayna would probably play out the typical cartoon villain, who gets her comeuppance at the end.

Susan would still have the same predictable generic story arc, and everyone wins in the end right? Close, but no cigar. Unlike most comedies that tend to stick to a very basic formula in terms of it's writing, "Spy" dares to be different because you can never quite predict where the story is going to go next. Sure, you know that most of the villains will get their comeuppance at the end, and Susan will most likely turn out to be the hero. However, it's how it gets from point A to point B that really surprises you. Every time you think you have this movie figured out, it pulls a 180 on you to do something else. And for the most part, it works rather well because it constantly keeps you guessing throughout the movie.

Heck, the relationship between Rayna and Susan isn't quite as cut and dry as you think it would be. Based on the premise of the story alone, you'd think that the rivalry between them would be a fairly simple good vs evil shtick, but it's not. If anything, their relationship throughout the film is a bit more complicated than that. In fact, you could say they end up with a lot of mutual respect for one another at the end. It's quite interesting to watch, as their interactions were probably the highlight of the film. Like his classic comedy, "Bridesmaids", Paul Feig proves how great he is at creating strong female characters for the big screen.

He not only manages to make the two main female characters interestingly complex, but he even manages to make them funny as well. Instead of making Rose's character a straight up evil b***ch, he manages to make her into a delightfully funny and sympathetic character, who happens to be the villain. And even though Susan's personal story arc is predictable, you still can't help but relate to her on a lot of different levels. Seriously, how many of us have ever had moments in our lives where we loved someone that was oblivious to our obvious affections for them? How many of us ever had the opportunity to succeed at life, but we never got the confidence to live up to our true potential? What's interesting is that even though some of these concepts have been explored in various other films before, it's interesting how Paul is able to take those same concepts, and somehow make them feel fresh and nuanced. It's quite a treat to watch, as the trailers hardly do "Spy" any real justice.

However, this does bring me to my next point. Although Paul Feig does a tremendous job both writing and directing this feature, all the male characters seem to be reduced to being common caricatures of various stereotypes that we've seen in female lead movies in the past. You have the typical crush who's oblivious to Susan's affections, even though a complete moron could tell she had a thing for him. You have another male character that plays the sexist pig that only thinks about sex, and he's constantly trying to feel up our main protagonist throughout the film. Of course, let's not forget about the over the top macho idiot played by Jason Statham, who seems to be playing a caricature of the same character he played in "Furious 7" earlier this year.

Not saying it's a bad thing, as you can tell Paul did that deliberately. However, it's worth pointing out.

Overall, "Spy' was quite an enjoyable feature. The comedic timing throughout the film was spot on. Melissa and Rose were hysterically funny every time they were on screen together. And don't even get me started on Miranda Hart, as she almost steals the entire movie with her comedic performance.

As for Jason Statham, I still think he's a mediocre actor because he plays the same damn character in almost every goddamn film he stars in, but I have to admit he was rather funny in this one. In fact, he was arguably one of the funniest characters in this film, as I personally wouldn't mind seeing him in more comedic roles in the future.

All I can tell my readers is don't be fooled by the trailers for "Spy." Yes, I know it may seem like a fairly generic comedy based on the trailers, but it's surprisingly wittier than you might think. Definitely worth checking out in theaters if you haven't already.