When we returned from vacation last week the first two episodes of this three part mini-series had already aired.

Each episode is an hour long and commercial break free as it is a BBC1 series.

Was it worth watching? Absolutely though it was tough viewing at times.

The series is based on a book of the same name.

The book was written by John Preston and it charts the real-life scandal of Liberal Party leader Jeremy Thorpe (played by Hugh Grant).

Thorpe was tried for conspiring to murder his former lover, Norman Scott (played by Ben Whishaw). He was found not guilty.

In October 1975 in the United Kingdom an hired gunman allegedly shot and killed a dog that was with a man called Norman Scott, also known as Norman Josiffe.

Scott said the gunman was an assassin hired by Jeremy Thorpe to kill him and that the man had turned the gun on him after killing the dog but it had failed to fire.

Jeremy Thorpe was a senior British politician with links to many establishment figures. He was leader of the Liberal Party at the time and a married man.

Thorpe’s father was a Conservative M.P. and Jeremy was educated at Eton a public school were so many male members of the establishment and future Tory M.Ps were and still are educated.

Thorpe however decided to join the Liberal Party.

Mr Scott claimed that Thorpe wanted to silence him following homosexual relations between the two men in the 1960s.

England was a very different place in so many ways back then.

In England homosexual relations between two men was still a criminal offence.

Thorpe was part of the establishment and a pillar of society whereas Scott was allegedly flaky.

The events resulted in a criminal case but Thorpe and his co-accused were found not guilty.

He has risen the crest of a popularity wave. Jeremy Thorpe and Nigel Farage a recent political figure have many similarities. Larger than life characters who were charismatic and appealing to ordinary voters.

But if the scandal was true Thorpe was also a devious and complicated man who used people.

Background to this mini-series

A Very British Scandal explores the scandal from the beginning including how the two men met, their relationship, their personal lives and their careers.

Norman Scott is still alive but Jeremy Thorpe died in 2014 aged 85, nine months after his second wife passed away.

His first wife Caroline Allpass died when her car swerved off the road back in 1968.. The couple had one son, Rupert.

Caroline was killed just 10 days after the 1970 General Election, after only two years of marriage.

She was driving from Devon to London in a green Ford Anglia packed with all the family’s luggage when she suddenly veered from one lane into another. The car hit a 13-ton lorry before colliding with another car and flying twelve feet in the air. By the time she arrived at hospital she had died of a ruptured spleen.

Stein was the divorced wife of the Queen’s first cousin, George Lascelles, the 7th Earl of Harewood. The marriage was entrenched in the establishment of the day.

Marion and Jeremy were married until March 2014 when she died Aged 87.Jeremy Thorpe succeeded her by just nine months dying in December 2014.

Police thought the alleged assassin was dead but he is not

Why drag this scandal up again more than 40 years after it unfolded?

Certainly an homosexual affair these days would not cause a political scandal.

But it was a different time and Norman Scott was only aged 19 when he and Thorpe were sexually active with each other.

Thorpe faced a trial at the Old Bailey on charges of conspiracy and incitement to murder but was cleared.

Scott however and others do not believe justice was served.

Police had recently told Scott that the alleged assassin was now dead but he is not. However Gwent police will not reopen an investigation related to the Thorpe scandal even after the force wrongly assumed the main suspect was dead.

This documentary dates back to 1979 but was never aired.

In fact Mangold had been ordered to destroy the footage but he had kept a copy and this week it was aired on BBC4.

This documentary highlighted the uncanny resemblance between Hugh Grant playing Thorpe and Jeremy Thorpe himself. The performance is a credit to Grant and one of his best.

Watching the documentary it was easy to accept it all as fact. However legally it appears to be a closed case.

But for so many people of my generation Jeremy Thorpe will always be remembered for his sexuality, his affair and the alleged attempted murder of his male lover.

Is the mini-series worth watching? Absolutely

The plot is gripping and the acting excellent.

It is worth watching even if the Thorpe scandal is new to you.

If you know even just a little of events surrounding this affair you will find the series gripping viewing.

And to think it is not just a fictional drama.

5 stars for A very English Scandal 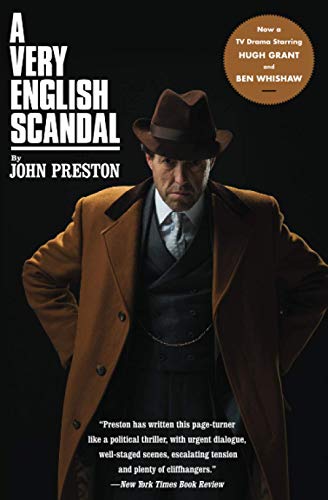 A Very English Scandal: Sex, Lies and a Murder Plot at the Heart of Establishment
Buy Now