The Beatles: Four Reasons to Wonder How They Changed Our Lives Forever

I love food and I love to cook, but sometimes, the first love takes over my second love. But not in this case.

The names, Fab Four, The Beatles, Must Ask

who were they really? Or what were they? Even the most-dedicated follower of John, Paul, George, and Ringo have faced these two questions before and after their time as a rock band. Me? I never called them a rock band because their music evolved from Club Rock when they began their Magical Musical Tour (no pun intended) to four sincerely-talented writers of songs, but lyrics. These four guys from Liverpool did not have to work that hard to make a dent in the Music World, in fact, they WERE the reasons for that dent that is still visible.

Below, I have placed the first-to-the-last work, the White Album, and the Let It Be albums, because they are to be cherished not only as four friends (so-called. Reasons I choose to not elaborate because you know why) in their beginning, and just four guys who were really going through the motions of existing long enough to fulfill their contractual obligations, but they were, take it or leave it, the Beatles.

Let It Be was the last work the Beatles recorded and performed (on rooftop, in London) to the awe of their friends on the sidewalk and the Bobbies’ sharp scolding. But it worked. And well. So did the Beatles journey and end like it started: with a loud cheering of, yeah, yeah, yeah. May we all strive to remember “that” special, early time when they entered Shae Stadium, Feb. 7, 1964, in New York—from their beginning in 1962 until 1970, what full life-changing music they made. 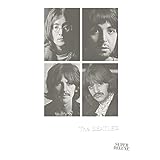 The Beatles (White Album / Super Deluxe)
The Beatles "White Album" was near the end of their recording, touring, and ultimately, their careers so to speak. The four were extremely-wealthy, popular, and were in need of nothing. Not even them having to remind us who they were.
Buy Now

Looking at The "White Album"

The Beatles, also known as "The White Album", is the ninth studio album by the English rock band the Beatles, released on 22 November 1968. A double album, its plain white sleeve has no graphics or text other than the band's name embossed,which was intended as a direct contrast to the vivid cover artwork of the band's previous LP Sgt. Pepper's Lonely Hearts Club Band. Although no singles were issued from The Beatlesi n Britain and the United States, the songs "Hey Jude" and "Revolution" originated from the same recording sessions and were issued on a single in August 1968. The album's songs range in style from British Blues and ska to pastiches of Chuck Berry and Karlheinz Stockhausen.

Let It Be
"Let It Be" defined: sad, happy, complex, and mystical. But the Beatles' best although ti was their last recording. Sad is not the word. Tragic is.
Buy Now

alone by itself in contributing willfully, the Beatles' last recorded LP and what an LP it was. John Lennon complained (about their famous rooftop concert), "this has to be the worst concert I have heard in years," but his opinion was the only one. The Beatles' hordes of fans on the London sidewalks, and the Bobbies, did what they could to keep order. But "Let It Be" although their last, will always be with us.

Let it Be – By The Numbers