Doom Metal is never going to be included on a tracklist of party tunes or feelgood music.

More than likely to be the soundtrack at a funeral service, cremation or some other deathly occasion where the music suits the mood.

For that is what Doom Metal is all about. Either conveying or instilling a dark atmosphere of brooding and foreboding. Not recommended as an exclusive musical feast but perhaps useful as part of a carefully controlled sonic diet when themes of depression and anguish seem right for the occasion. After all, life is not all fun.

Here are some fine masters of the mirthless from Italy. A list of 12 bands that I would reckon are among the best that the country has to offer the Doom Metal scene.

Founded in 2005 in Rome they have a melodic sound reminiscent of bands such as Katatonia, the early sound of Anathema and most directly that of My Dying Bride

They have produced two albums to date with 'Days of Nothing' their debut in 2005 and then there was a long wait for their second album 'Oionos' which was not released until 2010.

With a melancholic sound they also produce an emotional depth evinced by the baritone vocals of Marco Benevento singing deep lyrics of despair and loss.

Formed in Bergamo in 1992 and originally with a Classic Rock style of music.

They broke up in 1998 and a new band called Sad Symphony was begun with a new Doom Metal sound. However the original name of Thunderstorm was brought back but the new musical style remained unchanged.

Comparisons have been made with other bands such as Candlemass and Iced Earth as they share that same style of slow-moving metal. With epic songs of lamentation and death such as 'Sad Symphony' and 'We Die as We Dream(Alone)' they typify the slow-moving heavy riff of Doom. But 'Death Rides the Highway' brings a faster driven pace as does 'The Mad Monk' which both strongly highlight the influence of Black Sabbath on the band.

Formed in Piacenza back in 1999 by 'Herr Morbid' otherwise known as Ferdinando Marchisio who is their guitarist and vocalist.

The first album by the band called 'Songs to Leave' surfaced three years later in 2002 and they have been fairly prolific ever since then with 5 albums in 10 years.

They purvey a bleak but deeply atmospheric style of music dealing with themes of depression and suicide. The music is wonderfully melodic but the vocals are full-on agonised screaming throughout providing that contrast which is emblematic of much of the Extreme Metal genre.

Best tunes to check out are 'Scars', 'Disheartenment', the tender instrumental 'Springtime Depression', 'Blood and Concrete' and the mammoth 'Alone' which clocks in at almost 12 minutes in length.

Founded in 1999 by Riccardo Conforti and Ivan Zara, the band Void of Silence hail from the Lazio area of Rome

Their music contains a driving industrial sound that can incorporate metal shrieks with religious style chanting and choral singing.

They have a dark experimental approach to making music that is very ambient and ominous in mood. With a truly momentous production sound their songs are expertly crafted and delivered. This includes keyboards and vocal harmonies to provide a lush cathedral sound to the metal which lies at the core of their songs.

Top tunes are 'Anger', 'Human Antithesis', 'Temple of Stagnation', 'CXVII', 'Prelude to the Death of Hope' and the gargantuan 'Opus III - Anthem for Doomed Youth.

This is the Anglicised name of the band led by Paolo Catena and one of six projects that he has been responsible over the years.

Coming from Ancona he has been a long standing exponent of Italian Doom since 1987 with a very prolific output of albums.

As you would expect considering all the bands he has led he has a creative and eclectic streak. With music crossing into Stoner, Psychedelic and Space Rock there is a lot of variety in his material to enjoy.

Best songs are 'Three Water', 'Voyage to Hell', 'I Remember a Black Mass', 'The End of a Love Conflict', 'Bloodwing' and 'Sand Glass'.

Hailing from the Lazio area of Rome, Doomraiser begun life in 2003 and currently have three albums on the record store shelves of Italy.

Described as 'Traditional Doom' as they are among the modern revival of older Doom bands such as Paradise Lost for example.

Their music has clean vocals and a retro sound reminiscent of the 1970s with especially the influence of the greatest exponents of the darkside of metal, namely Black Sabbath.

Stand out tracks are the ten minute epic 'Another Black Day Under the Dead Sun', 'Vanitas', 'The Age of Christ, 'Like a Ghost' and 'Mountains of Madness'.

This band were formed in Genoa in 1995 although their first self-titled album did not arrive until 2007.

Exponents of the Funeral Doom sub-category of the genre their image is heavily influenced by Occultism and religious themes.

The music is foreboding with a heavy use of keyboards including church-style organ sounds. On top of all that the deep vocals of Labes C. Necrothytus lending an even more sinister menace.

Best songs are 'Sepulchre of Misfortune', 'Hearse', Grimorium Verum' 'Crypt of Horror' and 'When the Ceremony Ends'.

This Romantic Doom band began life in Compobasso in Molise in 1999. They take their name from the opening line of William Shakespeare's sonnet 'XCVII'

Heavily influenced by Goth Metal as well as the image and style of that genre. They write intense and creative lyrics to accompany their music.

The romantic Goth elements to their music bring a softer appeal which includes the use of keyboards as well as acoustic guitar and even violins.

Beautiful female vocals are interspersed with growling male vocals the latter of which are actually the more dominant. Using stage names 'Dust' provides the male vocals whilst 'Tragedy' and 'Misery' perform the female vocals.

Songs to check out are 'A Flower that Sears in Silence', 'All the Seasons of Madness', 'Laying Together Again' and 'Bescreen'd'.

A very difficult band to define musically due to their variety of influences.

Ufomammut were begun in 1999 and describe themselves as a 'Psychedelic Sludge' band with a highly experimental outlook.

Therefore they may take exception to being included in the category of Doom Metal but certainly they will appeal to many fans of the genre. Also followers of bands like Hawkwind, Ministry and Ozric Tentacles may enjoy Ufomammut.

Their unusual name is a hybrid of UFO and the Italian word for 'mammoth' and perhaps sums up their unearthly and huge sound. Admitting to an influence by Pink Floyd they incorporate imaginative visuals during their live performances.

Another band in a similar vein to My Dying Bride and early Anathema with lengthy compositions of great grandeur and import.

They were formed in 1995 and come from Catania in Sicily. Since then they have released 5 albums.

Clean vocals and growling overlay a rich sound with a heavy use of keyboards for that epic feel.

Amongst the best of their output are the songs 'Rondo', 'The Light Inside', 'Visage' and 'Embrace'

Formed in the year 2000 in Foggia in Apulia, Doomenicus only recorded one full album.

That was 'Sacred' released in 2009 after which the band split-up although it was really a one-man show all along.

Doomenicus is the moniker of the brainchild of the band who was the vocalist and bassist. His work is inspired by fellow Italian Doom merchant Paul Chain as well as that of Saint Vitus and Candlemass.

Best songs are 'Light a Candle for my Soul', 'Sacred' and 'Remember November'.

Another band from Milan who were formed in 1993 but subsequently split in 2001 after three album releases.

The band were very much influenced by the Black Metal sound and Gothic but with enough mournful feel to be regarded as exponents of Doom Metal.

They were quite an original group with strange tunes and experimentation in their repertoire.

Best tracks are 'In the Days of Sombre', 'Into the Field of Screaming Souls', 'Verra il Tempo dei Morti', 'On These Nocturnal Wings' and 'Among Shadows'.

A short-lived phenomenon but nevertheless a highly influential band who inspired the 'Funeral-Doom' style of metal.

They were formed in Milan in 1993 and only produced one album 'Oneiricon - The White Hypnotic' in 1995 before breaking up soon after.

Their name comes from Arabic and translates as 'Head of the Kneeler' named after the star Alpha Herculis. After the split some members founded a new band called 'Canaan' but this time with a more melodic Goth style of music.

As for Ras Algethi with only one album to their name you can choose from any of the 8 tracks of their transcendental music. Stand out moments are 'Nudes Obscura', 'When Fire is Father' and 'In White Hypnotic'. There are also another 3 songs on their E.P 'Oblita Divinitas'.

Links to more Hubs on Italian Rock by Shinkicker 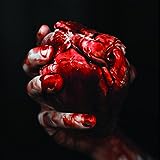 We Owe You Nothing
Buy Now