Synopsis: A family returns from a Grand Canyon vacation, haunted by an ancient supernatural entity they unknowingly awakened and engages them in a fight for their survival.

- Absolutely nothing was good about this movie other than that the fact that it was short, so at least, it wasn't two and a half hours of crap like "Batman v Superman: Dawn of Justice" was.

- The motivations behind some of the character's reactions made little to no sense.

- The acting seemed phoned in, with hardly any emotion and wooden performances

- The costumes for the demons look very cheap

- Subplots about Kevin Bacon's character having possible infidelity issues, and the daughter's bulimia issue, take up way too much of the film's time, and neither of these subplots add anything to the main story arc.

- The jump scares to setup mundane crap like the father finding out about his daughter's bulimia comes off as both corny and stupid.

- All the actors phoned in their performances. 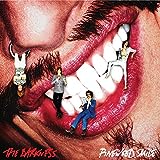 The only frightening thing about this movie is the wasted time you'll spend watching it...

Like spoof movies these days, the dramatic drop in quality for horror films hasn't gone unnoticed. Ever since movie studios started to figure out how to make these kind of films on a budget of a ham sandwich, they've been able to turn over a profit on mostly terrible to mediocre quality work. Sure, you might get a few attempts at a quality written horror story like "The Conjuring", or you might even get something that surprises you with it's unique twist on a tired old cliche setup like "The Boy."

Sadly, "The Darkness" isn't one of those rare diamonds in the rough. If anything, it's just a half ass put together horror film that's designed to get a quick buck based on it's subpar quality. No wonder there wasn't a lot of money spent advertising this crap because they probably knew this was going to suck from the beginning. What's it about you ask?

A family goes on vacation to the Grand Canyon, and their autistic preteen son falls into a hidden cave, where he steals a bunch of rocks with symbols on them. Apparently, the Native Americans that resided in those mountains ages ago were haunted by vicious demons representing various animals like the buffalo, the wolf, the coyote, the eagle and the snake.

Needless to say, the boy steals these rocks that were placed there specifically to seal these demons in their own dimension. And if you know how horror logic 101 works, then you can pretty much guess what happens from here. Demons start to haunt the family, but that's not all.

Not only does this family have to deal with demons, but their teenage daughter turns out to be bulimic because she's too concerned about her looks. Oh no! Plus, the husband is being pushed by his a**hole of a boss to cheat on his wife with the new intern, so he can imagine himself screwing the new intern. Let me get this straight. Basically, his boss, who happens to be married, is encouraging him to cheat on his wife, so he can imagine himself doing the same girl he wants him to f**k, yet he's too much of a chicken s**t coward to cheat on his own wife by sleeping with this girl himself? Wow, I don't know whether to hate this guy, or be amazed on how much of a royal douche bag he is. Maybe a bit both, but I digress.

What do these two subplots have to do with the demons wanting to drag their proverbial a**es back to hell or whatever? Absolutely nothing, which makes these subplots a huge waist of time, as they don't add anything to main story arc.

Plus, the dramatic tension that's used to setup the jump scares in most horror films is constantly used for almost every single petty thing that it starts to become comical. In most horror films, you get an awkward silence followed by a darkly lit atmosphere, as creepy music slowly starts to play right before the jump scare pops up. There's one scene in particular where this happens, were Kevin Bacon slowly sneaks into his daughter's room. The scene is built up like we're supposed to be expecting something horrible to happen, but instead he just sees his daughter throwing up because she's bulimic.

Don't get me wrong, I'm not saying bulimia isn't something to take seriously, but when you set it up like it's a jump scare moment in a horror story, then it just become anti climatic if anything else. It would be like setting up a slow build up towards a "jump scare" moment only reveal something ordinary like "Oh your girlfriend is breaking up with you!" Dun dun. Or you're fired from your job! Dun dun. You see how anti climatic that sounds?

Not to mention the fact that a lot of the characters' reactions are a bit odd considering the circumstances.

In one scene for instance, the demons somehow possess the neighbor's dog to attack the family's teenage daughter. Needless to say, this forces their neighbor to call the pound to put the dog down, which leads to Kevin Bacon's character acting like he wants to apologize to said neighbor, and the neighbor looks at him like he's pissed at him about it? Hold on here for a moment. Why the f**k is Kevin Bacon's character feeling guilty for this crap? It's the f**king dog that attacked his daughter! Why the f**k should the neighbor be pissed off at him for? If anything, the neighbor should be the one apologizing to him! Don't get me wrong, I love dogs too. In fact, I raised one for twenty freaking years of my life, but guess what? If my dog would've attacked someone else's child while he was a live, then you bet your a** I would've been very apologetic to the person he attacked.

The fact that Kevin Bacon's character even felt the need to want to feel guilty about it bothers me because it doesn't make any sense in context to the scene itself. Another thing that bothered me is how ungodly stupid these demons were.

No seriously, if you look up the word, "moron", in the dictionary, then you'd swear these group of a**hole demons would be in it. Without giving away too much of the ending, there's a moment where the family has a chance to get rid of the demons once and for all, but guess what? The demons just stand there and watch them do it. No, I'm not kidding either. When the family discovers how to get rid of them, the demons just stand there most of the freaking time, while they implement the procedure to get rid of them. Sure, one of them uses a telekinesis spell to push the kid back before he could implement the final step to get rid of them, but the kid gets back up to finish it anyway. And what do the demons do? They try to kill the father instead of stopping the kid from getting rid of them? Even though killing the father would do NOTHING to stop the kid from finishing the procedure?

Seriously, these are by far the stupidest freaking demons I've ever seen, but what do you expect? The cosmetic look of the demons are dull, as they look like guys wearing cheap costumes that you can find at a party store, so that should tell you how little the producers cared about this film.

And to top it all off, it features arguably the most pointless end credit scene since "Mother's Day" earlier this year. Hell, even the acting was phoned in, as you can tell most of them were just there to collect a paycheck.

It's almost like everyone involved in this project was just looking for a cheap payday, with little to no effort. I would recommend this movie if only to see how laughably bad it is (in the same vein i would recommend something like "Battleship" or "Barry Gordy's Last Dragon"), but it's not even laughably bad either. It's just sad because it feels more like a movie made by a bunch of amateur college students rather than something you'd see in theaters. .

Overall, this is probably the most phoned in horror movie that I've ever seen. Everyone from the writers, director, actors, and etc put in zero effort into this movie, so it's not even worth a look because if they're not even going to attempt to give us something good, then why should any of us care to go out of our way to see it?