Steven Escareno is an amateur film critic that writes about movies in his spare time.

Revenge....one stitch at a time

There's a line in "Plains, Trains and Automobiles" that Steve Martin once said. It goes something like this. "When you're telling a story, then have a point. It makes it so much more interesting for the listener." The same can be said of movies as well. If you're going to make a film (whether it's some artsy Oscar contender or some box office crap), then please have a freaking point to that damn film. Otherwise, you get nothing more than a mixed bag that you're not quite sure how to take it.

Granted, "The Dressmaker" does have it's moments of brilliance, and surprisingly insightful social commentary about how people tend to judge others in life, while showing how people tend to think only about themselves. However, it gets lost a bit in translation because the story seems a bit unfocused. At one point, it tries to be this elaborate love story. The next moment, it becomes a story about a woman seeking revenge against those that wronged her. And at other moments, it becomes a story about a woman confronting her past, and moving on in life. It tries to be all these things, but fails miserably at it.

As a result? The story feels a bit disjointed with it's tone, and the rest of the film is a complete mess. The story follows a young girl, by the name of Tilly, who allegedly killed a boy that bullied her ages ago. There was no proof, or eye witnesses to verify such a tragedy, but she was framed for the murder anyway; exiled out of town as something of a social outcast.

Although to be fair, the kid that died was kind of a dumbass. At the risk of sounding like a complete a**hole, or giving away a major plot point, I have to say this because it needs to be said. The kid had Tilly backed against the wall. He used his fingers to imitate horns on his head, and then tried to ram into her like a bull; head first without looking, as he expected her to just stand there. And to make matters interesting, Tilly moves out of the way at the last possible minute, and the boy cracks his head against a brick wall that was behind her and died. I'm sorry, but anyone who dies like this is a complete moron. But I digress.

Anyways, Tilly comes back years later; more stunning than before. Played by "Titanic" film star, Kate Winslet. Upon her return, she's met with mixed reactions. Some with faint scowls of hatred. Gossiping runs about her good name, and guys can't help but ogle her voluptuous beauty; particularly town heartthrob, Teddy (played by Thor's real life younger brother, Liam Hemsworth). Meanwhile, her mother barely remembers her at all, but she soon becomes the talk of the town again, when she starts to help out the girls with their dresses.

As it seems, she's become something of a seamstress, during her years away from town. In fact, she even manages to turn a dull wallflower into a classic beauty overnight. She quickly goes from being the devil that killed an innocent boy ages ago to suddenly becoming a small town sensation. Everyone loved what she could do for them.

In fact, Teddy even tries to sweep her off her feet, and suggests to Tilly the possibility of starting a family someday. Indeed, things are looking up for her, but to quote Murphy's law, "Anything that can go wrong will go wrong", and that's kind of what happens. I won't divulge too many spoilers, but I will say that "The Dressmaker" suffers from lack of focus, as I mentioned earlier. 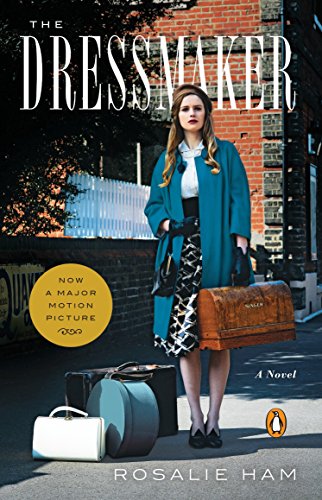 The Dressmaker: A Novel
Buy Now

At times, it shows some flashes of brilliance, as I loved some of the social commentary this film was laying down. After all, one of the biggest flaws we have as human beings is that we often tend to associate how we feel about a person personally, or what they do for us, to equate to how good of a person they are morally, or how good they are at their jobs. If someone is a hard worker, but you don't like them for whatever reason, then you're more than likely to think they're lazy no matter how hard they perform. Or if a person is lazy, but you like them as a person, then you're more than likely going to give them the benefit of the doubt. Is it fair? No, but it's life.

We never stop to see how they treat others, or if maybe the way they act around us is simply an act to get something for their own self interests. Sadly, most people in this world are selfish, and only care about themselves. Don't get me wrong. Not everyone is like this per se, as I'm sure there's plenty of unselfish people out there. In fact, I've been blessed to meet a few myself. However, the point is that most people in this world are usually only nice to each other because they want something from that person. This can range anywhere from favors to something as simple as feeling a sense of accomplishment.

At some points in this film, it hits on those themes nicely, but at other parts, it feels like it misses those themes entirely.

Having said all that, I'm not sure how to feel about this movie because it's not even sure what it wants to be. Is it a love story? Is it a revenge story? A film with a lot of deep social commentary about life? Is it a story about a woman confronting her past? Or a mixture of all of them?

To be completely honest, I'm not sure what the filmmaker's intent was behind this movie. And the resolution at the end, where she tries to get back at the town, feels anti climatic at best because of how rushed it was in the third act.

Overall, it's an interesting film if you're looking for something different to watch, but I wouldn't go out of my way to see it though.