The Eye of Sauron in the Lord of the Rings

A Popular Eye of Sauron Meme

Eyeball on a Stick!

By and large, the visuals of Peter Jackson's The Lord of the Rings films were impressive. Some of the greatest delights for Tolkien fans were in seeing places like The Shire, Moria and Minas Tirith brought before our eyes at full-scale.

However, the flaming eye suspended between the prongs (!) of the Dark Tower like a Jacob's ladder in Dr. Frankestein's lab was a bit of a head-scratcher.

Sauron's disembodied Eye creates rather an amusing mental image for this passage from Return of the King:

'One has come that I feared.'
'Not - the Dark Lord?' cried Pippin, forgetting his place in his terror.
Denethor laughed bitterly. 'Nay, not yet, Master Peregrin! He will not come save only to triumph over me when all is won.'

I'm not sure which scene I like better: the Eye of Sauron bobbing over the battlefield like a beach ball over a concert crowd, or it tethered to the Tower of Echthelion like a flaming Good Year Blimp.

On the film commentaries included with the DVDs, Peter Jackson himself expressed the problems his crew faced in dramatizing the disembodied Eye of Sauron.

Instead, Peter Jackson dwelt as much as he could on the Black Riders, on Saruman, on Gollum, magnifying their canonical villainies with additional scenes, inventing ugly orc commanders to serve as enemy figureheads, or even turning Lothórien's wardens and Faramir hostile in order to supply more immediate antagonists.

As someone no doubt informed Peter Jackson, he need not have struggled so much to avoid showing the "Red Eye" until he had to. In fact, Sauron was corporeal!

I Spy With My Little Eye... 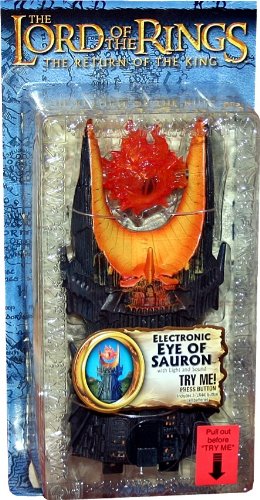 The Origin of the "Eye of Sauron" Mistake

It's understandable that Peter Jackson mistook the Eye of Sauron for a literal, disembodied eye. Tolkien chooses, like a good horror movie director, to show only glimpses of his villain, making him that much more terrifying:

But suddenly the Mirror went altogether dark, as dark as if a hole had opened in the world of sight, and Frodo looked into emptiness. In the black abyss there appeared a single Eye that slowly grew. until it filled nearly all the Mirror. So terrible was it that Frodo stood rooted, unable to cry out or to withdraw his gaze. The Eye was rimmed with fire, but was itself glazed, yellow as a cat's, watchful and intent, and the black slit of its pupil opened on a pit, a window into nothing. ("The Mirror of Galadriel," The Fellowship of the Ring)

Frodo's experience on Amon Hen, the Seat of Seeing, is similar:

Then at last his gaze was held: wall upon wall, battlement upon battlement, black, immeasurably strong, mountain of iron, gate of steel, tower of adamant, he saw it: Barad-dûr, Fortress of Sauron. All hope left him.

And suddenly he felt the Eye. There was an eye in the Dark Tower that did not sleep. He knew that it had become aware of his gaze. A fierce eager will was there. It leaped towards him; almost like a finger he felt it, searching for him. ("The Breaking of the Fellowship, FOTR)

Frodo senses Sauron's eye directly because in both cases, he is using a magical sight-enhancing device, and also, he bears a Ring of Power. Galadriel explains:

'As Ring-bearer and as one that has borne it on finger and seen that which is hidden, your sight is grown keener. You have perceived my thought more clearly than many that are accounted wise. You saw the Eye of him that holds the Seven and the Nine.' ("The Mirror of Galadriel, FOTR)

However, we should be careful of assuming a part is a whole. When Théoden tells Saruman, "You hold out your hand to me, and I perceive only a finger of the claw of Mordor," he does not mean it literally.

Tolkien, like many scholars of ancient literature, is extremely fond of metonymy, and uses it often in his writing (Mouth of Sauron, White Hand, even Sting).

Sources for This Article

Sauron's Body in the Third Age

Pippin sees Sauron with another magical viewing-device, a palantír, but lacking the power of the Ring, it sounds as if he is facing a corporeal figure, for surely he would otherwise have remarked on the flaming eye, rather than the fact that Sauron's voice was inaudible:

'Then he came. He did not speak so that I could hear words. He just looked, and I understood.' ("The Palantir, The Two Towers)

Gollum makes it quite clear that Sauron's presence was a physical one, recounting his torture at the Dark Lord's hands:

'That would be Minas Ithil that Isildur the son of Elendil built,' said Frodo. 'It was Isildur who cut off the finger of the Enemy.'
'Yes, He has only four on the Black Hand, but they are enough,' said Gollum shuddering. ("The Black Gate is Closed, TTT)

For any more information than that, we have to turn to Tolkien's responses to his fans' questions. In Letters #246, he describes Sauron in The Lord of the Rings thus:

"Sauron should be thought of as very terrible. The form that he took was that of a man of more than human stature, but not gigantic. In his earlier incarnation he was able to veil his power (as Gandalf did) and could appear as a commanding figure of great strength of body and supremely royal demeanor and countenance."

The reference to his "earlier incarnation" means Sauron before the Ring was cut from his hand, taking most of his power with it. Sauron is not a living, biological creature, but a Maia, a supernatural creature akin to an angel or pagan god, capable of assuming a humanoid form. He had lost his body once before, when he was trapped on the island of Númenor when it was destroyed:

"But Sauron was not of mortal flesh, and though he was robbed now of that shape in which he had wrought so great an evil, so that he could never again appear fair to the eyes of Men, yet his spirit arose out of the deep and passed as a shadow and a black wind over the sea, and came back to Middle-earth and Mordor that was his home. There he took up again his great Ring in Barad-dûr, and dwelt there, dark and silent, until he wrought himself a new guise, an image of malice and hatred made visible; and the Eye of Sauron the Terrible that few could endure." ("Akallabêth," The Silmarillion)

He lost his body and had to repeat the process after Isildur cut the Ring from Sauron's hand at the end of the Second Age:

"He forsook his body, and his spirit fled far away and hid in waste places, and he took no visible shape again for many long years." ("Of the Rings of Power and the Third Age," The Silmarillion)

From Tolkien's rough drafts of the Tale of Years, it appears to have taken Sauron, bereft of his Ring's power, about a thousand years to re-embody himself.

We actually have Tolkien's own portrait of Sauron's ultimate dissolution in

J.R.R. Tolkien: Artist and Illustrator, which includes his original cover art for The Return of the King depicting the moment when Frodo cast the Ring into the fire and Aragorn's army looked up:

"Black against the pall of cloud, there rose a huge shape of shadow, impenetrable, lightning-crowned, filling all the sky. Enormous it reared above the world, and stretched out towards them a vast threatening hand, terrible but impotent: for even as it leaned over them, a great wind took it." ("The Field of Cormallen," The Return of the King).

With the Ring into which he had put most of his power destroyed, Sauron no longer had the strength to pull himself back together. (And if you've read The Silmarillion, you may surmise that the "great wind" out of the west was a final, subtle, "Oh, no you don't" message from Manwë in the Undying Lands.)

Addendum: Sauron in The Hobbit

Sauron never actually appears in the book of The Hobbit, since when Tolkien wrote that, he only had a hazy idea that Gandalf was off fighting some "Necromancer" figure while the dwarves and hobbit were bumbling through Mirkwood.

However, Peter Jackson intends to dramatize Gandalf's unwritten adventures, and this time, it appears that Sauron will show up on two legs.