I am a poor wayfaring stranger

Burl Ives used this song as a sort of theme song. It seems fitting for many of the old wandering minstrels such as Ives, Woody Guthrie and Pete Seeger.

To folks my age and older, who predate the 1960’s, Burl Ives would have been the most recognizable name to come to when folk music was mentioned.

I feel fortunate to have attended what might have been his last concert. It was in Davenport, Iowa. We had reservations to attend another one coming up, but it was cancelled. Not too long after we heard he had died, which would have been in 1995.

As I recall the audience was held spellbound by this man performing by himself. Sitting on a stool singing and playing a guitar. His voice was still strong at that time.

“One of the inescapable mysteries of the folk boom of the 1960s has been how one of the undisputed parents of the revival, Burl Ives, managed to keep himself completely distant from his progeny.” Milt Okum in “Something to Sing About.”

I think Ives, more than anyone else, brought folk music to a popular audience in the 1940’s and 1950’s. It was ironic that he was not heard from in the 1960’s folk music revival. According to Wikipedia it was related to the politics of the entertainer blacklisting of the 1950’s. Ives was identified as having supposed communist ties. He told them he was not a member of the communist party but had attended meetings with Pete Seeger in order to keep in touch with working folks. He couldn’t tell them who was communist and who wasn’t. They knew who his friends were and they would have to ask them His cooperation ended his blacklisting but led to a rift between Ives and many other folk singers. Pete Seeger felt that Ives had betrayed them A few years before his death Ives and Seeger were reunited in a benefit concert.

Some felt that Ives, who had become a noted actor, was too busy with his acting career to keep up his singing career. Another theory is that many were envious of his success. I’m told that is sometimes a problem with musicians. Something, I believe happened to Bob Dylan when he made a lot of money. Some felt that he did not care for the left-wing elements of the movement. I believe Dylan also tried to keep some distance from the politics of the times.

Although I was a fan of Pete Seeger and had the opportunity to see him in several concerts, I am of a mixed mind to know if Seeger was brave of foolish when he defied the House Un-American Activities Committee. He, in effect, told them off, which I will get into more detail about when I write about him.

Burl Ives was more than a singer and an actor. He was a folklorist who collected songs, stories and sayings. and contributed to the legacy of American folk song by writing some of these things in books. Including: his autobiography entitled “ The Wayfaring Stranger ” in 1948. Other books include The Burl Ives Songbook (1953), Tales of America (1954).

According to Milt Okum, Ives started his career at the age of four when he sang fifteen verses of “Barbara Allen” for an audience. He went to Eastern Illinois Teachers College but left there in 1929 and went on the road a few years after Carl Sandberg and a few years before Woody Guthrie and Pete Seeger. The late 1920’s and early 1930’s were the beginning and exploration period for that generation of folksingers. It was an interesting period. One anecdote that always struck me was that Ives was thrown in jail in Utah for singing the song “The Foggy Dew .”

In the 1930s he went to New York and started his acting career but continued to record songs. Artistically Ives wavered a bit when he made some recordings in the Nashville style. However, he left a major contribution to the body of American folk music.

All in all he spent a life filled with song, stories, as an actor, and writer. He worked on stage, in film, radio and print. 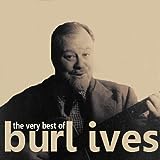