It's easy to dismiss a pedal because it's mass-manufactured, or because it was designed before circuits got really sophisticated, or simply because it's inexpensive and therefore ubiquitous. But before one completely pooh-poohs the Boss DS-1, it's important to actually give it a try.

As with all Boss pedals, there are aspects of the DS-1 that some guitarists will love, and others will hate. As often as not, when a debate about this pedal breaks out on an internet message board, the same characteristics that one player despises are the very same that another prizes!

On first glance, as with all Boss compact pedals, the DS-1 Distortion strikes you immediately as robust in terms of build quality. The standard Boss chassis seems like it could withstand a fall from a multi-story building, or being run over by a steamroller. The control layout is very simply laid out, and the plunger portion of the pedal that you step on to turn the effect on and off is big and quiet.

The orange color is kind of a funny aesthetic decision, but the pedal was designed in the late 1970s, so that kind of makes sense. Though the design of the pedal hasn't changed since it first rolled off conveyor belts, the parts used in modern Taiwanese models are allegedly inferior to those in the original Japanese models. But there are numerous modifications that can be made to this pedal due to its relatively simple circuit, and if you're not handy with a soldering iron, you can always purchase one with the modification already performed via a number of pedal builders' websites. More on this later, though.

Operating a distortion pedal has probably never been simpler than using a DS-1. Stepping on the large plunger that takes up the entire bottom 2/3 of the unit turns the pedal on or off, and an LED mounted above the control knobs confirms your action by either lighting up or going dark.

The "Tone" knob adjusts how bright or dark the effected signal sounds. Turn it to the left to cut treble frequencies and boost bass frequencies; turn it to the right to do the opposite.

The "Level" knob changes how loud the signal is when the pedal is turned on. Turn it to the left to make the effected signal quieter once you step on the pedal; turn it to the right to get a volume boost once you turn it on.

The "Dist" (Distortion) knob dials in the amount of gain that will be present in the effected signal. Turn this control to the left to get cleaner sounds; turning it to the right will produce more saturated, driven sounds when the pedal is activated.

The only real quirk of this pedal that may take some getting used to is adjusting the Level and Dist controls, because there's a lot of volume and gain on tap here. It's quite easy to set this pedal so that it's just too loud when you step on it, although that's another reason for this pedal's popularity--quiet verses played with a clean guitar tone that exploded into loud, gritty choruses powered by distortion were hallmarks of the grunge/alternative rock movement of the 1990s, for instance.

But spend a little time with this pedal, and you're bound to find sounds that work for you at levels you can control to your liking. The learning curve with this unit is definitely not steep, which is another quality that may explain its enduring popularity. 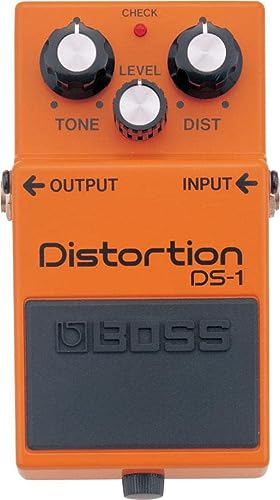 The DS-1 has a tone very much its own. There are folks out there who'll insist that it comes incredibly close to the sound of a cranked Marshall JCM-800, and while I'm sure that's something like what the people at Roland/Boss had in mind when they designed the pedal, I cannot personally attest to this alleged similarity.

However, I can say that in its stock configuration, it's not difficult to get the DS-1 to produce thick distressed tones that definitely up the ante for pure rock energy when the pedal is turned on. It's a sound so popular that it borders on the generic at this point, so it's easy to forget the simple joy that can be conjured just by plugging your guitar into this pedal, running from the pedal into your amplifier's input, and playing a few chords clean AND THEN STOMPING ON THIS PEDAL AND FEELING LIKE ALL HELL IS BREAKING LOOSE. I've owned other distortion pedals that arguably sound better, but none quite provide the chaotic, on-the-edge feeling that the DS-1 generates when it hits the front end of a tube amplifier.

This quality, however, can make it a tricky prospect in any situation other than live performance. For instance, while it's tempting to incorporate the DS-1 into your solo practice or writing sessions, the feel of this pedal isn't quite the same when neither it nor your amp are cranked. Bedroom volumes just produce a hollow-sounding, fizzy tone that isn't terribly useful.

Similarly, in a studio situation, the DS-1 can be a little tough to tame. If you're like just about every other user of this pedal ever, you'll find yourself wanting to take advantage of the volume boost as much as the distortion sound in your songwriting, building in places where you hit this pedal to create a dynamic shift toward "bigger, louder." You will likely have to set up a separate guitar track where you exclusively record parts that involve the DS-1 just so you can capture the sound correctly, because setting up a clean track that sounds good and then stepping on this pedal may just render your tone unusable.

Live performance, however, is where the DS-1 takes wing and joins the rank of the hallowed. Again, find a good setting that takes advantage of the headroom available via the Level knob and dial in a gloriously ragged sound via the Dist control, and slam the audience with wave after wave of molten guitar tones. The fact that it's so easy to adjust on the fly is another huge advantage--if you don't like how your tone sounds in a given environment, you've only got 3 knobs to worry about.

Having used this pedal with solid state, hybrid and tube amplifiers, I will unequivocally state that tubes produce the best and most usable tones when the DS-1 is involved. Solid state amplifiers and even hybrid amps, to some extent, aren't quite able to handle this pedal's more extreme edges, and it's not uncommon to hear a kind of fizziness in the treble that can't be dialed out without dulling the sound of the pedal completely. The pedal also sounds kind of flat and two-dimensional through solid state and hybrid amps, and you'll often hear this tone described as "bees in a can." It doesn't sound angry so much as annoyed.

But run into a tube amp, the DS-1 really does crank in an extremely pleasing way. Another great feature I've found is how well this pedal plays with other dirtboxes; stacking the Boss distortion alongside the Boss OD-2 Turbo Overdrive (with the Turbo switch on) produced a huge, super-saturated yet still controllable sound. I would encourage anyone who feels the DS-1 comes up short of their expectations to experiment with different combinations of pedals, too.

Players looking for a big, thrashy distortion sound probably won't find much competition for the DS-1 in its price range. Its fat, compressed tones are not useful in every context, and it's arguably less effective at its job when used at any setting short of full-tilt. However, it's so easy to use that you'll know pretty quickly if it works for you or not.

The Boss DS-1 Distortion is likely to find fans among players who operate primarily in the punk, metal, and alternative rock worlds, but crafty guitarists may yet find other uses for it. It's definitely something of a one-trick pony, however, and probably not the right pedal if you're seeking something that provides a diverse set of sounds inside the same box. Make no mistake--this orange box was built for rock!