Vox's big selling point with the ValveTronix series of amplifiers has been their use of a 12AX7 tube in the preamp section coupled with a solid state power amp (known as "hybrid" technology) in order to achieve tones similar to those of classic all-tube amps. While not exactly the same, any player who has ever spent significant time with both tube and solid state amplifiers will recognize that the AD50VT does reside somewhere between the two. The hybrid configuration definitely has a notable effect on the tone, rendering it warmer than that of a solid state amp (though not quite as warm as an all-tube configuration) and improving the feel of the amp's response.

The AD50VT is, at first glance, a strange mix of corny and classy. The chrome grill is, for me, the biggest cosmetic sticking point. Although the first AD series of amps modeled the sounds of classic amplifiers not known for producing high-gain sounds, it's clear from the shiny plate that sits in front of the speaker that Vox was trying to market these to younger players with a penchant for hard rock and heavy metal. Other than that single detail, this is a very handsome-looking cab, with classic Vox visual appeal.

Then there are the sounds. The AD series also boasted Gain, Volume, and Master volume controls, which can be used in conjunction with the wattage knob on the back of each amplifier to achieve saturated, full tones at very low volumes. This makes the AD50VT perfect for player who needs both a practice and a gigging amp, as it's also capable of throwing out a lot of volume at higher settings.

There are 11 built-in effects, which range from subtle and very usable to tinny and probably not worth bothering with. The amp also gives users the ability to create and program two switchable channels that incorporate both amp models and effects. There's also a Manual channel, which in essence provides three channels.

The huge variety of sounds available within the Vox AD50VT means there's a bit of a learning curve associated with using it. It definitely pays to read the manual once or twice while using the amp at first, because some of the programming and editing techniques are less than intuitive. However, spending a little time getting to understand how the controls work pays off; once it begins to make sense, you'll find that it gives you a lot of control over a pretty wide range of good to great tones.

Switching between amp models is as easy as turning the Amp dial, and the EQ controls are pretty self-explanatory. While some of the amps modeled only featured Treble and Bass controls in their original configurations, the inclusion of a Mid knob just provides an additional tone-sculpting option.

The effects are easy to use--just hit the Bypass button to turn the light off (meaning that the effects are enabled), turn the knob until it points at the one you'd like to apply, and use the Edit knob to adjust the effect level. Holding down the Tap and Edit buttons while turning the Edit knob allows further editing of parameters; again, I'd recommend checking out the AD50VT's manual for further explanation of how this works with each effect. One can use the Tap button to tap in the tempo associated with time-based effects, such as the interval of time between delay repeats, the rate at which chorus, flanger or phaser swirls, and so forth.

Connecting the optional footswitch allows for toggling between Manual mode, Channel 1 and Channel 2. This can also be done via the buttons on the amp's control panel, but it's far easier to do while playing if you have a VFS-5 dual button pedal. However, it's worth noting that the footswitch did not originally come with the amplifier, so if you acquire an AD50VT used you may also need to seek one of these out separately. 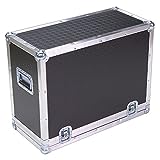 I've used the AD50VT in several different contexts: practicing, recording, and live gigs. It excels in the role of solo rehearsing, mainly because the wattage knob on the back of the amp functions like an attenuator would on a full-tube amp. It allows you to dial things down to 1 watt, or all the way up to 50 and all points in between. When using this knob with the Master Volume and Gain controls, it's possible to achieve thick, harmonically rich tones at bedroom volumes. It doesn't feel exactly like playing through a cranked tube amp, but you'd be surprised how much sustain can be squeezed out of a 1x12" at very low volume!

Additionally, this Vox combo makes a decent recording amp. I'm not sure I'd use it on a professional session, as there can be a little solid state fizziness in the treble when using certain amp models at high gain settings, but for demoing, if you insist on micing up an amp and dialing up cool sounds in a hurry, the AD50VT makes it pretty easy to capture very usable tones that strongly resemble those heard on classic rock recordings. For instance, the "UK 70s" amp model doesn't provide the punch of an un-modded Marshall half-stack, but it definitely conjures the appropriate vibe and will get you in the general area.

In terms of live performance, don't be fooled by the AD50VT's small size: with its closed-back cabinet, it has a tight low end and focused mid-range sounds that allow its tones to cut through a mix with ease. As mentioned, the high end can get a little fizzy from time to time, but whenever that happens, dialing back the Treble knob seems to help. The amp also has a pretty decent amount of volume on tap. The drummer from one of my old bands was easily the loudest I've ever played with, and my AD50VT was able to keep up with him without an issue. (Granted, it was usually pretty close to dimed.)

The only real problems with this amplifier pertain to live scenarios, where the depth of sounds and options is stymied by the controls' limitations. For example, it's really difficult to imagine why Vox only put two user preset channels into a digital modeling amp designed in the late 2000s. Surely, having 40 built-in presets and 40 empty memory banks wouldn't have been an issue in a day and age when 50 GBs of information can be stored in a USB drive that fits into one's pocket?

Additionally, the VFS-2 dual footswitch's connected cable is extremely short, which is a pretty big quandary when you're playing on a larger stage. This means you either have to keep the amp close by, or bypass the footswitch entirely and rely solely on external pedals for drive and effects. And even when you have the VFS-2 plugged in, there's a very slight pause in the sound as the amp toggles between channels. Again, this seems like an unreasonable problem for an amp manufactured within the last 15 years, and it can seriously throw off your timing if you're trying, for instance, to go from a clean chiming AC-30 sound on a verse to a roaring Marshall sound on a chorus--you don't want to sound late making that change, or your part loses a lot of impact.

The effects in the amp aren't terribly useful for someone who's accustomed to high-quality sounds from pedals. Fortunately, the AD50VT seems to play very well with almost all of the pedals I have run through it over the years. There isn't an effects loop but then again, most of the classic amps modeled here didn't have one either, so putting your pedals between your guitar and the amp's front end is pretty authentic.

The amp models range from thin and tinny-sounding (the Fender model) to rich and fairly accurate (the Vox models, naturally) to not-quite-correct-but-still-very-useful (the Marshall sounds). All in all, there's enough options available that half the fun with this amp is digging through and finding the things that work best for you, let alone applying them in day-to-day use. And there is definitely something to that hybrid technology: having owned several solid state and tube amplifiers, I find that the AD50VT actually has quite an appealing sound that isn't quite as spiky as a SS combo, but not quite as smooth as a tube amp. It has its own thing going on, and although I generally prefer to play through a tube amp, I find myself returning to this Vox over and over again because it's just kinda neat!

The AD50VT's multitude of great amp tones, the way it handles pedals, and the abundance of volume on tap make it a great choice of a gigging guitarist on a budget. It's also fairly lightweight with a very sturdy cabinet that can really take a beating!

I'm personally still not sold on the built-in effects, and the truth is, the short silencing that occurs when switching between channels is a serious issue which is another reason to stick with external pedals for coloring the signal. It's a bummer that a couple of the effects actually do sound good, but it's easy enough to switch them on or off manually.

If you can find an ADVT50 for sale used at under $200, I would definitely suggest checking it out. It would function best as a first amp for a beginner, or as a backup/secondary amp next to your main tube amp to get access to different sounds. Highly recommended!