The band has released seven studio albums, but it wasn't until the 'Bleed American', that they hit it big, with several singles charting from that release. The Middle hit number one on the 'Hot Modern Rock Tracks' list. The follow up album 'Futures' spawned another hit single 'Pain'. The band's sixth album, Chase This Light (2007), became the band's highest charting album, peaking at number five on the Billboard 200. 'Invented', the follow up to Chase This Light, was released on September 28, 2010 on Interscope Records. On January 29, 2013, Jimmy Eat World stated on both its Twitter and Facebook profiles that the eighth studio album was "officially mastered and sequenced". In a Twitter post on Lind's individual profile, the drummer revealed that, as of January 29, 2013, the band was still seeking out a record label for the release of the eighth full-length release. Lind briefly responded to a fan's query about the release date with: " no announcement coming soon. still looking for a label." 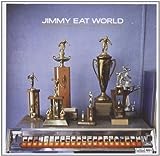 Jimmy Eat World (Bleed American)
Emo-rock band Jimmy Eat World exemplify all that is the modern radio rock sound. Singing and playing with a conviction and sincerity that will melt the heart of even the most stoic of listeners, they produce rousing, well-crafted anthems along the lines of Third Eye Blind at their roughest or a more polished Green Day. These guys appear to be able to write ready-made singles at the drop of a hat, as evidenced by "Your House" as well as the title track. In fact, there is a rather shocking maturity to their material that belies the band members' ages (all in their 20s). While they sometimes veer into cringe-worthy power-ballad territory, overall Jimmy Eat World give the people what they want with Bleed American
Buy Now

Once again, both charts are notated with rhythm slashes. the open chord chart is the same strumming pattern as 'You Belong With Me'. It is very common to treat the number as a downstroke and the 'and' as an upstroke. The count for the rhythm pattern is 1 2 and 3 and 4 and. The strumming direction is down, down-up down-up down-up. Once again, keep your strumming hand moving in a straight eighth note pattern and miss the 'and' of one (the first beat).

The chord progression is simple and extremely common. It is composed of the primary chords in D Major: D, G, and A. Many, many, songs are written with these three chords, the ever-present one, four, five progression. Ninety percent of blues, old country, and rock and roll songs are one, four, five. Many modern day pop songs, and new country employ the same format. It is a great idea to learn the primary chords in all keys, and a wonderful test for the ear, as many players can hear this chord progression without even touching an instrument.

I have notated palm muting for the verses, and strumming for the choruses. The pattern shifts from from all downstrokes in the verses to the same pattern that is found in the open chord chart, for the choruses. In order to execute the downstrokes effectively at this tempo (160-170 bpm), keep the strumming hand relaxed, a loose grip on the pic, and strum from the wrist. I have seem many students grinding down on the strings and using their forearm. This usually results in an uneven pattern, not to mention a sore arm.

Strumming power chords is a whole different technique, and can be quite difficult. The first finger not only holds down the root note, but also acts as a mute for the rest of the strings. Think of it as fingering a barre shape, but do not apply pressure to the muted strings. Execution of the Root 6 chords is easier, because you do not have to contend with muting the open sixth string. When strumming a Root 5 shape, use either the tip of the first or the edge of the second finger to catch the sixth string. Getting these chords to sound cleanly, where only the two notes are heard, requires practice.

Power chords are the first and the fifth of a Major or minor chord. When performing this piece, use a Root 5 D5, then move to Root 6 for the A5 and G5. This will save you from running all over the fretboard. There are many other ways to play these power chords. If you want to add a bottom-heavy sound, tune to 'Dropped D', that is the the sixth string goes down in pitch from normal E to D, an octave lower than the open D on the fourth string. The chord formation would be D5 (all open strings on the fourth, fifth and sixth), G5 (one finger barre across the fifth fret), A5 (one finger barre across the seventh fret).