The Oldest Cartoon Ever Drawn

The Cartoon Before the Cartoon

Logic dictates to some of us that drawing figures in the dirt or sand and later painting them on cave walls and rock outcroppings was the first form of non-verbal "written" communications.

Non-word vocalizations and hand gestures likely came first, followed by drawings done with twigs and sticks - unless a highly civilized world that could produce cartoons existed previous to current archeological findings and was destroyed without leaving evidence. There are oral stories and legends of such places in Africa.

We do not know exactly how many centuries that humans have been able to paint on cave walls, but researchers continue to search for the oldest writings and artistic creations.

Archaeology and physical anthropology are divided somewhat about whether Northern Asians and Northern Europeans migrated across the Bering Land Bridge in 12,000 BC or earlier around 38,000 - 48,000 BC; and whether Indigenous Peoples appeared in parts of old "Oceana" like New Zealand around 48,000 - 60,000 BC. And the uproar of people everywhere that don't want to be related by one gene to "Them" and therefore deny migration and intermarriage is deafening.

What's all the fuss? -- That's one topic for cartoons.

Whatever the case may be - and I am sure that it is interesting - even the Hebrews first wrote in pictures, because the entire Hebrew language is an alphabet of Word Pictures. The Chinese alphabet(s), just as old, are word pictures. Before these alphabets of pictures, we had the dirt, the sand, and the rock or cave wall for communications and when the pictures worked in expressing ideas we had cartoons.

In modern times, somewhere, someone purposefully invented the cartoon drawing, the comic strip, comic books, graphic novels, the animated short film and feature, and the computer generated animation and probably other comics-related genres. Who did the first cartoon drawing that we have found and what was the character?

The Ohio State University has been remodeling the Main Campus around the Oval from 2008 - 2012. Part of this upgrading has been the highlighting of various valuable museum collections that reside at OSU. The renovated Main Library includes a large museum room and various alarmed glass display cases around the main floor that have recently held Jesse Owens's Olympic Gold Medal, John Glenn's astronaut gear and many other treasures. In a building not far away, is the history of the cartoon.

The Billy Ireland Cartoon Library & Museum is a research library of American Comic Art on the Main Campus of The Ohio State University. Previously, it was named the Cartoon Research Library and the Cartoon Library & Museum. It provided numerous displays on the first floor of the Main Library of historic cartoon strips my such artists as Milton Caniff with his Terry and the Pirates, Steve Canyon, and others. In 2010, the organization is the most well developed academic research facility for the documentation of the printed cartoon.

This includes single panel and political cartoons, comic strips, comic books, graphic novels, sports cartoons, and magazine cartoons from such publications as The New Yorker and UK's Punch, which is unfortunately no longer in publication. Students would view displays at the library and journey to Long's Book Store (also sadly defunct, but absorbed by Barnes and Noble) across High Street or the University Bookstore on Neil Avenue in order to purchase copies of Punch and other magazines with current cartoon art from their creators around the world in the 1970s - 1990s. 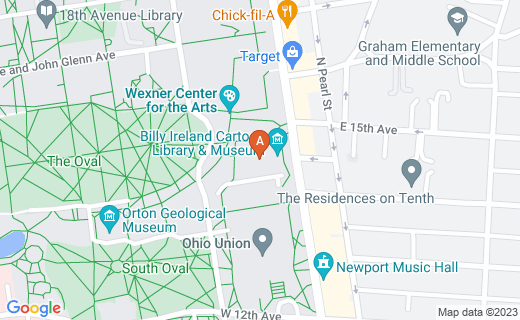 Sullivant Hall at the southwest corner of High Street and 15th Avenue at the OSU grand entrance was once the Ohio Historical Society museum, with a mastodon under its rotunda.

The building became a library and computer labs when the museum moved, then lost its book collection to the hugely renovated Thompson Main Library and most went dark. In 2010, planning began for the new home to the Billy Ireland collections at 15th Avenue and High Street. It now covers over 40,000 square feet with cartoon collections, manuscripts, and related galleries and work areas.It is a fantastic resource

It fulfills the dream of people that loved the idea of Sullivant Hall and the mastodon - the building is once again a museum.

The widow of Peanuts' Charles M. Schulz donated $1,000,000 and promised OSU Libraries a matching grant for any funds they could raise. In fact, she quoted a $2,500,000 cap and OSU raised its share. Even renowned Family Circus cartoonist Bil Keane and family donated $50,000. The new facility accumulated a $6 million fund in total and the university received a $7-million donation from the Elizabeth Ireland Graves Foundation to overhaul Sullivant Hall. All totaled, nearly $21 million poured into this project. But why Billy Ireland?

Ireland was a self-taught cartoonist from Chillicothe, Ohio. He was hired by the local paper, The Columbus Dispatch, in 1898 when he graduated from high school. He worked as a cartoonist for 37 years, drawing Dispatch political cartoons - the genre of which is still a favorite feature with readers - and a Sunday offering.

Will the Museum have the first cartoon? 3200 BC - A goblet discovered in an archaeological dig in Iran's Burnt City in the 1970s features 5 cartoon goat images and when you twirl the stem and look at the cup, the goat jumps up to eat the leaves of a palm-like tree.

The oldest cartoons known so far are among the following. Much of the content of the Billy Ireland Museum is locked away and not available to the general public.

1499 - This is a suspected political cartoon. it is an anonymously done woodcut Called Le Revers du Jeu des Suysses or Other Side of the Swiss Game. In it, the Pope, the Holy Roman Emperor, and Kings of France and England play cards -- Under the table, a Swiss Guard stacks the decks in a satire of French motives in Italy, specifically the support of elite Swiss Guard was vital to France (Microsoft® Encarta® Online Encyclopedia 2004).

1500 - Leonardo da Vinci worked in Milan on a theme of Blessed Virgin and Child with St Anne, and may have brought back a large cartoon he had produced, used as a stencil for applying to another medium and then painting the picture. These cartoons were often perforated so chalk could get through onto the new art medium (Il gigante: Michelangelo, Florence, and the David, 1492-1504, by Anton Gill, page 206).

1872 - First political cartoon by an African American, the former slave Mr. Henry Jackson Lewis, who moved to Arkansas from Mississippi.

These were drawn by Richard F. Outcault and included "The Yellow Kid."

Political cartoons had been drawn previously for at least 100 years in Ohio, during the American Revolution, and in UK, if not in other countries and around the world.

1948- Crusader Rabbit was test marketed. It is possibly the first cartoon produced for television.

First aired in August 1950 in California (Crusader vs. the State of Texas) and in select TV markets during its run.

Which is the Oldest?

I don't know if we have found the oldest cartoon in existence yet, but we know about some of the oldest ones in a range of historical eras.