The Seventh Season Of Sinha

From the folksy, pop tinged flip chords of the opening song Ripcord to the evocatively Americana narrative song Home, which closes out the sophomore excursion of singer/songwriter Devin Sinha, the listener is taken on a musical journey. The Seventh Season differs from Sinha’s first album, The Albatross, both in concept and execution. The Albatross was painted with more broad strokes insofar as its impressions of war, love and literary allusions and it was also a singular effort, with Sinha taking a solo role as singer, songwriter and guitarist. With The Seventh Season, Sinha has opened up his vistas by broadening his palette of musical coloring, utilizing well placed percussions and filling out the canvases of his songs with backing vocals and complementary instruments throughout. Even his vocals have matured, running from expressively expansive to quietly reserved and, on some tracks, such as Winter Child, like the soulful sound of ripping silk, hinting at the range that this young man possesses.

The album’s title, The Seventh Season, refers to the seventh season that he has lived in the state of Washington after leaving the Kansas City region following the completion of college, which garnered him a degree in Computer Science. Even though he played music while he was in college, it wasn’t until he arrived in Seattle that he began turning to his music in earnest, writing and producing his first album. His move from Kansas City to Seattle, which began merely as a pursuit of a steady “day job,” ended up becoming a synchronous event, turning the mundane pursuit of mere employment into the pursuit of a passion.

On Devin Sinha’s website, it states that he has drawn influence from the likes of the Dave Matthews Band, The Decemberists, The Mountain Goats, and Josh Ritter, but from the rapid maturity of his songwriting and structure, he is quickly forging his own musical path and it is a path that others will soon count as their own influence. Intrigued by his writing and his stylized song arrangements, I wanted to interview this upcoming musician, so his publicist, Kaytea Mcintosh (xopublicity) arranged it for me.

J.T. Ryder: A lot of your songs on The Seventh Season have, either lyrically or through the texture of the music, a feeling of expansive wandering. Do you feel that this comes from being raised in the Midwest?

Devin Sinha: This is a difficult question to give a succinct answer to! Of course, I am positive that my upbringing in the Heartland has influenced every aspect of how I approach life, and certainly my songwriting, but I hesitate to say that the feeling of wandering comes solely from that. I’ve made it a point to travel as much as possible in my life (I actually mailed my passport in for renewal yesterday!) and I think that love of exploring new places and cultures affects my writing as well. For The Seventh Season, much of the wandering feeling came from living in a new place on my own, where for a long time every day I was experiencing something new or meeting new people, which can be fascinating and stressful at the same time.

J.T. Ryder: Your first album, The Albatross, had songs that seemed far more personal and introspective. Especially when performing them, do you feel a sense of vulnerability?

Devin Sinha: I think both albums feature some songs that bring a lot of myself into them, even if I wouldn’t call every word autobiographical. The nature of The Albatross being a more solo acoustic record probably does bring the listener along with me more closely than the fuller arrangements in The Seventh Season, but when it comes to performing them, I definitely find times where I feel vulnerable performing songs off either record. I’m most vulnerable when I try to not think of it as playing the same song I’ve performed a hundred times, but really try to clear my thoughts and get myself in the headspace of the narrator of the song and feel what that person is feeling, which always leads to a more vulnerable performance on more personal songs. Vulnerability is great though! I always want to be as genuine as possible in my writing, and feeling connected to a song means I’m on the right track.

J.T. Ryder: Since your most recent album represents you seventh season in Washington, do you think that you would have been able to come this far if you were still in Kansas City?

Devin Sinha: I hope so! I love Kansas City, and it has a fairly vibrant music scene if you factor in Lawrence, Kansas as well (where the University of Kansas is). However, what really pushed me into performing and recording The Albatross was living on my own in a place that was unfamiliar. I think if I had been around friends and family in Kansas, I might never have taken that first leap. My first two years in the Pacific Northwest have really helped me grow as an artist and performer.

J.T. Ryder: With the addition of percussion and backing vocals, are there other directions that you want to explore in the future?

Devin Sinha: Before I ever picked up a guitar, I’d played trumpet for seven years throughout school. That’s something I’d like to get back into and incorporate into my music. For the next album, I’m spending more time thinking about arrangements, and debating whether to go with larger, more indie-rock inspired arrangements, or more pared down folk/country/Americana arrangements like the first album. In one camp, I’m influenced lately by bands like Typhoon, Lord Huron, and Sufjan Stevens which have some great larger arrangements. On the other side, there are artists like Keaton Henson, John Darnielle, Ben Howard, etc. that have done some great things focusing just on the lyrics and base melody to bring the listener with them. To take another artist I admire, I’m thinking “Do I make an album more like Iron & Wine’s Our Endless Numbered Days, or the more recent Ghost on Ghost?” I don’t have the answer yet, but I’ll be exploring it when I begin the next project.

J.T. Ryder: Your lyrics are extremely rich and rhythmic in of themselves. In your writing process, which comes first: the lyrics or the music?

Devin Sinha: It completely, 100% depends on the song. Often, I’ll start with the verses and let the poetry side work itself out, not thinking too much of where the music will go. Songs like Ripcord were done with the hook and melody in mind first, and the lyrics were built around that. The Sigh Of The Sea had the main guitar part written months before I ever wrote lyrics, so it varies wildly. I wrote The Wolves in a spark of inspiration at 2:00 in the morning one night and that poured out of me in about five minutes. Still, I have songs on my hard drive or notebook that I’ve been working on for years on and off that just haven’t materialized yet.

J.T. Ryder: Are there songs that started out in one direction but, through the process of songwriting, took a completely unexpected direction?

Devin Sinha: That definitely happens a lot! Sometimes, when I write the first verse, I think I have a grasp on what I’m trying to say, and then I’ll come up with a lyric that fits well but changes the tone of a song in a way that cascades to the rest of the lyrics and changes the direction. More often, the words might be locked, but the melody that I began writing in my head changes when I actually pick up the guitar and find something more interesting to me.

Devin Sinha's album, The Seventh Season, will be released on November 18th, 2014. Make sure to get your free download of his song, Lone Elm Road, and to watch his new music video of the same song linked below. 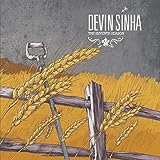