The Shawshank Redemption: Impact of Imprisonment to an Individual

The Shawshank Redemption: A Film Critique

The 1994 film “The Shawshank Redemption” is a well-known American drama film that represents prison as a place which has a high sense of discipline, institutionalization and deprivation of freedom, but this film also makes a reasonable comment about a positive attitude in our common lives. The movie depicts hope in the most clutch character when we get into trouble and the protagonist Andy who is a financier keeping his hope for escape from prison and using his wisdom to become successful. I have found some examples and resources about hope from the protagonist Andy, Red, Tommy, camera-as-narrator. Aside from the signs of hope for freedom is the hopelessness of being free since the prison has already marred them psychologically and socially. Although hope for freedom was seen to be the very goal, upon release, they are still haunted by their own self-prisons.

Given these details, it can be considered that the story is a metaphor for social and psychological imprisonment along with the name of Red as a symbol for hope and courage. “The Shawshank Redemption” depicts the struggle from prisons as to how convicts' consciousness can be imprisoned and how prisoners must psychologically deal with their life following their release from jail or even while in prison.

In the film, it is not hard to realize that the prison can bind both people’s body and people’s consciousness. They may have hope to be free, but their minds can never seem to forget that they were once inside cold cells being punished for crimes they may or may not have committed. The protagonist Andy never gives up even when the odds seem to be at their lowest. When he arrived in prison, he immediately began planning for his prison break. Red is the most well-known and the most respected people in the prison because he has spent his whole like in the prison, and he can get anything he wants because of money. Andy met him and asked Red to buy a chisel for him; Andy likes sculpting. At the end of the film, we know that the chisel was the tool for escape from prison. Andy kept digging his tunnel during the night and brought out the dust from his pockets and he kept doing this for 20 years. The chisel is the symbol for Andy’s sharp desire for freedom. He never stopped hoping for the duration of 20 years thus he was able to create a tunnel. From this example, it is not hard to find Andy’s hope. Digging a tunnel for prison break is an impossible and amazing thing but it was the indelible hope for freedom which pushed Andy to do this. Another example can be traced in Andy's statement: “Don’t forget that there are…places…in the world that are not made up of stone, there is something…inside…that they cannot get to…that is hope” Indeed as Andy said, the wall can just bind your body and even spiritual freedom but not hope. Life without hope will be nothing but Andy never gave up, so he kept digging every day. His friends Red and Brooks have given up the hope of freedom and they think hope is the origin of pain. Andy kept trying for 20 years and finally reached his goal and his hope also saved his friends life because his behavior influenced his friends. In my way of thinking, hope is valuable for every person. According to a short 1999 article by Luc Bovens’s titled Value of Hope, at some point hope also is crucial for people to survive after incarceration.

The struggles of the prisoners are challenging since these isolate them from the rest of the society. The internal struggle is at most stronger that the constant physical struggles they all have to face each day.

The Concealed Meanings within the Character Portrayals

The prisoners clearly mirror issues that they have before, during and after their imprisonment. One of the prisoners committed suicide in the story. This has a deeper meaning. It could be considered that the person has been experiencing anxiety. Anxiety can be an essential experience since it reveals the individual’s core issues (Tyson, 2006). In this case, the prisoners had their own sets of anxiety given the situation of incarceration. Since they have their core issues already, which are primarily their imprisonment due to murder and other heavy cases, they have their issues which were watered and developed in their stay. Their anxiety even surfaced to the point of committing suicide. The point of committing suicide is also a psychological matter since the person already listened to the id. It is also possible that their imprisonment has been repressed that it pushed them to opt to choices that are highly unfavorable for them. Repression is ignoring or forgetting the unresolved conflicts, hidden desires, or traumatic past events, so that they are forced out of conscious awareness and into the realm of the unconscious (Barry, 1967).As they try to deal with their imprisonment, they tend to repress the idea that they lack the freedom that the only option that one of them thought of is suicide. Suicide is the physical escape for them. Although realistically speaking it would not really be of help to person, committing suicide sets free the imprisoned mind and spirit with the person’s belief that he will be free from the bitter state of reality.

Where the Hope Begins

According to the film, Red also has hope for the freedom. For instance, when he has already completed 20 years of imprisonment, the parole officer asks him then he respond that “I absolutely regret. I had received lessons and I have already changed to a person who will not be harmful to the society. I swear to god.” But he got a rejected. From this case, Red really want to go out of the prison but as we know, the prison is not a place which shouldn’t allow to act like what them went. After that time, Red never feels that he will go out of the prison, the institutionalized has already changed him, so he will not fit the atmosphere out of the prison, but Andy changed him again. Andy is his best friend who lasted the friendship for 20 years and Andy has an impregnable hope for freedom and determination of escape out of the prison and finally Andy successfully escape from the prison. Andy left a note for Red says “Remember, Red, hope is a good thing, maybe the best of things. And no good thing ever dies.” Andy’s positive character influenced Red and he got some inspirations and hope. When he third time seated in front of the parole officer, he knows this is a chance for him to release because he will, he said “I was a young and foolish kid who committed a great sin. I want to sit down and talk to him. Tell him the rules to learn but it will not happen because that kid has already disappeared and only left an old guy.” These words unaffectedly reveal his hope. He felt the time has really changed him from that foolish young kid to now a person who will not bring hurt to society. Then he released by the prison successfully. The book Hope…The best of things from Joni Tada has the same opinion of hope with protagonist Andy. It kept him going despite of the challenges that he encountered inside.

This movie presents the challenges faced in the prison. Some makes it out successfully while other fail to do so. A prison is an instrument of repression which is used for disciplinary purposes. These are symbols for people to fear the idea of punishment. This form of punishment is life changing that it may make or break the person’s life. It is said that the adaptation to imprisonment is mostly challenging and difficult and creates habits of thinking and acting that can be dysfunctional in periods of post-prison adjustment (Haney, 2001.). This was evident in the entire movie since the prisoners were worried about their lives after the imprisonment. It was also mentioned that even after they were already set free, their lives were already different to how it was before they were imprisoned. It is a form of repression since, primarily, the prisoners are physically restricted from freedom. The heavier part of this incarceration is the psychological impact of this imprisonment to the prisoners. The long period of having to face only walls and to live in dark cells will alter the way of thinking of the imprisoned. Other people may consider it as a corrective method of punishment but the social and the psychological impact of the imprisonment are indelible. Prisoners who worked on both behavioral and emotional level to create a prison mask that is impenetrable risk themselves with alienation from themselves and others which may result to emotional flatness that becomes chronic and debilitating in social interaction and relationships, and may create a permanent distance between themselves and other people. In long periods of imprisonment, they develop the skill of having to be alone and detached from the people inside and outside the cell. Aside from the fact that they have to be kept from the rest of the community, the idea that they are being punished is another major issue to talk about. Red and Andy, despite of being characters of hope, end up being totally changed by their stay in prison. They may have internally changed and planned to do commit the same crime again, but the society had them marked already as people different from others. The stigma of being an ex-convict will always linger with them no matter where they go, and no matter how changed they are already. Like what was mentioned, it is a repressive instrument of the society which indelibly marks the people who enters the gates of the prison.

The characters in the “The Shawshank Redemption” have shown unbreakable grip on hope which helped them to maintain their sanity in their entire stay inside the prison and even in their lives outside the prison. This hope is juxtaposed with the hopelessness of the consciousness of the prisoner that it creates an interesting twist of push and pull. At the end of everything, it will be hope that will show you the positive side of life and it will keep you from getting insane with all the repression that you are encountering inside the cold cells of the prison. 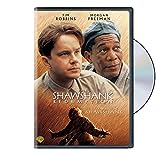