Like I did with my Bollywood article, I decided to make this a top 18 hottest Latin beauties, actresses, singers and models as opposed to a top ten, twenty or twenty five.

Why?
Just to be a little different.

I tried to stay away from the more mainstream Latin actresses like Salma Hayek, Eva Mendes, Eva Longoria and Penélope Cruz and aim more for the actresses that are less known here in the US.
So here are eighteen of the most beautiful Latinas in entertainment today!

Maite Perroni was a member of Rebelde and RBD.
She was born on March 9th,1983, in Mexico City, Distrito Federal, Mexico.
Maite has appeared on five TV shows and telenovelas and appeared in several stage plays.
She has been on the sexiest and most beautiful Latins lists by Quien, OK, H and Maxim.
In 2009, Maite was at the top of the Los 50 Más Bellos list from People en Español and in 2010, her fans named her "Queen of telenovelas".
From 2010 to 2011 she appeared on the telenovela Triunfo del Amor (Triumph of Love) as María Desamparada Iturbide Sandoval.

Gloria Trevi was born Gloria de los Ángeles Treviño Ruiz on February 15th,1968 in Monterrey, Nuevo León, Mexico.
She may have had her share of controversy (more than her share actually), but this lady has sold over 12 million records worldwide.
Gloria has released seven albums, over thirty singles and six compilation albums. 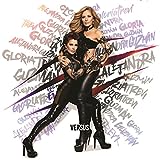 Mexican actress, singer, and songwriter Dulce María was born December 6th, 1985 in Mexico City, Federal District, Mexico.
She is probably best known as a member of Rebelde and RBD.
Even at her young age (25), Dulce has already appeared in eleven telenovelas, seven movies and three TV series.
And on May 11th, 2010, she released her first solo single, Inevitable, from her upcoming album, Extranjera.
Extranjera Part One was released on November 9th, 2010 and Part Two was released on June 14th, 2011.

Although she is well on the other side of 40 (she's 52), Maribel Guardia is still very popular.
She was born Maribel del Rocío Fernández García on May 29th, 1959 in San Jose, Costa Rica, but has found her greatest success in Mexico.
Maribel has an impressive resume, having appeared in over fifty telenovelas...so far.

This former Miss Venezuela (2007) and Miss Universe (2008) is Dayana Mendoza.
Dayana was born Dayana Sabrina Mendoza Moncada on June 1st, 1986 in Caracas, Venezuela.
She's unique in this list because she's the only one here that was once kidnapped.

Ivonne Montero may look like a fitness model, but she really is an actress.
This young lady with abs of steel was born Ivonne Garcia Macedo Montero on April 25th, 1974 in Mexico City, Mexico.
Since 2002, she has appeared in eight telenovelas, her most famous being Asesino en serie (Serious Killer).

Colombian actress and model Paola Rey was born Paola Andrea Rey on December 19th, 1979 in Bucaramanga, Santander, Colombia.
She made her acting debut in the 1998 Colombian telenovela "Sín límites" as Camila.
Paola made her big screen debut in the film Like Cat and Mouse (2002), a comedy that was produced in France.

Born in Cuba but raised in the USA, Mayra Verónica is a model and singer.
She was born Mayra Verónica Aruca Rodríguez on August 20th, 1977 in Havana, Cuba and in 1984 she came to the US with her mother.
After doing some modeling, reporting and taking acting classes, Verónica caught everyone's attention when she appeared on Univision's Don Francisco Presenta.
On a side note here, Mayra does a lot of work for troops.
She dedicated the proceeds of her 2008 calendar to the Wounded Warrior Project, she has gone to Iraq, Afghanistan, Germany, Turkey, Africa, and Greenland on a several USO tours, she dedicated her single, "Es Tan Dificil Olvidarte", to fallen troops, and has been to Camp Lejeune to visit wounded soldiers.

Victoria Ruffo is a Mexican actress.
She was born Victoria Eugenia Guadalupe Martínez del Río Moreno-Ruffo on May 31st, 1962 in Mexico City, Mexico.
Victoria has appeared on close to twenty TV shows and has worked for Telemundo and Televisa.
She made her acting debut in film, in the movie Discoteca es amor back in 1979.

Mexican singer and actress Susana Zabaleta was born on September 30th, 1964 in Monclova, Coahuila, Mexico.
Susana has appeared in telenovelas, films and on the stage.
On stage she first appeared in Barnum (1986), her television debut was in Cadenas de Amargura (1991) and her film debut was in Sobrenatural (1996).

Mexican actress and former Miss USA (1985) Laura Harring was born on March 3rd, 1964, Los Mochis, Sinaloa, Mexico.
This former Miss El Paso USA, Miss Texas USA, Miss USA and top ten finalist at the 1985 Miss Universe pageant overcame some adversity as well.
At the age of twelve, she was hit by stray fire from a drive by and took a bullet to the head.
She has appeared in General Hospital, Mulholland Drive, The Punisher and The Shield, but a lot of you may know her as Elizabeth Fisher on the CW's Gossip Girl.

Our second Susana is Mexican actress Susana González.
She was born on October 2nd, 1973 in Calera de Víctor Rosales, Zacatecas, Mexico.
Susana made her acting debut in the 1996 Televisa telenovela, Sentimientos Ajenos and has gone on to appear in almost thirty telenovelas and TV shows.

Okay, back to Mexico really now with Mexican actress and model Anette Michel.
Anette was born on June 30th, 1971 in Guadalajara, Mexico.
She started out as a model to help her family financially and wound up making her acting debut in the 1997 TV series Al norte del corazón.
Anette went on to appear in seven more TV series.
As of this entry, she and her husband Gregorio Jimenez are expecting their first child.

This beautiful young lady is Colombian model, actress and television presenter Carolina Guerra.
Carolina was born in 1986 or 1987 somewhere in Colombia.
Pretty secretive huh?
She was Miss Bogotá in 2005, and was the host of MTV's Rock Dinner and the reality show ¡Viva el sueño!.
Carolina has appeared in the telenovelas Montecristo, La Diosa Coronada and El cartel 2 - La guerra total.

Mexican actress Alejandra Barros was born on August 11th, 1971 in Mexico City, Mexico.
She made her acting debut in 1996 on the telenovela Confidente De Secundaria.
Alejandra has since gone on to appear in ten telenovelas and seven films so far.

Carmen Dominicci is a little different from the other ladies on this list, as in she is a model, news anchor, television reporter and PSA representative.
Well she has done a little stage and TV acting, but not a lot.
She was born on July 15th, 1966 in Ponce, Puerto Rico and may be best known for Univision's news show, Primer Impacto.

Even though she is Polish, Alicja Bachleda-Curuś was born on May 12, 1983 in Tampico, Tamaulipas, Mexico.
But Alicja is one of the most international entries on here.
She was born in Mexico to Polish parents, she moved to Poland, then she moved to the US, worked in Europe (mainly Germany, Switzerland and Poland), met Colin Farrell and had a son with him who is a citizen of the USA, Poland and Ireland.

Who is the best out of these Latin Beauties?

Who is your favorite out of these Latina beauties?