Anti-Valentine writes music reviews and sometimes writes about the music industry. He has a particular fondness for thrash metal.

This is essentially a continuation of the first article, Top 10 Thrash Metal Albums That Nobody Listens to. I know that there are likely dozens more albums out there that are worth a listen, and because I hit ten on the last hub, I wanted to make another, so here it is. 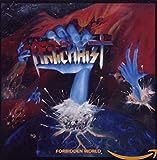 This band is a lesser known one from Europe – Sweden to be exact. This solidly falls into the melding of genres known as Black Thrash or Blackened Thrash. This is due to the coupling of thrash riffs that sound reminiscent of the 1980’s (in fact overall the album sounds like it was produced in that era – not necessarily a bad thing), and awesome vocals that are more in line with Black Metal. In fact the vocals don’t take centre stage like a lot of bands tend to do – emphasise the vocals and lyrics rather than the instruments. I can’t even make out what the guy is singing most of the time, and I don’t care. The vocals complement the guitars wonderfully.

Two things that I enjoy about this band are that they are no stranger to making long songs – some come close to 10 minutes, and they also don’t shy away from instrumentals either. These are two things that I don’t see a lot of in more modern thrash metal, and they seem to have it down. But they don’t do it in the same vein as somebody like Metallica would have done back in the mid to late 1980’s, with repetitive riffs. It is claimed by others who have had a crack at reviewing this album that this album is much more influenced by German thrash, like Kreator or Destruction.

You should really give some of their other more recent songs a listen too. And the demo for this album, Crushing Metal Tapes is insane -- particularly the version of "Torment in Hell" on it.

Two things that I enjoy about this band are that they are no stranger to making long songs – some come close to 10 minutes, and they also don’t shy away from instrumentals either. These are two things that I don’t see a lot of in more modern thrash metal, and they seem to have it down. 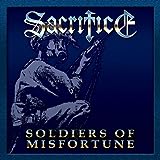 This band was once considered one of the big four Canadian thrash metal bands, who would later go on to reclaim that honour years after the release of their most recent album.

Sacrifice, as underrated as they always have been on the world stage, have never really produced a bad album. I liked their early efforts, particularly Forward to Termination, but this one is on an entirely different level. They started off with a more black or death metal sound with their first album, Torment in Fire, and just evolved from there.

1990 was the year that several excellent thrash metal albums were released – thrash metal par excellence was the order of the day, and this album was undoubtedly up there. It was nowhere near as well known as something like Rust in Peace, but it is almost just as good really. It’s one of the few albums I can listen to all the way through from beginning to end.

They started off with a more black or death metal sound with their first album, Torment in Fire, and just evolved from there.

Target was the apprentice to the rather well known German thrash metal band Mekong Delta. They hailed from Belgium, and I’ve only really heard of two thrash metal bands from there – this band and another one whose name really escapes me, although they're are obviously more than that in reality.

So needless to say they weren’t particularly big at any point, but they were pretty good, it has to be said. They were signed to Mekong Delta’s record label and even had a similar sound. The album has a more technical flavour to it, and theme-wise it seems to be about post-apocalyptic society, automation, and the likes, which is quite different from what most thrash metal bands tend to focus on – usually stuff of the more occult variety or political themes – but not unwelcome.

I can’t help but draw comparisons between it and something like Black Sabbath’s Dehumaziner, particularly when I look at the cover art. Think of this album as one big "Computer God", and you’ll get the idea. It also seems to have taken some inspiration from heavy metal as opposed to thrash metal in the way that it’s kind of slow. That’s one criticism I have of it. Not slow speed wise, like mid tempo thrash or anything, but just slow in the way that there doesn’t really seem to be a sense of urgency. It’s kind of mellow compared to what you’d usually expect from a thrash metal album.

That said though, the vocals are particularly well done – perhaps even some of the best I’ve heard on any thrash metal album.

I can’t help but draw comparisons between it and something like Black Sabbath’s Dehumaziner, particularly when I look at the cover art. Think of this album as one big "Computer God", and you’ll get the idea.

Another late album on the scene, but it is probably one of the best thrash albums from the 1980’s. Jimmy Hamilton sounds quite a bit like Russ Anderson, or at least he has that same hallmark that Russ had – that while he may not have an incredible vocal range, he is able to hit some pretty high notes, and they are clean as anything I’ve ever heard.

In fact this entire album reminds me of Forbidden’s early albums, like Forbidden Evil, and especially Twisted Into Form.

The demo versions of the songs on this album are godly too.

This entire album reminds me of Forbidden’s early albums, like Forbidden Evil, and especially Twisted Into Form.

I’m not really a big fan of Kreator. I was always convinced that there are indeed better bands from Germany. I don’t like Pleasure to Kill for instance. It’s fast, but the riffs are average at best. Much of their early music was like this, and stuff that came later sounded better from a technical point of view, but just slowed down a lot – too much even. This album strikes a good balance between the two; between being technical, and being fast. It’s slower than PTK, but the musicianship on offer here is a lot better than anything they’ve done before or after, and while it is certainly an underrated album, to those in the know, and dare I say it, those who have good taste, it’s hands down the best Kreator album ever made.

This album strikes a good balance between Pleasure to Kill and Extreme Aggression; between being technical, and being fast. The musicianship on offer here is a lot better than anything they’ve done before or after. It’s hands down the best Kreator album ever made.

Deathrow put out two albums before this in the 1980’s and they were more straight up speed metal. Satan's Gift or Riders of Doom and Raging Steel were still very good albums in their own right.

Their style changed with this album and they showed a much more technical side – and it is glorious. It’s one of the only albums that I’ve listened to where during the first few moments of the first track, it made me exclaim some rather choice words out loud.

This continued with their follow up album in 1992, but apart from having better production, it didn’t sound as good as this one.

I would even say that all things considered, Deathrow just might be my favourite German thrash metal band ever, ahead of Kreator, Sodom, and even Destruction.

Their style changed with this album and they showed a much more technical side – and it is glorious.

The answer to both of those questions is Stone.

They are highly influential when it comes to thrash metal from that part of the world, and yet are still very underrated in general. They managed to put out a few albums, all of which are good, but the first one is still the best, and proves that you don’t need to have a voice that sounds like you swallowed a tub of acid and whole lot of atonal Slayeresque noise for a thrash metal album to sound good.

Most German thrash is known for being very brutal, punishing on the ears, but Paradox is different, or at least this album is. One person put it thusly: Heresy is the best Metallica album to never be released by Metallica.

It’s a bit like discovering an album from a place that you would never expect to get thrash from, but the thing is that Germany has always been one of the hardest hitting thrash areas on the planet – it’s just that when I listen to this I can’t even believe it’s from the same country. Most German thrash metal albums are virtually devoid of melody, and that’s why I don’t particularly favour them much, but this isn’t – it takes your usual harder hitting stuff and mixes it well with melody, and it isn’t just that brief reprieve that you would get in say Sodom’s Agent Orange where it’s mainly brutal stuff with a small interlude where you have a more melodic guitar riff – with Heresy it’s interwoven into the core of each track.

Heresy is the best Metallica album to never be released by Metallica.

This is a band from the USA, and it’s quite hard to believe really because in my opinion very few thrash metal bands from the US are that good nowadays. You usually have to listen to stuff from Europe, particularly Scandinavia, to get that proper thrash sound.

This band then could be great and they might not be. They are different, for sure.

They have an interesting mix of black metal and thrash metal going on, with death metal vocals. In their following album, which I even considered including, they also experiment with surf metal and grindcore sounds. It all sounds good, but in the end I think I chose to go with Transmission Zero because it is closer to a true thrash sound, and perhaps Splatterthrash is too much of a departure, and tracks do sound a bit samey and repetitive. Good, but not as good, I would say, as this album.

Hang Ten was not a very good album in general, but definitely check out Dungeon Bastards, which is a return to form, and sounds more like Transmission Zero. 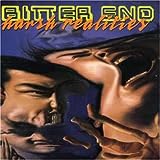 This is a strange album. On one hand I dislike it and yet on the other hand, I can’t help but like it. It’s not a very original album, it lacks any sort of urgency.

It’s not that it isn’t fast, but probably not heavy enough. This is what I would refer to as mellow thrash metal, which doesn’t really go anywhere. It sounds quite a bit like Megadeth from the vocals to the sound of the guitars – kind of 1990 Rust in Peace era ‘Deth. This isn’t a bad thing, but it does come back to the whole lack of originality issue. It’s still quite a good album though, and it’s one that I can listen to almost from start to finish save a track or two.