Beatles-Platz or Beatles Square in Hamburg

Graham Sclater returned from Germany to form Tabitha Music Limited in 1976, a music publisher and record label. He has produced many albums released globally. In 2011 he signed Bo Walton, releasing several singles and the hit album Waiting On a Dream.

After The Beatles Left Germany...

Ticket to Ride...a musician's journey through the sixties...

Second Edition Published in USA by Tabitha Books on March 18, 2012 and in UK in September 2012

Reading Ticket to Ride is quite an eye opening experience and a welcomed entry of gritty knowledge for those unaware of the rock music scene in Germany during the 1960s. It was a time of Cold War and cold realities for the English rock groups that struggled to make it to renown and wealth in Hamburg. The very first page of the book smacked me between the eyes and made me sit up straight and listen open-mouthed to the entire exciting story.

Based on composite portraits and events, this book is clear about life as it was in those rock and roll days for young musicians wanting to be The Beatles or perhaps something even better. “Bigger than the Beatles” was a dream of dreams for some although an often-failed one.

Rock careers in Hamburg from 1965 - 1970 were often not as fun or glamorous as expected. Hundreds of European and American rock groups jumped full on into the sixties music scene and were spit right back out. Now I am shell shocked and well informed, sad and elated at once - and I want to read the book again.

A few groups created success in varying degrees. They plotted the range of fame from total failures and one-hit wonders to the long-lived Rolling Stones. April 2012 saw the Stones’ 60th Anniversary as a hit rock group and teenage garage bands still want to be them. I often wondered what went on in Hamburg during and after The Beatles.

If you weren’t living in the UK or Germany, or didn’t have a relative in a band traveling around Germany in the 1960s while freezing or starving to death, you’ve little idea of that corridor of history. We might have appreciated these young groups’ efforts a bit more had we known of their hardships and their drive to continue making their beloved music no matter cost. Some died. Who knew that music was so dangerous? All these sixties musicians deserve a monument and this book is that tribute.

Ticket to Ride feels like an autobiography and while it may be only fractionally autobiographical, its characters and events ring totally true. Success for the Cheetahs rock band is intermittent at best and not everyone has a happy ending. Hearts and bodies are broken, but business continues for promoters and club owners as if nothing happened.

The story follows the five-man group called the Cheetahs, quickly put together to fill a gig in Germany. The musicians include college-aged Dave, a men’s wear assistant who helps his mom schedule rock gigs. Stumbling upon a letter requesting a group for Germany, Dave marshals the group. Other members are Dave’s friend Tony who loads beer onto trucks; Gerald, just 16 years old with an expired driving permit; Adrian in his early 20s and already professional; and 17-year-old Jimmy who lives with his partially deaf grandmother.

These young men travel in winter from Devon, England to Hamburg in a rundown borrowed van without heat. They drive dangerously close to the Berlin Wall and its snipers and come close to losing their lives several times in their adventures. His or her first accommodations in Hamburg are so horridly filthy that anyone vomited immediately upon entry. Their year in Germany was the hardest that many might imagine and fewer might try, with the exception of a TV reality show and a big payoff. The pace of the Cheetahs’ career exhausted me in the reading as they moved from club to club and from various German cities to Switzerland and back. 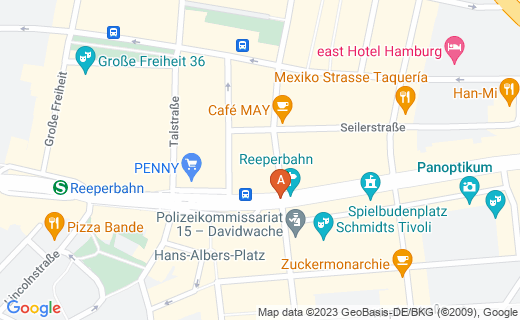 The young men play 30-night contracts of long hours on stage, sometimes after 12-hour road trips. After the last set each night, they socialize, make useful connections at other clubs, and may reach their beds by 6:00 or 7:00 AM if they are fortunate. Then they rise at teatime to power through another long day’s night.

After a contract is completed, they scurry to secure another and are not always successful. In addition, club owners do not always pay and we see another group living in a van in January. The pace is breakneck and harrowing in Hamburg's Reeperbahn district full of temptations -- The Cheetahs have fun, but are absorbed into inordinate drinking, recreational drugs, the pleasures of prostitution and female fans, along with STDs, violence, and worse. This all reminds me of The Great Depression (with more music and drugs) in that many died in the attempt to work in hard times. Hamburg Beat Central was just as hard. There was not enough ecstatic glamour to satisfy late sixties groups, but there was useful experience for later use. The Cheetahs improved from their hard work despite obstacles, but their only recording appeared after a brutal year and the breakup of the group. However, surviving members seem to intend to go on with music, while the causalities lost friends become deep memories.

The Cheetahs are people that readers want to know better. We hope for their best and lament when bad things happen. We laugh at the way they come by their stage costumes and transportation. Sometimes we are appalled, gasping when their lives are in danger, but many times they have fun. The relationships are interesting, especially between Jimmy and his estranged dad, Dave and his mom, and Gerald and his. This is the best story of the sixties rock era, including biographies like No One Gets Out Alive by Jerry Hopkins about Jim Morrison and the Doors, who also performed in Germany during the era.

Musician and author Graham Sclater did much more than survive Hamburg; he went on to found a successful music-publishing house, Tabitha Music Limited. In the sixties, he spent time playing and jamming with rock stars like Jimi Hendrix and Elton John, Fats Domino and James Taylor. He was called Sandy and played the organ (like Gerry of the Cheetahs)in Hamburg (1964 - 1969) for bands called "The Wave," "The Birds & The Bees" and "The Manchester Playboys". Then he returned to England with useful experience and a lot of memories. His novel Ticket to Ride is an extreme close-up of the late sixties Reeperbahn experience for rock musicians and it is on the mark. It illustrates a place that many of us have never seen before