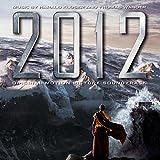 If you can't stand heat, then you'd better get out of Sony's kitchen. Adam Lambert's music video for Time For Miracles, the theme song from the film "2012", has caught on fire.

And not just from the meteoric firebombs bursting around Lambert in the video. As he wanders ruefully through the apocalypse, performing gratuitous eye sex with the camera, he almost makes us forget that the end is near...and gives anyone with a libido the will to go on. Both the song and the video contain elements of hope and longing, even amidst total planetary devastation.

And that's all before the first chorus.

As Lambert makes his way through a chaotic path of panic-striken pedestrians, buildings are collapsing, streets are crumbling, and the sky is falling. Oblivious to the chaos surrounding him, however, he forges ahead.. pleading his case.

Haunting, yet uplifting, the song's message is clear; Never give up on love.

The vocals are first rate.The bridge towards the end of the song in particular, allows Lambert to exhibit his expansive range, accompanied by his emotional connection to the lyric.

Sony wins the trifecta for formula, strategy and timing on this one. How is this done? First-produce a film about the end of the world. Second - release a powerhouse song from the film, performed by the newest g-force in music. Third - scruff him up, dress him down, add a sexy pout, and drop him into a music video comprised of clips from your blockbuster disaster movie -

And have your bean counters on standby for an all night-er.

As for Lambert, his world is anything but over. And although this song may not be representative of the musical style contained in his upcoming CD, it's a solid introduction into the mainstream.

We'll soon find out if he can sustain the intensity of heat he's generated so far.