Ma-re is a certified K-drama and K-pop enthusiast. She always likes to discover something new about the wide world of Korean entertainment.

Korean girl groups are so popular around the world. They are known worldwide - not only for the music they make, but also with their amazing dancing skills, good sense of fashion, and everlasting beauty. But before they became sensational groups, they have worked hard for several years to be in their place now. Intense training and discipline, maintaining their beauty regimen, and dealing with hectic and tight schedules gives them sleepless days and nights, but they have shown to the world that they can do it. We have seen some of their imperfections, but because of their passion and dedication to entertain, we tend to focus on the beautiful side.

There are many girl groups trending around, and it is very hard to tell who's in the lead, because there are many supporters and fans worldwide. However, polls and lists made gives us the idea who's the most successful Korean girl group as of now.

This list shows who's the top 10 Korean Girl Group in the early 2015, based on their success, earnings, and most especially, their popularity.

Two years ago, Polaris Entertainment formed "Ladies' Code", a successful K-pop girl group which is originally composed of five members, with Ashley as the leader, and RiSe, EunB, Sojung and Zuny as members. They are known for their retro and pop music which was dubbed by Billboard magazine as "modern-electro pop" with "classic throwback elements" and powerful vocals. However, a tragic car accident happened on September 3, 2014, which resulted in two members' death - EunB and RiSe. But this heartbreaking event didn't stopped the remaining members of the group to continue their passion. On April 26, 2015, it was reported that Zuny, Ashley, and Sojung have begun practicing again, although there is no report of comeback yet. Even though the group is in hiatus, their achievement from the past years still contributes to make them at the top 10 K-pop girl group for the first half of 2015, and their music is still popular today.

One of the most successful K-pop girl group who made it in the top 10 list of the best female Korean group in 2014 based on their overall sales ranking is the 4minute. Formed in 2009 by Cube Entertainment, with five members who are blessed to be very talented in dancing and singing. The members of the group are Nam Ji-hyun, Heo Ga-yoon,Jeon Ji-yoon, Kim Hyun-a, and Kwon So-hyun. The five members, with their great teamwork and coordination, makes them successful in their performances. Their combination is just perfect, and their confidence onstage is very remarkable, and that gives out every best performance that one can possibly see. They also have songs in Japanese language, and their singles and albums are primarily released and sold in South Korea and Japan.

It was six years ago when a popular Korean girl group called SECRET was formed by TS Entertainment. Although their name suggests a hidden identity and anonymity, it is actually the opposite of what they are. They are known in the world for their great performances and amazing singing and dancing, making the retro style as their primary musical style. Seoulbeats recognized them as the "Queens of Retro" since "Magic" and "Madonna" was released. The group is composed of four pretty ladies, namely: Jun Hyoseong, Han Sunhwa, Song Jieun, and Jung Hana. It is said that their main appeal to the audiences is its retro beat and sexy choreography. Their dance moves are elegant, yet easy to follow. They are also known for their cute and girly fashion which is very trendy today.

Also known as "Ace of Angels", these lovely ladies are truly beautiful. Looking with angelic faces, you'll definitely fall in love even more when you see them with their talent in performing, singing, and dancing. They debuted in 2012 and until now, they are popular not only in South Korea but also in Japan for making music. The members of the group are Seolhyun, Choa, Hyejeong, Chanmi, Yuna, Mina, Jimin. They started gaining fame and support through their album entitled "Angel's Story". For this year,the group has just released their “Like a Cat” album in Japan.

The group started their humble beginnings as "Asia Pop Dance Group" but later on, they gained more popularity and huge success hits around the world, thus, renaming the group as FX, which is also stylized as f(x). They are currently composed of five members, including Victoria, Amber, Sulli, Luna, and Krystal. It is a multi-national K-pop girl group formed by SM Entertainment in 2009. In terms of beauty, talent, style, and fashion, this girl group is one of the best. They have also received international recognition, being the first K-pop act to perform at SXSW, and their album "Pink Tape" was the only K-pop album chosen by the American music channel Fuse to be at the "The 41 Best Albums" of 2013.

Girl’s Day is one of the most successful and most popular Korean girl group which comprises of four pretty and splendid female members, namely, Sojin, Yura, Minah and Hyeri. Formed under Green Tea Entertainment since 2010, Girl’s Day has come up with many popular songs such as “Nothing Lasts Forever”, “Twinkle Twinkle”, “Hug Me Once”, “Don’t Forget Me”, "Female President" and "Darling". This group is known for their great coordination. Their dance moves and music became a big hit for female fans and supporters.One of their biggest hits is “Something” which has topped the chart. They are also popular worldwide, for performing internationally onstage.

Sistar is a well-known and an active Korean girl group which was formed in 2010 by Starship Entertainment. The group has four lovely and pretty members including Hyolyn, Soyou, Bora, and Dasom. The group became so popular because their performances are wonderful - they have a great combination of their beauty and talent. They have also tarted their career by actively modelling for magazine photos until they made their debut with their song "Push Push". Following their debut was the huge success, giving them bigger opportunities in singing and dancing, thus, creating more popular music such as " Alone", "Loving You" , "So Cool", "Give It to Me", "Touch & Move", and "Sweet & Sour".

A girl group that started their career in 2011 under the Cube Entertainment, "A pink" has been one of the most popular and most successful Korean girl groups, and now, in the first half of 2015, stays in the third position in the list of the top 10 Korean girl groups. This position is the result of their hard work, perseverance, incredible talent in singing, dancing, and performing, and most especially, their remarkable beauty. As of now, there are six members who are actively in the group: Yoon Bo-mi, Park Cho-rong, Jung Eun-ji, Son Na-eun, Oh Ha-young, and Kim nam-joo, after Hong Yoo-kyung left the group in 2013. They made their debut with the "Seven Springs of Apink", and the latest activity from Apink is their Paradise concert tour from which they have had a great success.

2NE1, a very popular Korean girl group in the world, is a four-member South Korean girl group formed by YG Entertainment in 2009. The name is pronounced "to anyone" or "twenty one", and is combined after the phrases "21st century" and "new evolution. The group consists of four members: CL, Minzy, Dara, and Park Bom. They started in a commercial campaign with Big Bang for LG Electronics, and their first single, "Fire" was released on 2009. Their song "I Don't Care" brought them the "Song of the Year" award during the Mnet Asia Music Awards. They also gained popularity throughout the world, and made their debut in Japan in 2011. Today, this group with four talented and gorgeous ladies are so incredible that they made their high rank at the top 10 Korean girl group of 2015's first half.

Many would believe that even after many years, SNSD (stands for So Nyeo Shi Dae, also known as Girls' Generation) is the most popular and the most successful Korean girl group in the world. Formed and managed by S.M. Entertainment in 2007, there were 9 original members, including Taeyeon, Sunny, Tiffany, Hyoyeon, Yuri, Sooyoung, Yoona and Seohyun, but as of now, there are 8 active members for the group, since Jessica had been excluded in 2014. They made their debut in 2007 with the single "Into the New World" and there the careers and wide opportunity for entertainment became open for them. Not only known for their music, but Girls' Generation has become a prominent figure in the whole world, credited for playing a major role of introducing the South Korean culture. They started with their conservative styles, performing without any makeup and wearing only their plain white t-shirts. But later, they started highlighting the sexy side, which gives them a more mature image. Today, Girls' Generation's huge success is a solid proof that they deserve to be at the top place of Korea's best girl group of 2015. 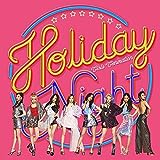 Who's your favorite Korean girl group?