As you may have noticed the main person that this hub is dedicated to is Marshall Bruce Mathers III also internationally known as Eminem (Including various different aliases like Slim Shady). He is a very famous and successful rapper that has made millions of dollars through his career, and is proud to call himself the best selling artist of the decade, he sold over 32 million albums!

Eminem is mostly known for his exceptional microphone skills, his wordplay and flow is incredible, he is a very skilled writer and freestyle artist. Eminem usually intends to mock somebody in his rap, for example in his recent beef with Mariah Carey started by Eminem dissing her in his new album Relapse, then came songs like "The Warning" during his wonderful hip hop career Eminem has gone through a lot of beef's most famously involving feuds with such Hip Hop artists as Benzino, Whitey Ford (Everlast), Ja Rule. Slim Shady also has a softer side, where he talks about his emotions, life, family etc. The softer side of Eminem song list includes such songs as "When I'm Gone" or "Beautiful"

This song is a bit similar to "The Way I Am" due to the violent language and thoughts on his personal life, but this is more calm. You can see that Eminem just observes the situation and talks about what is happening in his private life, what's happening between him and the media, the situation of hip hop, and he didn't exclude his family in this one also.

This song has a really strong message in it. It's aggressive and emotional, in this song Eminem intends to motivate you, also talking about how he doesn't give up, and also mentions the rap game of course. I remember just feeling down, or unmotivated, and turning this song up just always got me in fight mode, I was ready to go it provided me the energy I needed. This song is perfect for getting you in the right mindset before any sports games or exercising you need to get pumped up for.

"Cause sometimes you feel tired,
feel weak, and when you feel weak, you feel like you wanna just give up.
But you gotta search within you, you gotta find that inner strength
and just pull that shit out of you and get that motivation to not give up
and not be a quitter, no matter how bad you wanna just fall flat on your face and collapse."

Well this one is a touching song where Slim opens up and talks about his family problems, his love for his daughter Hailey and his situation with wife Kim.

The issues of his family are that the daughters are always sad and lonely because their father Marshall never stays around and he is always working, always on tours, recording, doing concerts.

"These fuckin' walls must be talking, cuz man I can hear 'em
They're saying "You've got one more chance to do right" - and it's tonight
Now go out there and show that you love 'em before it's too late
And just as I go to walk out of my bedroom door
It's turns to a stage, they're gone, and this spotlight is on
And I'm singing..."

#7 Cleanin' Out My Closet

Another family topic covered here, this time it's problems with Eminem mom. The main thing Eminem is aiming here to explain to everybody is how terrible his mother used to treat him, by beating him and not taking care of him, and now once that he has made it and he became famous suddenly she wants to be his friend, and she treats him all nice.

Another deep song by Em

"Have you ever been hated or discriminated against, I have, i've been protested and demonstrated
against, picket signs for my wicked rhymes, look at the times, sick is the mind of the
motherfuckin' kid that's behind, all this commotion, emotions run deep as ocean's explodin',"

"my whole life I was made to believe I was sick when I wasn't 'til I grew
up, now I blew up, it makes you sick to ya' stomach, doesn't it, wasn't it the reason you made
that Cd for me, ma"

First of all what I really dig about this song is the beat, the producer did a really nice job on this one. Once Eminem kicks in it gets even better, the energy of the song speaks for itself, Eminem once again show's off his amazing lyrical skills, damn this man is just amazing!

"They call me superman, leap tall hoes in a single bound
I'm single now, got no ring on this finger now
I'd never let another chick bring me down, in a relationship
Save it bitch, babysit, you make me sick
Superman ain't savin' shit, girl you can jump on Shady's dick"

This song is directed to the publicity and the media, and how much the whole industry just pisses of Eminem off. As always Eminem is lyrically amazing on this song, there's so much energy on this song!

"Cause I am
Whatever you say I am
If I wasn't, then why would I say I am?
In the papers, the news, everyday I am
I don't know it's just the way I am "

One of the best Eminem songs ever, definitely top 4! The story behind this song and the execution is just perfect. The whole message Marshall Mathers is trying to send with this song can touch everybody. The lyrics are just amazing, the whole idea, the music, the video, everything about this song, from beginning to end just makes me want to start to shiver. One of the best, no question.

"Sometimes I even cut myself to see how much it bleeds
It's like adrenaline, the pain is such a sudden rush for me
See everything you say is real, and I respect you cause you tell it
My girlfriend's jealous cause I talk about you 24/7
But she don't know you like I know you Slim, no one does
She don't know what it was like for people like us growin up
You gotta call me man, I'll be the biggest fan you'll ever lose
Sincerely yours, Stan -- P.S.
We should be together too"

Just a really really touching story, Eminem goes emotional once again in this song. He speaks about his controversial beef's with other rappers and the outcomes of the feuds.

"I'm supposed to be the soldier who never blows his composure
Even though I hold the weight of the whole world on my shoulders
I ain't never supposed to show it, my crew ain't supposed to know it
Even if it means goin' toe to toe with a Benzino it don't matter"

#2 Sing For The Moment

Unbelievable! This song is just marvelous! First of the beat is tremendous, the emotion of this song, the message it's just so touching. Eminem lyrically once again is amazing. Everything is just perfectly done on this song!

"These ideas are nightmares for white parents
Whose worst fear is a child with dyed hair and who likes earrings
Like whatever they say has no bearing
Its so scary in a house that allows no swearing
To see him walking around with his headphones blaring
Alone in his own zone, cold and he dont care
He's a problem child, what bothers him all comes out
When he talks about his fuckin' dad walkin out
Cos he hates him so bad that he blocks him out
But if he ever saw him again, he'd prolly knock him out"

This song is no doubt, the best song Eminem has ever made! Lyrics are strong, touching, emotional whatever you call them - their just AMAZING! The piano at the start.. The beat.. I just love everything about the song!

"Yo, his palms are sweaty, knees weak, arms are heavy
There is vomit on his sweater already
Moms spaghetti, he's nervous
But on the surface he looks calm and ready
To drops bombs, but he keeps on forgetting
What he wrote down, the whole crowd goes so loud
He opens his mouth but the words won't come out
He's choking, how? Everybody's jokin' now
The clock's run out, time's up, over BLOW!" 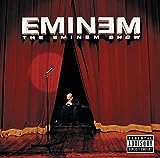 Check out my other hubs