Heavily influenced by artists such as James Brown, Oakland-based soul and funk band, Tower Of Power, has been playing music for over 50 years. One critic called them "tighter than a clenched fist." Yes, tight is a word that always comes to mind with Tower of Power, whose intricate syncopation and jazz-fusion riffs have placed them in the R&B pantheon. So let's check out Tower of Power:

The group's first bass player was Francis "Rocco" Prestia. In fact, he's played almost continuously with the group since its inception. His popping, ornate bass lines have marveled folks for decades. Bassist Vito San Filippo has also recorded with TOP.

After signing a recording contract with Bill Graham's San Francisco Records,TOP released its first record East Bay Grease (1970), whose greatest hits are the slow, flute-oriented ballad "Sparkling in the Sand," the funky, driving "Knock Yourself Out" and the bouncy and powerful "Back on the Streets Again." (This was the only album the group produced with Bill Graham's San Francisco Records.)

Tower of Power's first album with Warner Bros. Records was Bump City (1972), featuring such hits as "Down to the Nightclub," "You Got to Funkifize," and "You're Still a Young Man," the latter tune peaking at number 29 on Billboard's Hot 100 in 1972.

As well as playing horns, Emilio Castillo and Stephen Kupka have also written many of the band's songs; their first collaboration was "You're Still a Young Man."

With the release of the TOP's fourth album, Back to Oakland (1974), the band became a little more funk-oriented. This album's hits are "Don't Change Horses (in the Middle of the Stream)" "Time Will Tell" and one of their most impressive instrumentals, "Squib Cakes."

The lead vocalists on TOP's first two alums were Rick Stevens and Rufus Miller. Stevens left the band after being sentenced to life in prison for three counts of first degree murder. Stevens was released from prison in 2012 and died of cancer in 2017.

Smooth-voiced Lenny Williams sang the lead on the band's third, fourth and fifth albums. On the fifth album, Urban Renewal (1975), Williams sings a tune expressing a socio-economic consciousness - "Only So Much Oil in the Ground," it's called. This tune was made during the first Arab-oil embargo, which spawned long lines at gas stations throughout the U.S.

On their sixth album, In the Slot (1975), Hubert Tubbs took over as lead vocalist. There are no big hits on this album. Perhaps the best songs were the jumping, decidedly funky "Just Enough and Too Much" and the rollicking instrumental, "Ebony Jam." Hubert Tubbs also sang the lead on Live and in Living Color, TOP's first live album released in 1976. (This album was recorded at the Sacramento Memorial Auditorium.) This work includes a 23-minute version of "Knock Yourself Out," featuring an incendiary organ solo by long-time TOP keyboardist Chester Thompson.

Sting once had a Tower of Power clone band before he formed The Police.

In TOP's seventh studio album, Ain't Nothin' Stoppin' Us Now (1976), the band created two more songs dealing with socio-economic or geo-political issues: "Can't Stand to See the Slaughter" and "While We Went to the Moon." Some words in the latter were: "In the race for space, does it really matter who's in first place? Are we accomplishing anything much, or are we just trying to save face?" Many of TOP's songs deal with issues facing the common man - blue collar types, if you will. In fact, TOP could be called a blue collar band.

Perhaps some of TOP's best lyrics are evident on their mega hit "What is Hip?" written by Emilio Castillo, Stephen Kupka and David Garibaldi. Here's an excerpt: "So you want to jump out your trick bag and ease on into a hip bag/But you ain't just exactly sure what's hip/So you started to let your hair grow, spent big bucks to cop you a wardrobe/But somehow you know there's much more to the trip/What is hip? Tell me, tell me, if you think you know/What is hip? If you're really hip, the passing years will show."

Fresno, California native Bruce Conte, played lead guitar and wrote songs on TOP's early albums from 1972 to 1979, when he left the group. He returned briefly with the band in 2006 and 2007. His cousin Victor Conte played bass with the band in the middle to late 1970s. Victor Conte's work can be heard on TOP's eighth album, We Came to Play (1978).

Bruce Conte started his career with the Roadrunners (a Fresno, California band) in the middle 1960s, and then joined San Francisco's Loading Zone in 1970. After leaving Tower of Power, he played with Jump Street, Cold Blood, Hot Street and then El Chicano. Over the years, he's made four solo albums.

In 1979, the band released their ninth studio album, Back on the Streets (1979), a work somewhat influenced by the very popular disco sound. (Rod Stewart, Kenny Loggins, Earth, Wind and Fire, and others, were similarly inspired.) Led by new lead vocalist Michael Jeffries and guitarist Danny Hoefer, the album’s biggest hits are “Rock Baby,” “Nowhere to Run” and “It Takes Two (to Make It Happen).”

In spite of drug problems, frequent changes in personnel (especially at lead singer) and the disco onslaught, Tower of Power produced an album a year for the decade of the 1970s.

TOP's horn section has great renown as a backup ensemble for bands and artists such as Little Feat, Santana, Elton John, the Jefferson Airplane, John Lee Hooker, Rod Stewart, Huey Lewis and the News, Aerosmith, Poison, Michael Bolton, the Eurhythmics and Spyro Gyra, among many others.

1995’s album Souled Out features a tribute to James Brown titled “Diggin’ on James Brown.” It would be hard to imagine Tower of Power without the Godfather of Soul’s influence. Included on the album is another tune dealing with socio-economic issues, namely “Taxed to the Max.” Perhaps the album’s greatest song is the lively title cut, “Souled Out.”

Saxophonist/composer/arranger Lenny Pickett, who played with TOP from 1972 to 1981, began playing in 1985 with the house band on Saturday Night Live. In fact, since 1995 he’s been the band's musical director on SNL. Not bad for a guy with a ninth-grade education and no formal musical training!

Perhaps TOP’s best album in recent years is Rhythm and Business (1997). Produced by the group’s founder Emilio Castillo, the album’s greatest hits are “So I Got to Groove,” “You Do the Math,” “What’s Your Trip,” and “Rhythm and Business.” It’s perhaps the only one among their recent albums that ranks with some of their best of the 1970s.

Over the years, Tower of Power has had at least 60 different band members.

In 1998, saxophonist/lyricist Stephen Kupka founded Strokeland Records to further his songwriting career and help other funk, jazz and soul artists do the same.

One of TOP’s more recent studio works is Oakland Zone (2003). Left from the original band of 1968 are Emilio Castillo, David Garibaldi and Stephen Kupka. The album’s greatest tunes are “Give Me Your Love,” “Oakland Zone” and “Eastside.” This album could be one of their funkiest to date, and that makes a helluva lot of sense; as with sex, doesn’t funk get better with age?

In its many incarnations, Tower of Power still exists after 50 years and shows no sign of disappearing any time soon. Even though their “heyday” may be over, Tower of Power is still one of the finest live acts in the world of pop music. And, although they don’t produce many studio albums these days, their latest one is the Soul Side of Town (2018), on which you can hear “Hanging with My Baby,” a tune that's solid gold TOP, especially as it relates to the artistry of their fabulous horn section.

Another recent studio album by TOP is Step Up (2020), which includes a single with the same title. It’s about recent social and political events in the US and urges people to get active and produce positive results for you and everyone else. (TOP has produced many similar tunes over the decades.) Also, TOP used some female background singers on “Step Up,” the single, to spice up this R&B fare, and most fans will be glad they did!

Please click on the link below and listen to some of Tower of Power's licks: 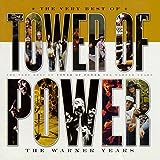 The Very Best Of Tower Of Power: The Warner Years
Buy Now