The ancestry of the Japanese koto can be traced back to the Asian mainland. However, traditional music for the Japanese koto has little in common with that of its Chinese and Korean relatives. Its history in Japan spans more than twelve centuries, and it has found an appreciative audience in the West in recent years.

The longest of the long zithers of East Asia, the koto has a body of paulownia wood (kiri) about six feet long. Over this elegant, slightly convex body are stretched thirteen silk strings under equal tension, each string supported on its own individual bridge (ji). Because each ji is individually movable, an infinite range of tuning systems are possible, and indeed it is not uncommon to modify the basic tuning during the course of a performance.

The strings are plucked by three plectra (tsume) of ivory, worn on thumb, index and middle fingers of the right hand. The pitch of each of the strings may be modified, raised by a semi-tone, tone or tone-and-a-half, raised or lowered by ornaments of various kinds, enhanced with vobrato, etc., and this is done by manipulating each string with the left hand.

The bulk of the traditional repertoire find the Japanese koto serving as accompaniment for the voice, quite often songs derived from classic poems. Recent compositions tend to cast the koto in instrumental solos or ensembles.

Striking in appearance and featuring a wide range of playing techniques, the Japanese koto produced one of the most characteristic and evocative of sounds associated with Japanese music.

Yatsuhashi Kengyo (1614-1685) is the father of modern koto playing. With his innovations in techniques and styles, the music began to move away from older aristocratic traditions towards more modern, popular idioms.

Beginning with the activities of Yatsuhashi Kengyo, Japanese koto music became the concern of professional musicians and of a middle-class, well-educated in artistic matters. There was also a shift in the function of the music, from spiritually inclined ceremonial music to secular entertainment.

Another great composer of Japanese koto music, Michio Miyagi (1885-1956), was a blind genius who left more than 300 compositions and numerous technical innovations, as well as invented the 17-string bass koto (jushichigen), the 80-string koto and other instruments.

Rentaro Taki (1879-1903) is regarded as one of the most distinguished composers in traditional Japanese koto music. His music, mostly with songs, is known to most Japanese people.

History of the Japanese Koto

Koto Music in the Yayoi Period

A Wagon or Yamato Goto (Japanese Koto) with five strings and a length of about one metre, played on one's knees, existed in the 3rd century, the late Yayoi Priod, according to figures found at burial sites. The koto was regarded as a sacred instrument, and it represented a status of power, thus it was an instrument which emperors played. It gradually developed to be regarded as an instrument to accompany songs and dances. Parallel to this, it received six strings and its shape and size were modified to a length of about 6 1/4 feet and a width of about 6 inches, with maple bridges. This type of Japanese koto is still used for Shinto ceremonies and Gagaku (court music).

The present day koto can be traced back to the 7th century in Japan and was introduced from the T'ang Dynasty (618-907) in China, at the height of China's political, technical and cultural development in many fields.

Koto Music in the Heian Period

During the Japanese Heian Priod, which lasted for about four hundred years (794-1192), the koto was played in Gagaku. While being modified and developed, it was played by aristocrats and people at court. This was a period of development of a refined culture, with readings of poems (Waka), writing of stories and novels by court ladies, (e.g. Genji Monogatari, regarded as the world's first novel, written by a woman novelist, Shikibu Murasaki, in 1008). This was the time when Britain had another invasion by the Vikings in the 9th century and the Normans in 1066.

Emergence of Buddhism in Japan

Between the beginning of the 12th century and the end of the 16th century the Japanese koto was not played as much. This was due to the decline of the activities of the nobility and aristocracy and the emergence of new religious orders of Buddhist sects, prompted by an unstable society with internal turmoil and intermittent civil wars. This was when the warrior classes began to rule the country. The koto was used for some religious ceremonies. During this time traditional cultural customs such as the Tea ceremony (Sado), the Noh theatre, and Ikebana (flower arranging) took root.

Towards the end of the 16th century, a monk took up the koto again and modified it and freed it from its restrictions of use. In the middle of the 17th century Yatsuhashi Kengyo, a composer and musician in Kyoto, invented new tunings and techniques and modified the instrument so as to be played by a much wider spectrum of society. The Japanese koto became part of the education of cultured people, especially daughters of the nobility and of well-to-do merchants. From then on, other musicians, mostly in Kyoto, began to compose for the koto, mainly for the purpose of accompanying Jiuta, the singing of poetry.

In 1695, Ikuta Kengyo (1655-1715), a pupil of Yatsuhashi, began teaching and playing the koto and shamisen (a three-string banjo introduced in the 16th century Okinawa) together for the first time. Previously, Yatsuhashi would prohibit such duets, fearing that the image of the Japanese koto as an upper-class instrument might be degraded if they were allowed. In order to play with the shamisen, Ikuta modified the plectrums of the koto and invented new tunings. This was the origin of the Ikuta school. Since that time the koto was played much more widely than ever before.

At the end of the 18th century, the format of the jiuta changed to allow a long instrumental interlude (Tegoto) in the middle of the sung poem. Now there was a Mae-Uta (before-song), Tegoto and Ato-Uta (after-song). Most of the composers who followed the new for were from the Kyoto and Osaka areas.

In Edo, present day Tokyo, the Japanese koto had never taken root until Yamada Kengyo (1757-1817) established the Yamada school as distinct form the Ikuta school of the Kansai area. Edo was the new capital established in the early 17th century when Tokugawa Ieyasu began to rule Japan. Half of its population is believed to have been men and there was no noble image to the instrument. Thus the musical tastes in Edo were quite different from those of Kansai. Yamada composed music that appealed to Edo tastes modifying the plectra to rounded edges while Ikuta-style plectra had square edges.

Towards the end of the Edo Period, in the Bunka-Bunsei era (1804-1829) there was a surge of the compositions of musicians who were experimenting with new kinds of koto/shamisen music, sometimes purely as instrumental pieces without singing, or as duets. Previously, koto and shamisen were played in unison or octaves. Ichiura Kengyo composed a second voice for koto or shamisen. It was Yaezaki Kengyo of Kyoto, a genius of Kaede (second-part) composition, who wrote a number of pieces, which were called Kyo-Mono or Kyo-Ryu (Kyoto-style jiuta).

Koto Music at the End of the Tokugawa Shogunate

Mitsuzaki Kengyo was a revolutionary composer who sparked a revival of Japanese koto music by writing koto duets and solo pieces. In general, appreciation of classic arts, literature, poetry and music became very popular among cultured people of this period of instability at the end of the Tokugawa era, and they yearned for the elegance and refinement of the Heian court culture.

Yoshizawa Kengyo of Nagoya (1800-1872) developed a new tuning and composed several pieces which were inspired by the poems in Kokin Waka Shu (a collection of poems compiled in 905). His spirit of revival of the imperial court culture in his music was in some way reflected in the high spirit of many future leaders who eventually overturned the Tokugawa Shogunate.

The Meiji period and the Introduction of Western Music

In Meiji 5 (1873), the hereditary system of blind musicians, introduced in the Muromachi Period in the 14th century, was abolished, as were other relics of the feudal systems. However, many blind musicians and composers formed their own organizations for their mutual benefit. Influenced by the dawning of the new era, the music too expressed the spirit of the time and new, refreshingly joyous compositions appeared, particularly in Osaka and Kyoto, using new techniques and major keys instead of the previous minor keys.

During the Meiji Period, the Ikuta and Yamada school merged, which would previously not have been possible. The shakuhachi, a bamboo flute, that was previously restricted to be played by monks of the Fuke Buddhist sect, was given a place in music, replacing the kokyu (a spike fiddle similar to the shamisen) in the ankyoku music (played by koto, shamisen and shakuhachi). However, as time went by, more and more of the upper class and cultured people became interested in western music and other western things.

Western music was introduced into the national music curriculum at schools and replaced traditional music; traditional Japanese koto music, its appreciation and its composers were losing ground. Thus around the turn of the 20th century, the existing koto music did not fit in with the new spirit of modernism and fell out of use. It was as though the traditional music was vanishing. 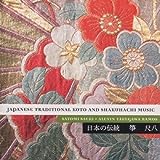 Michio Miyagi: Koto Music in the 20th Century and Today

Shin Nihon Ongaku (new Japanese music) or Michio Miyagi saved traditional music from dying out completely. From the Taisho Period (1912-1925) to the beginning of Showa Period (1925-1989), Miyagi and other distinguished young musicians, composers, poets and academics got together to give a new lease of life to Japanese koto music, introducing some western element and new techniques into traditional music to appeal the fashion of the time.

Encouraged by his supporters, Miyagi composed more than 300 pieces of music, most of which were still based on traditional classics, attracting great numbers of followers and young people. This was a sensation in Japanese music, which encouraged new composers who were greatly influenced by Miyagi. In this uncertain period of rapid cultural change, his emergence was a timely gift for the world of Japanese music.

As Japan entered into the modern age changing tastes in various cultural pursuits, music too had to follow suit to keep up with the changing cultural climate. Up until then it had always been understood that learning classical music was a base knowledge and skill necessary to education. Now, encouraged by the New Japanese Music movement, a number of composers began to write pieces that would be appreciated much more easily by learners and the general public alike.

Since the musical education at school consisted entirely of western music, people's ears were not developed into being able to appreciate traditional Japanese koto music. Music to the new generations meant western music. After World War II, the westernization in every field in Japan became the norm. The number of those who learn the skills of traditional arts and crafts and music has been declining quite drastically.

Now, at the beginning of the 21st century, only a small minority of musicians, who understand it as their duty, are making an effort to keep traditional Japanese music alive. There is a glimmer of hope, since, as from April 2002, after almost 120 years of neglect, traditional music has been introduced into the curriculum of secondary musical education, though only as a very basic introduction.