Angela Gossow is one of those vocalists in the music business that will leave many fans in awe because of her ability to growl so effectively and do a death metal voice just like a man! The first album that she was a member of was the album Wages of Sin released in 2001. Yes, 2001 was over 18 years ago but enough time has passed that this writer feels that a proper tribute should be given to Angela Gossow for her talent, hard work, and dedication to one of the greatest bands in Sweden. Angela Gossow was a member of the bands Asmodina and Mistress before she joined Arch Enemy. She is from Germany and along with Sabina Classen of Holy Moses, she is Germany’s best female vocalist but she does death metal vocals and is one of the best in the genre. I did not know what to think after she replaced Johan Liiva but she proves that she is worthy to be in this band. We will also briefly address her role in the 2001 album called Wages of Sin because what tribute to Angela would be complete without this?

Angela early on in her life felt like she had to move out of the house because when she was 17, her parents divorced and faced such financial troubles that affected their business. It was around this time that she joined the band Asmodina. After her graduation from high school, Angela joined an advertising company as a trainee and she was specializing in marketing. She was also studying economics.

It would be in November of 2000 that Gossow would join melodic death metal band Arch Enemy. She had earlier interviewed guitarist and band founder Michael Amott for a German webzine (online magazine). After the departure or firing of Johan Liiva, Angela was called in to do an audition and she did so well that Amott later remarked that “she wiped the floor with all the other contenders,” (Muthoni, 2019). In the album Wages of Sin one of the biggest highlights and the best songs in the album is Ravenous. The harmony parts played by brothers Michael and Christopher Amott are so brilliant that there are no words left to describe them. The song is about a blood sucking creature, probably a vampire that is out to get human blood. The solo near the end of the song is excellent as well! The way that Angela says the word ravenous, i don't even think that Jeff Walker could have done as good a job on the song.

There is one event in her life that happened that created controversy however. It was revealed that Gossow and Amott dated for several years and at one point became engaged but they broke up. Fans accused Gossow of getting the job in Arch Enemy due to her being romantically involved with Amott. However, in an interview with Blistering Metal News, she and Amott denied that such a thing was ever true. Gossow was more expressive and maybe angry about the accusations saying that “It’s not easy being a woman.” That is the sentiment that I feel as well because women are put to a different standard than men are and they are judged more harshly in some cases. Gossow mentioned that contrary to what fans assumed, she did not get the vocal job in Arch Enemy because of being involved with Amott and in fact she almost lost her job in Arch Enemy because of this.

Why did Angela Gossow leave Arch Enemy as their vocalist?

In 2014, Gossow announced that she would be stepping down as Arch Enemy’s vocalist. Her then new job would be acting as the band’s manger behind the scenes. She gave her reasons for leaving Arch Enemy as the vocalist. Gossow revealed that she no longer had the same passion and joy to be doing the job and constantly being on the road and traveling. She would rather leave the position rather than stay there and pretend to like it. She has been active in the music business since 1991. Angela Gossow is one of my favorite death metal vocalists along with Tokiko Shimamoto of the band Shadow.

Which one of these two former Arch Enemy vocalists do you think was the better one?

A map of Cologne Germany, the birthplace of Angela Gossow 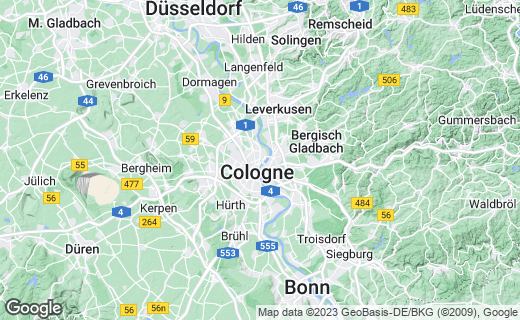