The trombone developed from the straight trumpet in the 15th century. As I mentioned in another article, since early on in its history, the trombone has been associated with special occasions, including water processions, parades of various types, weddings, coronations, and a wide range of religious celebrations. Christmas, of course, is one of the primary religious celebrations in the Christian calendar, and music has traditionally been an important part of that celebration.

The trombone, which has an extensive history as a religious instrument, has participated often in Christmas musical performances, instrumental and vocal, both as a regular member of the ensemble and as an added member for this special season. Settings range from grandiose polychoral motets in Venice's St. Mark's to struggling "Christmas waits" in the streets of industrial London. Below are some highlights.

c. 1522-23—Munich, Germany: Albrecht Altdorfer’s painting, Mary and Child in Glory, includes a depiction of an angel trombonist among several other angel musicians (see detail and full image below; public domain; Winzinger 45) (thanks to Stewart Carter and Herbert Myers for help identifying this painting). Although the painting is not a nativity, of course, the theme of Mary and child makes it Christmas-related.

1561—London, England: A witness of Christmas entertainments at the Inner Temple in central London reports, “At every course the trumpeters blew the courageous blast of deadly war, with noise of drum and fyfe, with the sweet harmony of violins, sackbuts, recorders, and cornetts, with other instruments of musick, as it seemed Apollos’ harp had tuned their stroke” (Nichols 134).

1602—Venice, Italy: The nucleus of musicians at St. Mark’s cathedral, which includes four trombones and cornetts, expands for Christmas day music, when six extra trombones are hired among the 14 additional instrumentalists (the others are three cornetts, two violins, and a violone) (Moore 81; Tim Carter, Music in Late 117).

1603—Venice, Italy: According to a treasurer’s note detailing the instruments employed for the music at St. Mark’s cathedral at the midnight Mass and Christmas morning Mass, more trombones are employed there than any other instrument that they utilize. The instruments include one violin, three cornetts, one trumpet, four trombones, a bass violin, a bassoon, and a portatif (on the balcony), in addition to the two main organs.

1607—Venice, Italy: Jean-Baptiste Duval, French ambassador to Venice, visits St. Mark’s cathedral on Christmas day, hearing music in which “the double organs and different instruments, such as trombones, cornettos and treble violins were united with voices of the singers, and all this indeed filled the church and produced a grand harmony" (Kenton 35).

1610—Claudio Monteverdi's famous Vespri della Beata Vergine, often referred to in English simply as Vespers of 1610, calls for trombones in the sections that specify instrumentation. The sections of the work intended for the Christmas season, typically called Christmas Vespers, probably also utilize trombones. See video below.

c. 1615—Germany: Michael Praetorius utilizes trombones in his setting of In Dulci Jubilo (see video below).

1622—Siena, Italy: At the church Santa Maria di Provenzano, the 4-singer chapel is augmented with a trombone for music of the Christmas season (Reardon, Music and Musicians).

1623—Siena, Italy: As in 1622 (see above), at the church Santa Maria di Provenzano, the four-singer chapel is augmented with a trombone for music of the Christmas season (Reardon, Music and Musicians).

1755—Bethlehem, Pennsylvania: According to local legend, a group of Moravian trombones ward off an American Indian attack in the early morning of Christmas Day. Indians supposedly interpret the sounds of the Moravian trombone choir playing a Christmas chorale from the roof of the Brethren's House as a sign that the Great Spirit will protect the Moravians, and they subsequently abandon their plans for attack (Carter, Trombone Ensembles of the Moravian).

1847—England: A wood engraving depicts a group of Christmas carolers, including a trombonist (see below image; public domain).

1853—London, England: H.G. Hine’s The Waits at Seven Dials portrays a group of “Christmas waits” or street musicians, including a trombonist. After the Municipal Corporations Act of 1835, there were no more official waits as funded by British municipalities, but ad hoc musicians often formed during the Christmas season, playing throughout the streets of London in hopes of raising money (see below image; public domain) (Illustrated London News, December 1853).

1873—Paris, France: Christmas Eve in a Spanish Church, a print after Miranda appearing in the Paris illustrated newpaper, L’Illustration, features a buccin, or trombone with a bell in the shape of a dragon’s head (see middle-left of below image; public domain) (L’Illustration, January 4, 1873, pp. 10-11).

1911—Martinez, California: A mission established by Moravians forms a trombone choir in the fall of 1911. For Christmas, the trombone choir, vocal choir, and orchestra perform together. A report in a Moravian mission publication explains, "Christmas at Martinez was a most joyous festival. After much labor the Sunday School, together with the vocal and trombone choir and the orchestra, succeeded in rendering the cantata 'Christmas' in an admirable manner" (Carter, Trombone Ensembles of the Moravian).

1913—Philadelphia, Pennsylvania: An article from The Record reports the following on Christmas day: "High above the crowd came a flash of light from an unexpected place. It was the cupola of the tower of Independence Hall... Into the lighted space stepped the six members of the celebrated trombone choir of the Moravian Church at Bethlehem, who welcome Christmas with the sounding of their instruments every year in their home town. They had been brought to Philadelphia for the first time to take part in the city's first municipal celebration. Raising their long instruments to their lips, the trombonsits sent forth a blast over the heads of the crowd. First they played 'How Brightly Shines the Morning Star," then "From Heaven High to Earth I Come," and finally, very sweetly and in moderated tones, they sounded the notes of 'All My Heart This Night Rejoices" (Quoted in Joanne Martell, American Christmases: Firsthand Accounts of Holiday Happenings, 224).

1965—The now-classic "Charlie Brown Christmas" airs for the first time. Based on the comic strip Peanuts by Charles Schulz, the animated feature uses trombone in place of all adult voices. According to the animator, Bill Melendez, "Sparky [Schulz] didn't want any adult voices in the films, either, so we came up with the idea of using a trombone. In the recording studio, an actor would read the line to the trombone player using a lot of inflections in his voice. The trombone player would then play and shape the musical line to mimic the inflections of the actor's voice" (Mendelson, A Charlie Brown Christmas: The Making of a Tradition, 58). 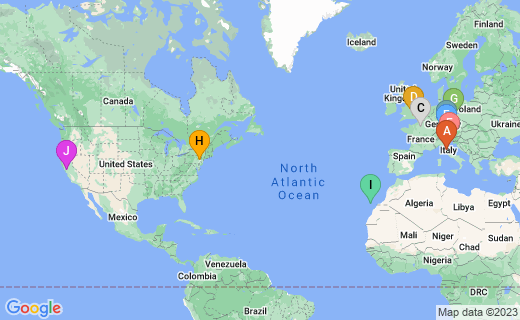