Born in the 1950s in Yorkshire where she still lives this English woman has a keen interest in politics, travel, music and animal welfare

Over the years British television has entertained with some great situation comedies but it has also at times embarrassed and bored leaving viewers wondering just what was supposed to be funny about certain scripts.

Overall however the great British Situation Comedy has left us with some fine series and many are often still shown on a regular basis.

So join me in celebration of the Good, as I skip over the Bad and perhaps ignore the Ugly, of British Comedy.

Humour of course is a strange thing and what makes one person roll about in the agony of hysterical laughter could leave someone else cold and stony faced.

With that in mind here are some personal comedy favourites.

Norman Stanley Fletcher played by the late great Ronnie Barker was the seasoned petty criminal back doing porridge or rather serving time in prison for this popular BBC series.

With a great cast and characters this unlikely funny series was quirky and unmissable viewing.

Back in nick a.k.a. prison Fletch was joined by young Lennie Godber played by the late Richard Beckinsale.

Sadly Beckinsale died young and his death ended the follow on series which was called Going Straight.

A Porridge movie had some success and is still occasionally shown on TV.

Porridge the half hour episodes from the series are regularly shown.

The Good Life followed a couple trying to become self sufficient whilst living in middle class suburbia.

When Tom Good hits the big 4 0 he decides he is going to leave the rat race behind.

He and his wife plough their large garden and set about growing crops and keeping livestock.

It is the unlikely setting as well as the characters that make for funny scenes.

With a snobby next door neighbour called Margot life is never going to be easy.

Still Margot and her husband Jerry are really friends of the Goods and despite the strain in their friendship help them often and in more ways than one.

At the time I was just married and everything about the Good Life appealed to my sense of humour.

The characters of Tom and Barbara Good were the type that I would have aspired to be back then and the gentle humour was consistently good.

Still shown the situations and fashions may have dated somewhat but the humour is still there.

The Fall and Rise of Reginald Perrin

Leonard Rossiter starred as Reggie Perrin in this off the wall comedy.

Not to every-one's taste, The Fall and Rise of Reginald Perrin was right up my street, as we say.

After Reggie becomes tired of his life he fakes his own death in an attempt to start again. With weird and wacky characters the humour is a mixture of the silly and the sublime.

Shown originally between 1976 and 1979 it soon became popular viewing.

The show was recently back on air but as a remade version with Martin Clunes in the role of Reggie.

The plots were altered a little to fit into today's lifestyle.

However the original Reggie Perrin is a hard act to follow.

The Fall and Rise of Reggie Perrin

Citizen Smith Power to The People

Robet Lyndsay is the multi talented actor who took on the role of Citizen Smith the young leftie wanting to change the world and give power to the people.

His character also called Wolfie but incorrectly Foxy by his girlfriend’s mother was a lighthearted laugh at the political naivety of youth.

Wolfie Smith was a would be Marxist leading the Tooting Popular Front, TOF, which was more a band if friends than a revolutionary political force; Tooting being an area of South London.

Both sadly died some time ago.

Some of the laughs involved the race card but were of the time.

Frances de la Tour and Don Warrington have proved themselves to be first class actors though both have occasionally taken on comic roles.

Fawlty Towers only consisted of 12 episodes but it has been popular worldwide and still receives huge viewing audiences.

Just why is hard to decide.

It is most likely a mixture of the cast, characters and scripts.

His wife Sybil Fawlty in the show is played by Prunella Scales but John Cleese's wife at the time also starred in Fawlty Towers.

Connie Booth played the chirpy Polly who helped around the hotel.

Leonard Sachs as the Spanish waiter who had a poor command of English, Manuel, was so often the butt of the joke.

This multi award winning series was initially shown on BBC2 in England at a time when not all Television sets were able to show BBC2 programs.

Because of this it was a while before I saw Fawlty Towers but I soon became a fan.

Although the series was first aired in 1975 it is as fresh and funny today as ever.

Also in The Mix

There were many other comedy series that were shown in the 1970s that were funny.

However some of these were only funny for a very limited time.

With time some of these now seem to be very dated, racist, sexist or more. Open All Hours is one that for me falls into this category.

So for my favourite situation comedies I have chosen ones that remain funny and politically correct.

If you had never watched any of the above I defy you to watch them and not laugh.

But as I said above humour is very personal.

That said the humour of the above classics shines through for all to see.

Which is your favourite 1970s British comedy series? 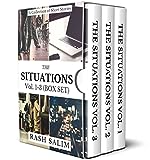