Movies for Valentine's Day That Won't Make You Sick

Book trailer for Brenda Thornlow's latest novel Life, As Is!

Most people assume girls love Valentine's Day and I'm sure a lot do. I'm not one of them...seriously, I'm not. I'm not bitter or anything, it's just not my thing. When my husband and I started dating he wasn't sure whether to take me seriously or not when I told him I had no interest in Valentine's Day. I'm pretty sure, like most men, he thought I was testing him to see how romantic he could be then when Valentine's Day came and went without a romantic gesture all hell would break loose. In order to avoid any possibility of this happening, he played it safe and bought me a present. Of course he was smart enough to consult one of my girlfriends on what to get me and she, knowing me better than most people, made sure it was right up my alley and not schmaltzy. For those of you who are curious as to what he bought me, I'll just say she advised him to make a trip to one of those "specialty stores" in the East Village of Manhattan (the locals know what I'm talking about). Being a good girlfriend and knowing my disdain for this holiday, she gave me a heads-up that I would be receiving a present. I thought this was sweet of him yet at the same time rolled my eyes because this meant I had to take the time and pick out a card for him. I know, I'm a horrible girlfriend! Since he does love chocolate I threw in a box, as well. Since then, he's gotten to know me and knows that Valentine's Day is not a stressful occasion when in a relationship with a woman like me. It's a day that can easily come and go without my even realizing it. He does buy me a box of chocolates on that day but remember, he loves chocolate, too. So when he hands me that cheesy heart-shaped box he follows it with "open it I want a piece." And I'm perfectly satisfied!

Needless to say, I'm also not into romantic movies either. However, some of my favorite movies do have some romance in them. No I'm not talking about the ones that feature Katherine Heigl or Hugh Grant. Those are the one that follow the formula of lonely-heart girl meets obnoxious guy and hates him, then he does something to woo her and she falls for him, then she finds out he's somehow full of crap and hates him again, but all of a sudden the tables turn and she loves him forever. My favorites are a little more on the irreverent and unconventional side. So if you are in a relationship where your partner just does not have that soft side to him/her or if your are the one in the relationship tolerating this holiday, here are some of my favorites that you can suggest. They may need to be paired up with a more traditional romantic movie if you plan on staying in and doing a full movie night, and if that's the case for you, throw in an alcoholic beverage and you should be good to go.

Not only can this be a hysterical addition to your Valentine's Day, but it's great for Christmas as well since this is when the movie takes place. Chris Bander (Ryan Reynolds) was a shy and overweight kid in high school who was in love with his best friend Jamie (Amy Smart). Sadly, on their last day of high school she breaks his heart by telling him she loves him only as a friend, sending their relationship into the "friend zone." Ten years later Chris is a hot-looking music executive in Los Angeles. While on a plane trip across country, he inadvertently ends up visiting his hometown in New Jersey due to a malfunction on the aircraft caused by Samantha (Anna Farris), a ditzy pop singer he represents who has a scary, yet hilarious, obsession with Chris.

During this, long-overdue visit home Chris runs into his former best friend, Jamie, whom he hasn't seen since graduation and he decides it's time for some payback. When he realizes his payback was childish, Chris attempts to start over as friends then realizes he still may have feelings for her. Enter Dusty, played by Chris Klein. Dusty, once a high school geek in love with Jamie, also grew up to be a successful hunk and is also out for revenge against Jamie for turning him down in high school! The rival between Chris and Dusty is beyond entertaining, especially as Chris's high school insecurities come back to haunt him, knocking down the "successful music executive" persona with which he rolled into town. Add to this comedy of errors, Chris's attempt at keeping Samantha (Farris) distracted and away from him as he tries to woo Jamie.

Ryan Reynolds and Amy Smart have some undeniable chemistry in this movie. Aside from being a great comedy this movie has some very sweet moments and addresses the question of whether or not a man and woman can ever wiggle their way out of the "friend zone" once it has been established.

This comedy features some of my favorites actors/actresses: Cameron Diaz, Christina Applegate and Jason Bateman. Christina Walters (Diaz) is a commitment-phobic party girl who meets Peter (Thomas Jane) while she's at a nightclub with her two girlfriends played by Christina Applegate and Selma Blair. Peter, who is at the nightclub for a bachelor party, makes an impression on the normally jaded Christina when, after insulting him, he calls her out for being a game-player who toys with people's feelings because she's too scared to get close to anyone. Realizing he's gotten under her skin she apologizes to him and makes small talk until its time for him to leave with his brother (Jason Bateman) who tells Christina he's getting married and Peter is going to be his best man. The next day Courtney (Applegate) sees the impression Peter made on Christina and convinces Christina to take a road-trip to the small town where Peter's brother is supposed to be getting married to see if this Peter just may be "Mr.Right. Their road trip turns into the ultimate comedy of errors from the moment they hit the road to the moment they none-too-subtly crash the wedding and Christina gets the shock of her life.

Now, this sounds like it might be your typical "chick-flick," but don't be fooled! The friendship between Christina and Courtney is not the cutesy, girly friendship you see in most romantic comedies and their banter is more gritty and realistic. This movie has it's sweet moments when you see Christina beginning to question whether or not she's tired of playing "the game" and ready to allow herself to become close to someone. However I have to warn you, this movie is not for the faint of heart or anyone with a weak stomach! 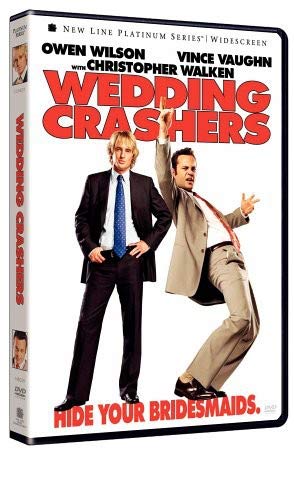 It has "Wedding" in the title plus Vince Vaughn and Owen Wilson star in it so you know it will be hilarious and have some romance! Jeremy Grey (Vaughn) and John Beckwith (Wilson) are two bachelors that regularly charm their way into weddings in order to meet girls without giving away their true identities...so no strings attached. When they crash the biggest wedding of the year which happens to be for the daughter of the U.S. Secretary of Treasury (Christopher Walken), John breaks his own rule by falling for the bride's younger sister and maid of honor, Claire (Rachel McAdams). Meanwhile, Jeremy charms the other sister, Gloria (Isla Fisher) with whom he finds out the hard way is a "stage-five-clinger." Secretary Cleary (Walken) is impressed by both John and Jeremy who have both made up admirable stories about themselves and invites them both to a weekend at the family estate.

While at the estate, Claire's fiancé, played by Bradley Cooper, is suspicious of John and Jeremy's intentions and intends to get to the bottom of everything. And Jeremy will soon find out that Gloria is not the only unstable and clingy member of the family. John and Claire are cute on screen but, personally, I love the turn that Jeremy and Gloria's relationship takes later in the movie...not at all what you think! Will Ferrell makes a cameo appearance in this movie as John and Jeremy's mentor and Ellen Albertini Dow is hysterical as Grandma Cleary.

Brenda Thornlow was voted one of the 50 Great Writers You Should Be Reading for 2015. She is the author of the new fiction series My Life as I Knew It; The Revolving Door; A Godless Love and her memoir, My Short-Lived Life at Being Perfect. Available at Amazon. (Link below)