Video Rewind: May the 4th Be With You

Whenever the Fourth of July falls in the middle of the week, everyone is thrown off with their plans to celebrate. Fortunately, Hollywood has you covered.

During the 1970’s, made for television movies were very popular and these two dramas were pretty popular, especially during the disaster era.

Driving around the corner these days can be dangerous, but for the victims of Smash-up on Interstate 5, their holiday weekend ends in a multi vehicle crash.

After a spectacular opening, the movie is then told in flashbacks.

Also along for this ride to higher insurance claims are Buddy Ebsen, Harriet Nelson, Scott Jacoby, Vera Miles and David Groh as the trucker who saves her from a gang of bikers.

As a hurricane gets closer to shore, pregnant Diana Canova starts having disastrous premonitions in The Death of Ocean View Park.

Fearing she’s going crazy, no one believes her. Everyone chalks it up to hormones, which incidentally kick in for snack stand employee Mare Winningham.

The shy Winningham meets sailor Billy (Perry Lang) and she agrees to go out with him. His intention is to have sex while on shore leave, considering he had “problems “ the night before.

Co-owners Martin Landau and Mike Connors are at odds with one another. Landau doesn’t think the impending hurricane will harm the park, while Connors is worried something dreadful is about to happen.

While Ocean View is getting ready to slip into the sea, it did see prior disaster in the thriller Rollercoaster, which starred George Segal and Timothy Bottoms.

Bottoms plays a cat and mouse game with Segal as he plants bombs on rollercoasters throughout the country. His first target just happened to be at Ocean View.

The Ocean View attack is probably the most most graphic as The Rocket flys off the tracks causing death and destruction. It’s also comical at the same time since the victims are obviously dummies.

As Harry chases the young man across the country, they end up at Magic Mountain where The Revolution is set to open. Harry doesn’t know it, but his daughter (Helen Hunt) is in line for the coaster.

Since the Fourth is smack dab in the middle of the week and you don’t have any concrete plans, why not trek over to Midwood Mall for some opening sales?

Even though Midwood just opened a few days ago, Mayor Karen Wilton (Morgan Fairchild) and Harv Posner (Jonathan Goldsmith) are inviting all investors to the gala investors party. Who needs fireworks when you can have Phantom of the Mall: Eric’s Revenge instead?

Prior to groundbreaking for the mall, Melody (Kari Whitman) watched in horror as her boyfriend, Eric Matthews (Derek Rydall) was killed in a horrific fire at his house. Ironically, the mall was built on the property.

When Melody gets a job as a waitress, she goes to her locker and after opening it finds her favorite orchids inside. Eric was the only one who knew that she loved these flowers.

As weird things begin to happen at the mall, Melody knows that Eric wasn’t killed and has been living at the mall in his own little lair.

Steamy and sultry come to mind when you think of Cape Fear.

While the performances are top notch, much credit needs to go to production designer Henry Bumstead and cinematographer Freddie Francis. They capture the oppressive humidity known throughout the south during the summer months.

Even though you may not physically sweat during the length of the film, the actors on screen will do it for you. From the racquetball scene to the shattering climax, you’re be on the edge of your seat as they perspire for you.

Of course you can always go to the beach where that rogue killer fish is hanging for his next meal. 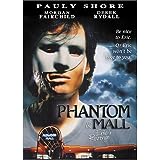