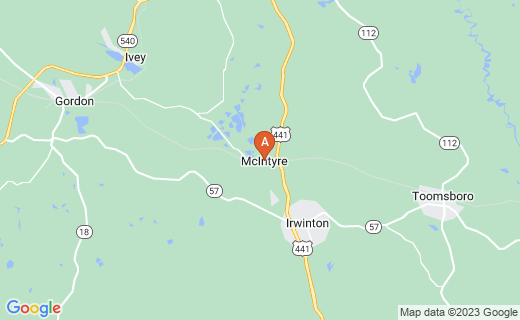 McIntyre Is a tiny town in middle Georgia, U. S. A. It is approximately 15 miles south of Milledgeville, Georgia. According to Google maps, the town is only 5.4 square miles. Five years ago, I doubt many tourists frequented this town. Now, thanks to reality television, curiosity is drawing visitors to McIntyre.

Living in the state of Georgia, I frequently travel Highway 441 that travels a north - south route through the center of my state. Recently, I stopped for lunch at Subway, in a convenience store directly in front of "Honey Boo Boo's" house.

The little white house looks exactly as it does on television. Last years Christmas lights are hanging, ready to be lit again for 2013. The railroad track is so close to the house, that it must be very hard to sleep at night if a train comes by. A single strand of police tape serves as a fence to keep tourists at bay.

Directly in front of the house is the back parking lot of a "Flash Foods" store. This store is where the "Subway" sandwich shop I mentioned previously is located. I recognized the clerks in the store from the show. It is fun to get a sandwich, and watch for a little reality show action.

Who is your Favorite McIntyre Celebrity?

Although McIntyre is small, the town is not isolated. There are large cities and attractions nearby.

Milledgeville is only 15 miles away, and is home to two colleges, Georgia College and State University, and Georgia Military College. It is home to Lake Sinclair, The Old Capitol Museum, The Georgia Veterans Cemetary, an Art Gallery, History Museum, and other things to do.

Macon is only 23.4 miles away. There you will find Mercer University, an Art and Science Museum, and the Georgia Music Hall of Fame,

Albany is farther away than the other cities I have listed. It is 104 miles to the southwest. I am mentioning it though, because Albany is home to Sherwood Baptist church, and has produced several very popular Christian movies, including fireproof.

Atlanta is 111 miles northwest of McIntyre, and Savannah is 148 miles southeast.

Everyone loves a festival, and rural Georgia is in exception. In an episode of the show, the family is shown attending the "Redneck Games" in Dublin, GA. These games started the same year that the Olympic Games took place in Atlanta. This was 1996. The "Redneck Games" continued for 17 years, but we're not held in 2013. There are other festivals, though, that are just as fun.

I'm sure there are more festivals, and fairs that I haven't mentioned. Check with a local calendar for the dates that you intend to visit.

I did not see any hotels, motels, or bed and breakfast's, while driving through McIntyre. Later, I found out that there is a place to stay in McIntyre. It is a hunting lodge, and looks like a comfortable place, if hunting is your game. Rocking chairs grace the wide front porch.

If you are not into hunting, there are many other places to stay in the towns I have listed that are nearby. If you like camping, there is a campground at Lake Sinclair, in Milledgeville. Also there are state parks within driving distance.

Following are some links to a few places to stay. I think you will enjoy visiting this area.

This is My Crazy Family
Buy Now

I would like to add an update to this hub for 2015. Honey Boo Boo was not renewed by TLC.

Recently, on a trip to North Georgia, I drove by the house again. The house now appears empty.