Waiting For the LEXX Spin-off

When Star Trek was cancelled in 1969 many believed it was the end for the series. Phenomenal ratings for the syndicated reruns convinced Paramount to revive the series as movies and then as the spin-off series "...The Next Generation", "Deep Space Nine", "Voyager", and "Enterprise". Today it is accepted by fans of science fiction television that cancellation is never the ending and that a revival, spin-off, or reboot series is just a season or two away. But this is rarely the case with cult series. "Star Trek", "Doctor Who" and even "Battlestar Gallatica" became franchises because they had hundreds of millions of fans. Even so it took ten years and the success of the movie "Star Wars" to get Paramount to finally produce the first "Star Trek" movie. "Doctor Who" was off the air for 16 years before BBC brought it back ( Nine years if you count the one shot pilot movie made for the Fox network ). and "Battlestar Galatica" remained off of television for 23 years until the reboot in 2003. Cult series generate only a few million viewers. They usually return either because some struggling cable network has the budget to produce the series and needs to bring in viewers, or because the DVDs are best sellers. Although Lexx episodes on DVDs have sold well they have never been best sellers like "The Family Guy". Another problem is that the series producer and creator Paul Donovan is not that interested in reviving it and has apparently retired from show business altogether. And yet with five years passing since the series went off the air die hard fans continue to hope for some sort of continuation.

One problem though. Who would finance a spin-off? It was just dumb luck that Lexx has made it to four seasons. Originally conceived as a series of two hour made for cable television movies called "Tales From a Parallel Universe" Lexx was produced by Canada's Slater Street Films but financed for the most part by America's Showtime network as well as many European television networks who together paid for the show's production. Showtime agreed to four movies then no more, and it looked like Lexx was finished until Donovan reorganized the series as "Lexx" a weekly series of hour long episodes shot on a tighter budget. Fans of the original series did not care for the cheaper special effects and production values, nor liked it when cast member Eva Habermann was replaced with Xenia Seeberg. With Showtime not interested in more Lexx movies it would take two years before the hour long episodes were filmed by which time Eva was already working on another television series. In many countries Lexx lost viewers and was cancelled in some of the countries that carried it and there was doubt that a next season could be made. But then in 1999 Donovan was able to find a second cable network to pick up the show, the new Sci Fi channel. New money coming in meant that they could afford a 13 episode season after which Donovan hoped to talk Sci Fi into financing the season after. But for a while Sci Fi was not interested. When they bought the rights to the series they discovered that the first four movies which counted as the first season were exclusive to Showtime. They also discovered that Habermann was written out of the series and decided they did not want to confuse their viewers with a character that leaves after two episodes. They made a decision to only air episodes that featured Seeberg as Xev, but found they could not air all the episodes because the season's story arc with the villain Mantrid's plan to destroy the universe began in the first episode with Habermann. Episodes where Mantrid's drones showed up were not shown which limited Sci Fi to four episodes which they repeated a few times before finally giving in and deciding to air the entire season in it's correct broadcast order. Sci Fi also decided to negotiate with Showtime to allow them to air the first four movies. In late 2000 Sci Fi had completely aired all but one of the 20 episode second season ( skipping the episode "The Web" as redundant ) and the week the season finale was scheduled to air had also aired the first four movies as a week long special.

The following week Sci Fi aired the first episode of the third season. When Donovan realized he would only be doing a 13 episode season he decided to release it as a single story broken up into chapters about the Lexx being trapped in an orbit between the planets of Fire and Water. Many viewers were upset with the single story format and once again viewership dropped off leading to more cancellations. Sci Fi decided to air only half the third season and to keep the second half banked to air a year later in 2001 pulling the series from the air. It was not until Sci Fi aired the second half of the third season that they decided they wanted a fourth season. In fact they wanted it enough to bankroll 24 episodes. Donovan decided that this would be the final season for Lexx and in the last episode pretty much ended the series for good. In the final months of filming season 4 there was talk of Sci Fi wanting a possible spin off series involving some of the Lexx characters. There was also an announcement that there would be an official Lexx comic book that would pick up where the series left off and even a rumor of an animated series and a possible theatrical movie. But ultimately a combination of no one interested enough in financing a spin-off series and Donovan not interested in continuing the franchise. Plans for the comic book also fell through when Donovan and the publisher could not agree on the direction the book should go. Since then the franchise was as good as dead.

However a revival is not impossible. A long delayed syndication deal would allow hundreds of millions of viewer's who did not have either Showtime or Sci Fi the opportunity to see the series. Donovan had hoped to syndicate the series as soon as Showtime's broadcast rights to the first four movies expired and they could be edited into eight one hour episodes bringing the series to 65 episodes. Of course stations would be stuck with the two part story begun in "The Web" and ending in "The Net". Basically "The Net" is the same episode as "The Web" only showing a few scenes that the first did not have and tacking on an ending that the first was missing. Sci Fi did not think their viewers would appreciate watching the same episode two weeks in a row with only a few minor changes the second week and chose to instead air only the second part. An argument could be made that "The Net" becomes a completely different story once you realize that one of the characters is possessed by an alien life form. But it is doubtful that all viewers would agree. But all hope for Lexx going into syndication ended on February 1st 2004 when during the Super Bowl XXXVIII half time show Justin Timberlake removed Janet Jackson's top briefly flashing one of her breasts. The nip slip seen around the world eventually resulted in more restrictive censorship on television which meant no chance of the Lexx series ever being seen outside of cable and little chance of standard cable airing the show during prime time. As the reruns disappeared from television and no word on what became of the spin-off fans began to blame Atlantis Alliance, the company that bought Slater Street Television and ended up owning the rights to the series claiming that some sort of grudge they have with Paul Donovan has them deliberately keeping the series off of Television and DVDs.

This is far from the case. The initial DVD release of Lexx was a mess. Showtime had the home video rights to the first four movies which they sold along with a bunch of other movies to Paramount who in turn saw them as straight to video VHS movies. The rights to the rest of the series remains separate and were eventually sold to a company called Acorn. Paramount had no plans to re-release the series on DVD so the only way to get the complete series in the United States was to buy expensive out of print copies. Recently the rights to both Paramount and Acorn ran out and Atlantis Alliance decide to release the series on their own label Echo Bridge. So far with very little fanfare they have released the first four movies as season one and plan to release the next four seasons as soon as the overstock from the Acorn releases runs out. And with the Janet Jackson incident slowly fading into history there is once again a possibility of syndicating Lexx in the United States. Both the new DVD releases and syndication of the entire series should open it up to a brand new audience, some who did not have the Sci Fi channel during it's initial run and others who were too young at the time. If Lexx is able to build a following then there will be some sort of pressure to turn it into a franchise. But what kind of franchise? With "Star Trek" Gene Roddenberry created the futuristic universe of The Federation that future producers could build on. Donovan had also built a fictional universe for the Lexx but then had it destroyed along with every planet the Lexx ever visited. However, seeds for a spin-off are evident in the final episode of Lexx. For no apparent reason two characters that by every right should have been killed named Bunny and Priest manage to survive the carnage thanks to being helped by the evil Isambard Prince. There was no reason for these characters to survive as this was to be Lexx's final episode other than Donovan wanting to use them for a possible spin-off. But would the spin-off be the future adventures of the villains from Lexx or the adventures of Lexx's surviving crew with Prince, Bunny, and Priest dropping by from time to time to cause trouble? And now that five years have passed which actors, if any, would still be willing to be part of a spin-off? 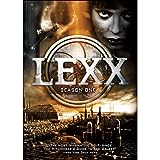